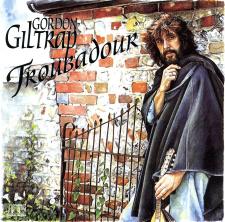 play
1.
A Misunderstood Man / Be With Me Always
2.
Rain in the Doorway
3.
On Camber Sands
4.
The Lord's Seat
5.
Rainbow Kites
6.
Who Knows Where Tomorrow Goes
7.
Isabella's Wedding (Heathcliff's Wedding Song)
8.
Quest for Nonsuch
9.
A Dublin Day
10.
Down the River
play
11.
The Picnic
12.
Daisy Chain
play
13.
Nursery Chimes
14.
The Kerry Dancers
Update Feb 2010
CD no longer widely available, however this cd appears as part of re-release EDSX 3007 along with a DVD of Gordon live in Ventor 2008.

Troubadour was originally realeased on the K-Tel label ECD 3390 in 1998 as a single cd.

String arranger Del Newman has done a potent job on the original Troubadour cd; his lush scores serve the music well, but occasionally the strings, flute and horn distract the listener from the real treat: the guitarist's playing. Gordon Giltrap is still among the strongest in acoustic guitar. His light touch and 'less is more' approach wrap you in a warm cocoon.

The album contains two cuts by Tim Rice, excerpts from Heathcliff which Giltrap performed live on every night of the British production of the play.

All the other pieces are original songs, except for the traditional 'Kerry Dancers' closing the set. His melodies are always strong and evocative, requiring very little or no accompaniment at all. That's why the solo CD is in some ways superior and a welcomed addition.

The wonderful original artwork by Sue Martin has been used as the theme for Gordon's new website.