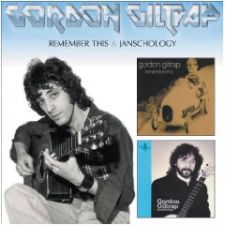 "Remember This" (2003) features Gordon's renditions of songs and melodies that influenced him in his youth, from three pieces by J.S. Bach, to Cliff Richard and The Shadows, to The Beatles and The Who. Rick Wakeman guests on two songs.

Electric guitar on "Substitute": Neville Marten
Flute on "Minuet": Hilary Ashe Roy
Keyboards on "Isabella's Wedding": Rick Wakeman
Keyboards on "Down The River": Rick WakemanGordon Giltrap played everything else on all the other tracks.
Mastered: Paul White
Recorded: Elversound Studios except tracks 15 / 16 recorded by the BBC


"Janschology" (2000) is an homage to another of Gordon's heroes, Bert Jansch, from its cover to its contents: Gordon plays five pieces written by or made famous by his friend Jansch, along with his self-penned tribute "Roots".

The booklet contains annotation by Gordon himself, as well as many family photos and ephemera from his own archives.