From Brush And Stone - Gordon Giltrap and Rick Wakeman 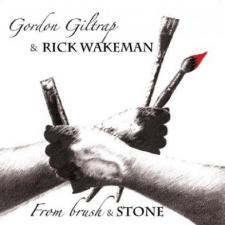 What can one say about Rick Wakeman that hasn't already been said a hundred times?

Rick has been in my consciousness since the early 70's when he joined 'The Strawbs'.
I remember him being interviewed by a journalist friend of mine, Steve Turner, shortly after he left The Strawbs for superstardom with 'Yes'. Steve told me the interview had gone well "and by the way, Rick sends his regards." Obviously I was very touched by this, bearing in mind I hardly knew the man!

Our paths have crossed many times since those early days and in 1993 Rick, together with
Brian May, Midge Ure, Neil Murray and fellow 'Yes' member Steve Howe, contributed to my updated recording of 'Heartsong.'

Over time a strong friendship has built up. What comes across from Rick is not only his superb musicianship but his quality as a fine human being, a quality that for me is equally important. So here we are, all these years on. Finally collaborating on a recording. The process brought me much pleasure and also presented me with quite a challenge. Well, it would do wouldn't it! Especially when one is presented with seven outstanding virtuoso piano pieces from the pen of one of THE great rock keyboard players of all time!

The are many great guitarists but few who are unique.

Gordon Giltrap is certainly one of the few who can genuinely be classed as being in the 'unique' category. He is also in that even more rare breed of guitarists as he actually listens to what other musicians around him are doing.

When Gordon first sent me his racks to work on they truly inspired me to write my suite with him very much in mind, leaving space for his talent to shine through. Neither of us gave directions as to what to play and that, to me, made it so exiting when getting my tracks back from him. Gordon did things I would never have thought of. "Leave it to the expert" is something all musicians can learn from and I never stop learning, that's for sure.

I am very proud of how this album has turned out. It was not commissioned; it was under no time constraints either. It was done because we wanted to do it. Musically it evolved in the most natural way.

In other words, it was done for all the right reasons….. another rarity in today's musical world!

Once you get your CD, the observant ones amongst you will quickly realise that the recording on the disc has Rick's tracks first, followed by Gordon's, whereas the track listing on the cover gives them as being the other way round. Many apologies for this error which will be corrected shortly. This does however make the first few discs that were sent out even more collectable due to the error !!

Special thanks to Malcolm 'Mad Malc' Welch who has wanted this collaboration to happen for over a decade.
Tweet