Gordon writes: The last time that I was at Butlins in Skegness was with my two children Jamie and Sadie in 1981. My then girlfriend at the time thought it would be a great idea for me and the kids to spend some time together just the three of us. Believe it or not the Butlins experience was  was fun!

Since that time the place has had a complete facelift. We attended with friends Cath and Geoff Olner and Sue and Mike Holton. It was great to see old friends Hunter Muskett who opened the festival on a very cold Friday evening. They played a lovely set and were followed by The Strawbs who likewise did a great job. Once again it was good to see my old bass player Chas Cronk and guitarist Dave Lambert again after so many years. Also lovely to see Jerry Donaghue and Doug Morter again so soon after Ullapool.

You can listen to an interview recorded at the GBFF here 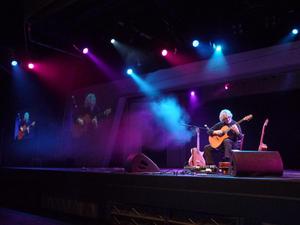 I thought it would be good to catch part of Donovan’s set. I even plucked up enough courage to try and chat to him backstage, so during the interval I went back to see if this was possible. I gave my name to security and they passed it on to Don who said “yes it would be nice to chat after the show”, so I returned later only to find that he had left pretty much straight after the concert. Hey Ho, I obviously wasn’t meant to meet the great man!

For obvious reasons I am the last person to comment on my performance on Sunday afternoon. All I can say is that it was a thrill to be playing in front of two thousand plus people and to have been so well received. I think we can say that the whole festival was a great success and I sincerely hope they do it again at the same venue.

Comments about Gordon at the Festival found online include:

For me, the highlight was Gordon Giltrap. A brilliant technical set as you would expect (but was it folk or prog rock)

What a great weekend- Gordon Giltrap proved that the rest of us strummers and pickers are mere mortals.

Sunday afternoon opened with Gordon Giltrap who was outstanding 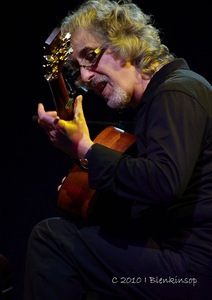 A big thumbs up also to Gordon Giltrap

Highspots for me included Gordon Giltrap with a really terrific set

The wonderful Gordon Giltrap who started off day three with some breathtaking guitar wizardry.

Oh yes, Gordon Giltrap - amazing guitar wizardry and I can't quite fathom how he does all those different clever technical things at the same time and keeps it all in sync. I thought men couldn't multi-task?