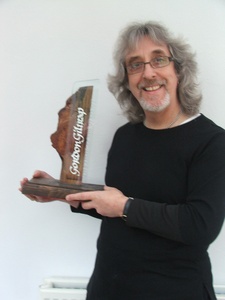 Being the recipient of a Life Time Achievement Award is indeed a lovely feeling, especially after SO many years of being totally ignored on the award front. It is quite ironic that the land of my grandfather's birth should honour me such, making it significantly special for me.

As folk who are familiar with my music and the associated stories surrounding various compositions will know, my paternal grandfather was a Cork man, who along with the entire Giltrap clan (well almost) moved to these shores at the tail end of the 19th century, probably to escape the terrible poverty that existed in Ireland in those days. My grandfather joined the Royal Artillery as boy soldier, he was 14 at the time, and rose through the ranks to reach the lofty heights of Bugle Major in the Artillery band. I'm certain if he were alive today he would be quite chuffed that his youngest son's offspring should receive this accolade from his fellow countrymen!

In all honesty I wasn't that pleased with my performance on Friday, this may have been due to the lateness of going on stage, 10 o'clock which is late for me, and the fact that the Queens hall in Newtownards is quite a large venue with terrible acoustics, but having said all that, the small but appreciative audience were lovely, and shared in my special evening most royally. 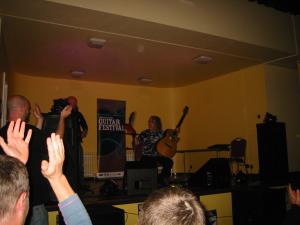 I obviously knew that I was a nominee for the award, but never assumed (a thing you learn in life) that I would be privileged enough to actually get it, but as I was about to play my last number having just been given the 'five more minutes' signal from the side of the stage, two gentlemen came out to explain what was about to happen and lo and behold I was being handed the most beautiful creation of glass and wood with my name on, that anyone could wish to receive. 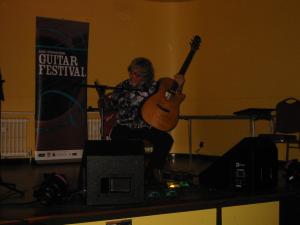 I then of course had to say a few words, play my encore and graciously leave the stage. Sharing the bill with me on the night was the stunning Bob Brozman, and a fine young South African guitarist called Guy Buttery. Because of my mid afternoon appearance at Bewdley the following day, I was driven straight to Dublin airport in readiness for my 6-30am flight back to Birmingham, so there was no time to celebrate my getting the award, and after two hours sleep I arrived back in the UK a little worse for wear it has to be said.


I'm hoping to get a few more pictures for you from the night, but in the meantime here are a few pics taken on my friend David Millar's camera of the event plus a couple with David back stage. I have to say that the last time I saw the award was when my old pal John Martyn received it four years ago when I shared the bill with him at the very same festival. I had forgotten how beautiful a thing it is, and it now takes pride of place on our oak sideboard in the lounge. 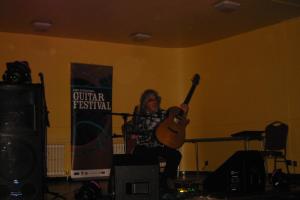 A funny thing happened when I was bringing it back to the UK and it had to go through the scanning machine at the airport, and one of the officials asked what it was, it was incidentally well wrapped in heavy bubble wrap and secured by good old gaffer tape. I told him it was an award, and when it finally passed their scrutiny a lovely lady who was privy to this conversation said to me 'congratulations on your award.' How lovely eh ? Almost as lovely as the coloured lady at the ticket barrier at Brum airport on my outgoing flight who to turned to me and said. 'You look like Billy Connolly innit'. 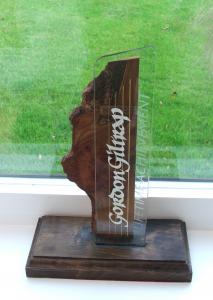 A fine few days to remember and a word of thanks to Ivan Preston my host for the afternoon who drove me to his wonderful guitar shop in Belfast, The Belfast Guitar Emporium where I viewed first hand the lovely glass engraving of myself along with Hendrix, Rory Gallagher and Jimmy Page. This was followed by a guided tour of the outlying countryside near Bangor, the current home of Van Morrison, and a superb lunch of fresh fish and chips!

I sincerely hope that the festival continues next year, and one never knows I MAY be asked to appear again in Northern Irelands pleasant land.