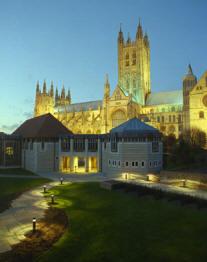 Early in 2006 Gordon phoned me ( Sue - the webmaster ) with a slightly unusual request.

He was due to holiday down in my home county of Kent with Tim and Lori Blixt who were flying over from the USA. He asked me if I knew of a charity who would like a free concert in Kent while they were there. After a few moments of head scratching, I knew I had the obvious place - if they would like to take up the offer.

Canterbury Cathedral International Study Centre is a modern building inside the Cathedral precincts, usually used for religious seminars, but on occasion they allow the main venue to be hired for gigs by selected musicians. It has it's own sound system and engineer, and having been there to several prior events I knew it was the ideal place for Gordon to play, plus it was owned by one of the biggest charity organisations in Kent.

I approached the Cathedral with the offer of a concert by Gordon, 100% of proceeds to go to a charity of their choice, all organised and advertised on their behalf. Not surprisingly they accepted the offer immediately and I set to work.

The 6th of Sept 2006 saw Gordon and Hilary, Tim and Lori, Mike and myself given a guided tour of the Cathedral during the afternoon, then meeting up with over 120 other Giltrap fans in the wonderfull octagonal hall for the evenings concert.

Geoff and Cath Olner came down from Sheffield to join the group, and it was a most enjoyable way to spend a summer's evening, raising money for the Cathedral Choir Fund.

The best view of the Cathedral had to be Gordon's view from the stage - he could look up while playing to glimpse the adjacent, floodlit Cathedral.

The Study Centre staff were very helpful and looked after us well. The evening was a great success, and raised 1294.81 for the choir fund.

Many thanks to all of you who supported this event.