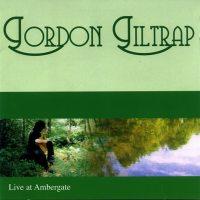 Gordon's CD "Live at Ambergate" is one of relatively few commercially released albums to use the binaural recording methods. The sound engineer concerned was Dallas Simpson, below he explains more about the technique and the recording.

This article also available as a Word file at the bottom of this page, along with a very short sample MP3.

For a number of years working as a location performance binaural sound artist I have always been seeking to extend my work. Many of my recordings are 3-D soundscapes of natural environments, yet until recently I have never had the opportunity to work in inspiring outdoor environments with accomplished musicians. Gordon is the first solo musician I have had the pleasure of working with in this way.

Binaural recording is special, it offers unique opportunities for presenting a total surround sound experience to the listener, yet in essence it can be very simple. The way I record is to insert specially modified ultra miniature professional quality microphones into my ears. So the recorder actually samples my hearing and by listening on high quality headphones, you are effectively listening through my ears. This enables you to hear full surround sound, above, below, sides and to the rear, it is a simple realisation of the magic of our natural perception of hearing.

So the challenge for me was to bring my binaural recording technique to bear on the virtuosic lyrical playing of Gordon. As I had worked with Gordon on a number of occasions mastering re-releases and new albums, I felt that his music owed a lot to experiences of the English countryside, so I was looking for an opportunity to invite Gordon to participate in such a project.

A few years ago I was engaged in some experimental binaural recordings, with a number of artists, including Gordon, at Lincoln cathedral. We had a very exciting trial run with Gordon in a small chapel at Clumber Park and in the grounds outside, but sadly his session at Lincoln was a bit of a disaster as one of the transept windows, to the side of where we were set up at the centre of the cathedral, had all the glass removed for restoration and just before the recording session there was a massive thunderstorm! Inside the cathedral the temperature dropped, Gordon had great difficulty in playing, and it was decided afterwards that none of the recordings were of a suitable standard for release.

However, it gave me an opportunity to suggest to Gordon that we do an outdoor binaural session in the summer when the weather was warmer.

Accordingly the session was arranged, and we met and recorded for two days at Shining Cliff Woods, Ambergate in Derbyshire on the 20th and 21st of August 2002.

The first day was spent up near the top of Shining Cliffs. There was a very subtle acoustic of reflected sounds from the rock faces, occasional birdsong, occasional wind stirrings in the trees and a few "odd noises"! Perfect. Well almost. I had provided a wooden chair for Gordon to sit on and because the ground was soft, and much to my embarrassment, the chair gradually sunk into the ground as the day progressed, which meant that Gordon had to adjust both the chair and his playing position. However, despite this minor situation, he played well and we were both satisfied with the result.

The second day was spent down by a small lake nestling in a depression not far from the cliffs, but further down the slope, flanked on one side by birch woodlands and rippling, gushing, hissing streams. Again the sound reflections from the trees and surrounding slopes was very subtle, yet of a very specific character and Gordon chose different playing positions giving different "atmospheres" to his playing of different pieces. This is one of the most beautiful pastoral locations I know and it certainly brought out an intense response in Gordon's playing.

My approach to this recording revolved around two central concepts:

1) To capture Gordon's playing in a way that involved a dialogue with the environment. I wanted to have the music moving around the listener as a kind of organic ballet, a sonic embrace, with some close-up and more distant moments. Some movements would be more brash and informal, others more subtle and well defined.

2) To create a sense of journey - to take the listener on a moving sonic narrative through that magnificent lush woodland, with Gordon's music appearing as "living elements" at critical points throughout the journey.

This involved some challenging "spatial choreography" - the organising of the movements of sounds in three dimensional space. Bear in mind that for every moment of Gordon's playing and during every second of my recording I have to use "non turbulent" breathing and carefully control my movements to be as silent as possible. Working within a woodland, with inevitable scattering of leaves, sticks and other objects on the ground does make this difficult, even when walking in socks there are a few minor sounds, but these occasional "accidentals", together with the intentional footsteps, add realism and presence to the situation. The only real annoyance was passing aircraft and many a good take was ruined by an untimely fly-over. Fortunately our patience held and with professional dedication we were able to complete the task in the two days allocated.

Basically the movements are created live during the take by me moving in relation to Gordon who is sitting or standing still and playing. For the final CD we chose the best performances, and then each performance was blended into a walk through the woodlands, which I made at dawn on 22nd August.

Philosophically I am trying to liberate musical performance from the confined, restrictive space of a theatre, hall, or other enclosed area and bring the music into a state of purity through an intimate dialogue with the realm of nature. Here the audience is the environment and the artist is inspired by the intensity and beauty of the moment. It is a communion of soul and spirit with the world of creation.

I hope you enjoy it!

Recorded using custom modified DPA 4060 sub miniature microphones (with thanks to Ralph Dunlop of the Sound Network, London) direct into a NAGRA V hard disk recorder at 24bit 96kHz resolution (with thanks to Ken Fooks at Nagra Kudelski (GB) Ltd). Edited and mixed and mastered using the SADiE 24/96 hard disk editing and mastering system from Studio Audio of Cambridge.