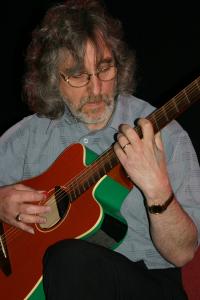 Gordon playing an RA1 prototype in 2005

Secret Valentine is a studio album of 15 romantic Gordon Giltrap tracks. The whole album was recorded on the Cool Acoustics / Rob Armstrong hybrid acoustic guitar discussed on this page. For details of the CD, with track listings and audio samples please see the Discography section


28th - 30th March 2007
saw Gordon in Frankfurt at the Musikmesse trade fair,
where British inventors are showcasing a range of innovative, high quality acoustic and electric guitars made almost entirely from polymers.

Gordon says " On the 28th of March I flew to Germany with Dr Owain Pedgley from Loughborough university to meet with various major makers to discuss the licensing of the polymer material for making guitars. I'm delighted to announce that the trip went VERY well, and we already have two major guitar makers in the frame, one is still in the discussion stage and the other is almost 100% committed to moving this exciting project forward.

My role in the whole enterprise as a consultant / ambassador for the University is proving to be very effective (so they tell me) I believe my endorsement of the whole project somehow gives it that much credibility. The way things stand at the moment is that we are awaiting Rob Armstrong to complete the first of five prototypes, once the first is complete then my job will be to produce an album to demonstrate how effective the material can be in the manufacture of acoustic, and at a later date electric instruments. For confidentially sake I can't really reveal the major companies that we are in dialogue with, but what I can say is that potentially it's quite exciting. I think we all know that at this point in time a fine instrument made from the best woods can't really be eclipsed sound wise, but the hope is to produce a really affordable instrument with a unique sound."

The first prototypes to use the novel 'bubbled' plastic were revealed at the Frankfurt Music Show in 2002. Inspired by the deluge of public enthusiasm and commercial interest, design researchers Owain Pedgley and Eddie Norman have been perfecting their invention. They have also continued to draw upon the input of master craftsman Rob Armstrong, guitar maker to The Levellers, Fairport Convention, Gordon Giltrap and the late George Harrison. 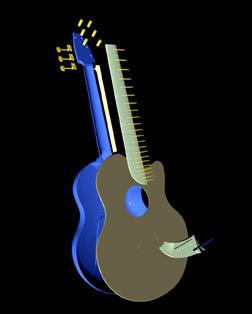 So why use plastics? Polymers are easily moulded, so fewer parts are needed resulting in greatly simplified assembly. The use of non-wood components also opens up radical approaches to instrument design, construction and finishing, and eases pressure on wood supplies. And most importantly, the sound quality achieved due to the millions of bubbles in the polymer is extraordinarily good. 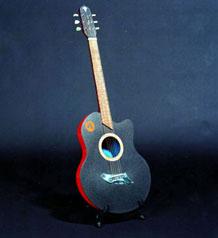 Norman and Pedgley, now an R&D Industrial Designer based at the University of Sheffield, have worked closely with the renowned guitar maker Rob Armstrong, who provided expert design advice, helped steer the process of materials selection, and contributed to the building of the prototypes. Armstrong's endorsement the guitar carries his name and logo persuaded the leading musician Gordon Giltrap to try out the new instrument.


The key to the guitar's design process was in the answer to a broad question: what physical material properties make a good soundboard? Rob Armstrong's advice was crucial. He argued that the aeration of a soundboard makes a significant positive contribution to the tone of a guitar, irrespective of the orientation or inherent stiffness of any fibres in the soundboard. Armstrong's conviction led Pedgley to experiment with expanded polymers, the most promising of which became the material of the guitar's soundboard. To provide strength, the soundboard is married to non-expanded polycarbonate components. The expanded material provides the instrument with a cellular, lightweight vibrating plate, whilst an X-shaped bracing pattern provides the necessary stiffness to withstand the tension from the steel guitar strings.

For more details on the polymer guitars read the article below, which appeared in the Guardian newspaper in Oct 2006, or click the link to hear some audio samples.