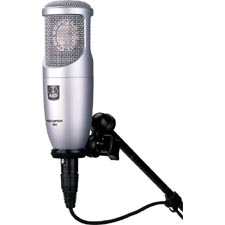 One of the topics discussed recently on the Guitar Anorak's Forum of Gordon's previous website was microphones.

The thread below has been reproduced here as it contains plenty of useful advice and information supplied by various knowledgeable contributors from the Forum group. It is reposted here for information only.

Gordon himself did not contribute to this discussion, and it is not intended to be a recommendation for a particular product or retail outlet, as such things change frequently.


Discussion thread
JOHN KELLY:
I bought a Tascam us-144 (includes cubase software bundle) audio interface last week to record on computer. Basically a 4 input simultaneous, that can record guitar direct, two xlr inputs ( with phantom power option ) and two mic / direct inputs for other instruments. I am just learning software stuff and have already taken a simple project from recording instrument parts through to completing a music file that can be burned to cd. Amazing stuff really (paid 110 for this gizmo new!)

What I really now require is a tried and tested mic to record acoustic guitar direct into gizmo. Need advice badly, most sites suggest Shure dynamic type mic ie. SM57 / beta unidirection mic. The room I use is tiny, would it be worth buying a different type mic ie capicitor / condenser or is there an equally good mic as the Shure but cheaper? So anoraks advice needed here badly.

TIM HODGES:
I recently went through the process of choosing a good mic to record at home with and sought advice from a friend who runs his own studio. He pointed out that you can spend lots on very high quality condenser mics which will faithfully pick up all the detail of what you are playing but will also pick up anything else going on in the house and cars passing outside etc! These are really for proper, sound-proofed studio use. He recommended an SM57 as it is a little more focused on what you actually want to record (i.e. the guitar) and picks up less back-ground and will be more than sufficient quality for most of us home-recording types (unless you really want to produce something for commercial release in which case you are probably best placed hiring a studio for the actual recording anyway). Hope this is useful. Very happy with my SM57.

RUSS GANNICOTT:
Hello John, sounds to me like you got quite a lot of options here. My choice would be to stick to condenser mics though. The suggestion of using a SM57 is fair enough under the right conditions, but with just the one mic, your options will be limited and you will have little or no control over your recorded sound. For the same cost as a Shure you could buy either a matched pair of Samson pencil condensers, or a cheap large diaphragm condenser and a SM 'clone'. All available from Ebay at silly money. Best cheap, large diaphragm at the moment is probably the one by Behringer.
Good luck!

TREVOR RAGGATT:
I'd be with Russ on this. Dynamic mics like the Shure SM57 are great for live work (I use a Shure Beta 57 - the more robust upgrade of the SM57 - for vocals live with the band I play with) but they lack the sensitivity and detail which you'd really like for capturing your voice or guitar on tape. Most would recommend going for some sort of condenser mike.

The good news is that these days you can get a very decent back-electret condenser mic for about the same price as a decent dynamic mic. One thing to watch out for is that most condenser mics require some form of powering - often "phantom powering" where the recorder/mixing desk provides power to the mic via the mic cable. If your recorder does not have a phantom power facility (it may not) be sure that you look for a condenser mic which you can put a battery into.

A brand which is worth looking into is "Rode" which make very nice mics at a very reasonable price. I've got a couple of Rode mics which I've used with my multi-track and they produce a really lovely sound. However, many other makes at similar prices (AKG, AT, Octavia etc etc) will be just as good.

TREVOR RAGGATT:
D'oh... should read more closely... of course you DO have phantom power so ignore the battery warning.

Also, I haven't found that condensers are particularly bad at picking up outside ambience so long as you're sensible about it and given the choice I'd personally go for a condenser over a dynamic for recording acoustic instruments and vocals any day!

RUSS GANNICOTT:
Well said Trevor. I think the main thing to remember here is that a well placed cheap mic is worth ten badly placed expensive ones. Choose your location, experiment with the positioning of the mic, and don't forget to fit new strings! Above all, let your ears be the judge.

JOHN KELLY:
Well guys, I appreciate the effort you have made here. I was thinking condenser myself having read a wee bit about them, but the Shure Beta 57 did crop up quite few times. So I think I'll go with the majority audience vote on this on, as they say on Who Wants To Be A Millionaire. So now dilemma is how much I should pay. I will check out all of names given and read about them. In the meantime, its off to Ebay now to see whats about!

SUE HOLTON:
I found this article about mics and positioning which may be useful for you:

JOHN KELLY:
Thanks Sue, this will be useful. Like every thing else in life we learn by mistakes, so my cheapish dynamic mic ain't no good, thats for sure. It would have paid to post an entry on this site before buying this. However, I managed to get a large diaphragm condenser mic with phantom power which has switchable patterns from Dolphin Music, its an AKG perception 200- although AKG its assembled in China but still gets some good reviews but at the cheap end of the spectrum obviously, not arrived yet so I hope this works, cost 84 plus postage new. I'd seen a used one on Ebay for 90 ! so at least I get a 2 year guarantee with this one and can re sell if no good for my purpose.

The cheapest Rodes NT1a was again from Dolphin at 110.
I read the link you refered me to, good stuff, any more like that appreciated. If looking for stuff yourself I would check out Dolphin Music, as their prices very competitive (he says not actually having received the mic!).
I will post something when I try the beastie out.

RUSS GANNICOTT:
Well done John, AKG are great, as are Dolphin Music. Last year I equiped an entire studio from their catalogue at one third normal retail price! Still, don't be totally dismissive of your cheap dynamic - it will come into it's own when used in conjunction with the condenser. The best value for money dynamics I am currently using are Behringer X1800's - I've got twelve of them! Mind you, they do only cost twenty five quid for a box of three!

TREVOR RAGGATT:
Thanks for the link Sue. Great article. Paul White's ALWAYS worth a read. Interesting throwaway comment somewhere towards the end...

"I've recorded and mixed more acoustic guitars than I care to remember, the most challenging of which was a memorable album, featuring Gordon Giltrap, Bert Jansch and Vikki Clayton, among others."

That must have been the "Mastercraftsman" CD tribute to Rob Armstrong and his guitars that Gordon helped put together a number of years ago (was that 16? 17? 18? years ago... YIKES!). Now that was a fantastic album. I'm going to have to dig out my copy and give it a spin when I get home from work!!

As you can guess I got the beastie today, one AKG perception 200 condenser mic from Dolphin as described. Got home tonight, unpacked it like a kid at Christmas, plugged it in to my new TASAM US 144 audio interface with Cubase software, re-read Sue's link on recording acoustic guitar and tried it out. Phew, no comparison to my last effort with the dynamic mic.

I tried it out with my Martin D28 and then mixed down solo effort with just a wee bit of reverb on the guitar sounds, phenomenal!

Hey I am now talking like an egg head anorak!! Who'd believe that 2 weeks ago I had an old tape recorder and old mic and never attempted to home record before. I am chuffed to bits, so again well done guys. I now feel I have a good and relatively cheap set-up for recording.

The TASCAM cost me 9 Merchant City Music, Glasgow. I had to haggle a wee bit as it sells at 140-160 but it always works if you throw a competitors price at them especially on their competitors 10% discount day, and ask them to check it out on their competitors website! Before you know it they are pricematching and discounting to get the edge. The Mic cost 85 at Dolphin music   6 postage by Citylink.

I am just learning all this recording stuff, software package etc so I am away back to play with my toys and try not to wake my kids up. Further tips on this stuff would be appreciated!!
John (apprentice anorak) Kelly

MIKE STRANKS:
Just dropping in a bit late on this one. Picking up on the comments on AKG Perception. The reviews I've read indicate that in quality these are slightly above the plethora of bargain-priced Chinese condenser mics now available. Just a tip: the Perception 100 is reckoned to be even better value, but without some of the extras its bigger brother has. Best price I can find is at GAK.co.uk.

As a semi-professional engineer, I'd agree with much else that's been written here. The key thing is to spend the time experimenting and listening to the sound you've recorded. A quick tip: if you get close and point it straight at the sound hole you'll probably not like the sound. Come out about a foot or two - if the room allows - and position it slightly up the neck and angled down the guitar, but not pointed directly at the 'hole'! But if it sounds right to you then it is right!