This guitar is a bit special. I know that it was mentioned in December 2010 News and a photo taken for the news page but I thought it worthy to speak at length about it and this guitar's important GG history.

Roger Bucknall made this as a gift for me way back in 1975. I had been waving the flag for Fylde Guitars big time. I had turned a lot of famous players on to the mans skill and sold quite a few to my pupils.

A few facts surrounding that time in my life.

I wrote the main riff for The Light of the World from The Brotherhood Suite on that very guitar in Roger’s flat.

I can still remember the very first gig where I used the guitar live and I think it was Sheffield University.

I was still singing at that time and writing those dreadful songs!

In the mid seventies I signed the deal with the production company Triumvirate and we started work on my second album with them, Perilous Journey. This was the guitar that was used for much of the recording. All those with copies of the original vinyl will remember me being photographed with that very guitar. You can still see me on YouTube on Top of the Pops with it!


I have lost count as to how many recordings featured the Fylde. I recorded my classic Heartsong on this guitar. My Solo album featured the stunning artwork by Sue Martin which I have hanging in my music room. This image also made it on to my Special Collection book. 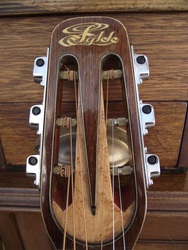 One abiding and very special memory I have is of loaning it to Sir Cliff for one of his London Palladium shows. I remember it like it was yesterday. He had a stunning looking girl walk on with the guitar, and before she handed it to him he said “be careful with that guitar, it belongs to Gordon Giltrap”

I know what you're thinking...what a sad old geezer I am, but, remember, Cliff and The Shads were my heroes as a kid, so to have Cliff playing one of my guitars on stage at one of the worlds premier venues, and giving me, this kid from Deptford a name check was the stuff of dreams! 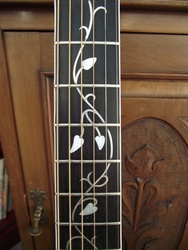 Fast forward to 1996 and I’m interviewing Cliff for Guitarist Magazine. I took that Fylde along as a nice memory for him of those times, and also for the photo session conducted by my late friend and manager Mark Hadley. When I took the guitar out of the case, Cliff’s eyes lit up! He said that one day he was going to get someone to make him a guitar just like it. Whilst he was outside for the photo session, I said to Hilary that it would be nice to gift it to him. I wasn’t playing it as much then, having the luxury of other guitars to use. When I presented it to him, he of course said that there was no way he could accept such a stunning gift! Anyway, he did relent and has had it ever since. 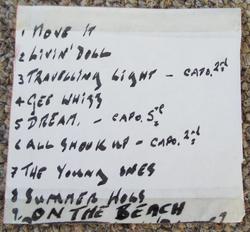 Sir Cliff has kindly loaned it to me for a short while for a possible project, and I have to say it is lovely to have it back in the house again. In the case was Cliff’s guitar strap along with several set lists written in his own hand featuring all of his major and iconic hits.

Since Sir Cliff has had the guitar he has had a new pickup system fitted, an LR BAGS DUETT system. I have the very same system on my Fylde Classical. It’s a great system and works well: VERY loud! 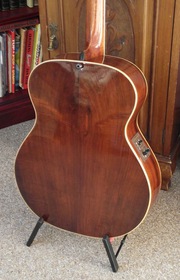 The action is still as wonderful as I remember it. This guitar is a deluxe instrument and is proof of Roger Bucknall’s skill way back then as a fine craftsman indeed. We called the guitar the Fylde Tree of Life guitar because of the stunning silver and pearl inlay on the fingerboard. The back and sides are of the best Brazilian Rosewood. This guitar today would cost at least £7000. It being the property of Sir Cliff of course makes the premium unbelievably higher. I could not guess at its current value.

I have included various photographs for your visual enjoyment.

I would like to thank his nibs for generously loaning me this lovely old friend.