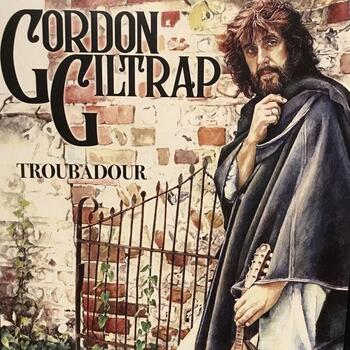 This long awaited release is now out there to purchase at £25 plus p and p. You will all know by now how special this album is to me and always has been and has been, created in this magnificent vinyl format in dedication to the memory of the late great Del Newman. The package comes with the all acoustic full version on CD along with a postcard for me to sign personal messages to each person that buys it.

At least 50 were sold on the day and orders are coming in each day, so my guess is that every copy of the 99 that were pressed will have gone by the time you read this, but my guess is that if demand was great enough a re-pressing could be on the cards but minus the acoustic CD version and post card.

This is just a small gesture in the grand scheme of things in keeping the memory alive of Del, and I feel in my heart that the great man deserved more, bearing in mind all the “ legends” he worked with, but God willing maybe a proper memorial concert could be arranged once Covid has been controlled somewhat. We shall see eh my friends.

Copies of the album have been sent to key figures connected with the album, like our dear pal Sue Martin who created the stunning artwork, Delphi Newman, Del’s daughter, Paul Ward who mastered the recording for vinyl, Gav Morrow for his design work, and one to a certain Mr Townshend who made a point of listening to the album on Christmas Day, sat by his open fire and declaring it “good work” and saying how “elegant” my playing was on the recording.

If by any chance there are copies still available then do visit the PSYCHOTRON website www.psychotronrecords.co.uk

I could put in the direct link to the album but it’s just as easy to explore the site which is great fun anyway. Once again a huge Thankyou to the Bonners for doing this special thing. They tell me it sounds divine on vinyl, so when one is allowed to go into other folk’s homes, I very much look forward to hearing it on Pete’s super high end audio equipment and experience for myself the full glory of Del’s sublime orchestration.

If you fancy visiting their Facebook page you can view again the vinyl launch which I highly recommend.

It is so lovely and at times amusing when Linda got the date wrong for Sue’s artwork and also the family dog barking at one point. It is so refreshingly real, I loved it!

What a great loss this man is, and our hearts go out to the Queen in her time of sorrow. 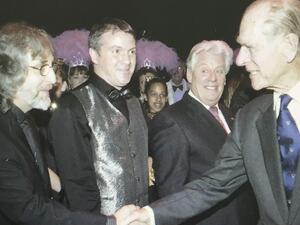 I had the pleasure of shaking his hand after a Water Rats concert at the Theatre Royal Windsor obviously many years ago.

The chat went something along these lines:

Prince Philip...”Of course technology has helped people like you hasn’t it”...

Me as he’s walking further up the queue “Yes sir in fact it’s liberated me”...

Prince Philip...”Yes you look as though you have been liberated”

When I received my MBE from Prince Charles in 2019 I told him I had played for his father, and he was very interested to hear this and asked why I wasn’t wearing my Water Rat badge, I said that I was told that any other badges weren’t allowed to be displayed, he said that I should have, and he had one somewhere at home in a drawer!

What an honour to meet two members of the royal family.

I have recently acquired a new instrument on loan from JHS. This is the new Paul Brett designed Raven guitar. I’m sure you will agree it is a stunningly interesting looking beast, and like all the signature models from the company, mine along with the Paul Brett series represent ASTONISHING value for money.

This little gem retails for just under £300 and has a unique tone that I very much like, and lends itself well to pieces like 'The Lords Seat' perfectly. The 12 fret to the body instrument comes equipped with a cracking pick up system, well geared tuners and a very useful pre amp which includes three band eq and a built in tuner. Sadly no case but hey what do you expect for an instrument at this price point! Many will remember how lovely the Paul Brett Viator sounded on 'The Anna Fantasia' on 'The Last of England' album! 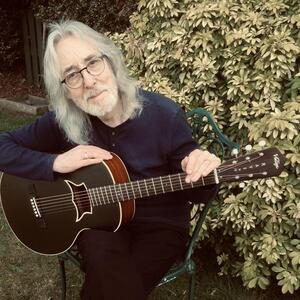 Anyway after spending time with it, I suggested to the company that Paul Brett and I record a 12 track CD to show what this thing can do. Paul Smith our main man at JHS loved the idea and the tracks have been done and dusted! The plan is to re-launch the guitar with the accompanying CD plus maybe, just maybe a gig bag to protect this lovely instrument. Anyway watch this space for more information as it comes through.

I have included within this month’s page a Facebook posting expressing my thoughts on the instruments I use on stage and in the studio and the reasons why, mention being made of JHS and the quality product they produce at such affordable prices. 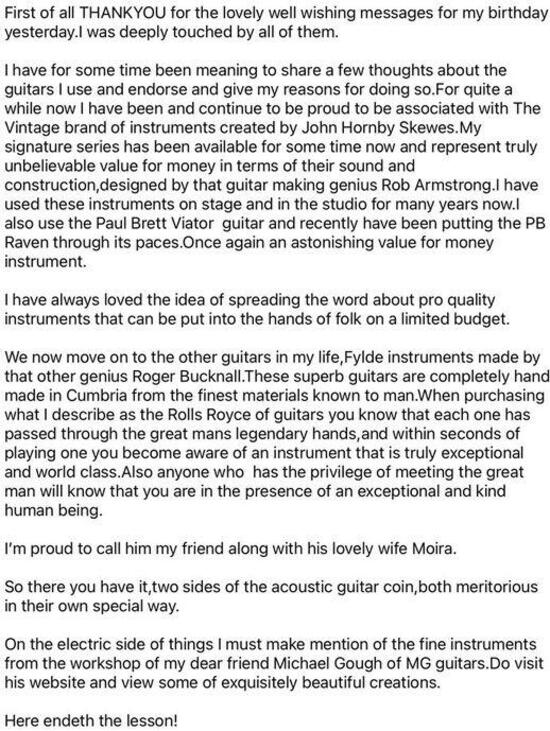 I received an email recently from my publisher informing me that a company in Japan want to rerelease three of my classic albums, Visionary, Perilous Journey and Fear of the Dark. The company own those three albums. Japan were also interested in adding The Peacock Party to the list. As I own that album they asked if I would be interested. The answer of course was YES! 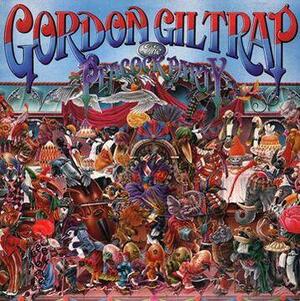 Many of you will well remember this classic 1981 release with the late great Alan Aldridge artwork, also that cracking tour with my then band of Rod Edwards on keyboards, Bimbo Alcock on flute and soprano sax and the legendary (ex Jethro Tull drummer) Clive Bunker. We decided that a bass player wasn’t needed because Rod superbly held down bass end duties on his Yamaha electric grand piano.

Going back in time I remember much of the recording sessions, and in the main it was placed in the capable hands of Rod Edwards to produce the sessions. Final production was done by the late Jon Miller.

This album is also very special to Hilary and I as it was this album that sort of brought us together! I was booked to play a gig at the Birmingham Guitar club at The Waterworks Edgbaston just off the Hagley Road, sadly no longer there. Anyway Hilary was there that night with friends. She knew the club organisers Tim and Sandra Robinson and was consequently roped in to sell raffle tickets, the first prize being a signed Peacock Party. Guess who won the raffle? You guessed it Hilary! A few months later there she was again at the same club. Ric Sanders (who of course played on PP) and I had dropped in to lend moral support to a local artist. I thought to myself “there’s that stunning woman again who won the raffle.” The rest is history as they say. The universe certainly shined down on me that night!

I have recently been in touch with my dear old friend Rod who contributed some lovely arrangements to one of my new pieces for the next Giltrap/Ward project. As a gesture of friendship in celebration of all the work with did together over the years under the banner of Triumvirate, I decided it would be nice to share ownership of this album with him. Two of the bonus tracks Rod co-wrote with Shirley Roden, she who contributed that soaring high vocal on 'Innerdream' from the Fear of the Dark album!

Anyway, new artwork will be created by the label but obviously retaining that fabulous cover illustration. I’m sure many of you will remember Alan Aldridge’s stunning artwork for Elton John’s Captain Fantastic album. They will also be using the same bonus tracks that were on the last rerelease of PP on Cherry Red / Esoteric of about 8 years ago.

One never knows, Rod and I may be “Big in Japan” in our old age, but we aren’t holding our breath!

A huge thank you to Paul Ward for his remastering skills of this lovely old chestnut!

As mentioned in last month’s news, Double Vision recorded so long ago but seems like yesterday is now available on line to download. I have such fond memories of making this album with maestro Raymond Burley. Recorded in a lovely church in Hertfordshire with engineer John Taylor who has recorded more classical musicians than you can shake a stick at.

Working with such a highly respected classical guitarist and teacher/author such as Ray was, and continues to be an honour. What Raymond did was to give me a massive degree of credibility and acceptance in the classical world! 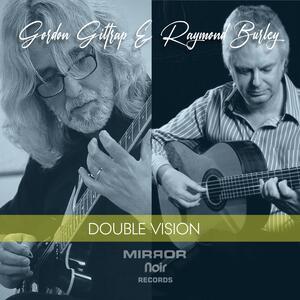 Ray is one of those rare breed of classical players who has an open mind to all kinds of music. He has never been bogged down by the dogma of the classical world where there has been so much snobbery in the past about the correct way to do things. He embraced what I did 100% and overlooked my illiteracy when it came to music theory and technique, particularly my home made right hand pick and little finger approach. He just loved my creativity and what he described as a “fresh approach to composition.” I asked him once if it would help if I learned to read the dots, his answer was “no it would change things and just get in the way.” He then went on to say that some of what I composed shouldn’t really work but it somehow did because I was unwittingly breaking all the rules!

This quiet maestro in many ways changed my life way back then. When he decided to record an entire album of my tunes in his own inimitable style I was truly delighted. The Long Road Home is such a fine piece of work.

Above and beyond the music making is our ongoing friendship with Ray and Sian as a couple. Sian is an angel of a person and Hilary and I have so many fond memories of our time together as a foursome.

Double Vision is out now. Here’s the link. Enjoy.

This very nice man Ian Healey very kindly made this beautiful ebony inlaid plectrum as a gift for encouraging him in a forthcoming LCM guitar exam playing one of my pieces ‘This Fathers Love’ his chosen exam piece. He got full marks and a diploma!

Below are a selection of the things he is currently making, and here is the plectrum he made me, now in pride of place in our display cabinet. His contact details are in with this nice email he sent.

Lovely things for all you guitar nuts! 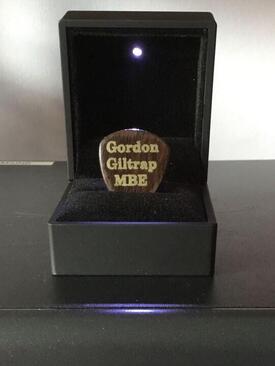 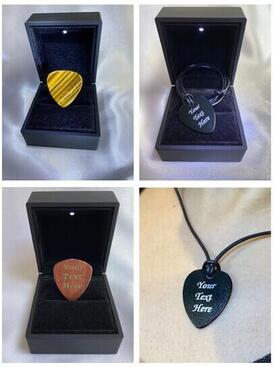 I am truly humbled by the fact that Gordon liked the item I made him so much; that’s given me a much needed boost.

My website (www.guitarchive.co.uk) and Facebook page aren’t quite ready as I am still setting these up. However, these will be coming on stream by the middle of May. In the meantime they can be purchased via the links below.

The wooden picks are in ebony or rosewood and can be etched or inlaid (like Gordon’s). The metal necklace/ bracelet has real or vegan friendly faux leather chord and can be personalised too. The tiger’s eye ones are as they are, though.

All come complete in a lit gift box. I have priced them reasonably, with the most expensive being the tiger’s eye plectrums at £19.99 (which look beautiful in real life).

People can contact me directly at ianhealey@me.com for more details and discounts. I can deliver in 1-2 business days.