All charities are worthwhile and when I can I like to do my bit. My involvement as MC for this charity which in fact covers four worthwhile causes came about through a phone conversation with my dear friend Judy Dunlop. Judy is a very fine vocalist and was at one time in a duo with my friend Steve Marsh. It was Steve’s publishing company Lathkill Music that produced a couple of my books. Anyway more about Judy. Her one time partner is the legendary Ashley Hutchings who co-founded Fairport Convention back in the day with Richard Thompson and Simon Nicol. Her union with Ashley produced that outstanding singer-songwriter Blair Dunlop.

Anyway Judy asked me if I would like to be involved and involved I am. I have already done the voiceover for the ‘walkthrough’ for the website, and when things start to open up we hope to do some chat to camera for video. Please follow the links and join in if you can.

HEARTS IN HARMONY: Derbyshire musicians unite WITH A CONCERT to support FOUR CAUSES

Tickets went on sale on Valentine's Day for an online concert, raising money for four different organisations – all working together to share the love, and the music!

The concert will be streamed from 6th July – which is International Kissing Day ! – and will feature nearly three hours of musical entertainment from five different acts.

The idea for the concert came from Rare Occasion (Judy Dunlop, Nigel Corbett, Jon Scaife), having wanted to do something to support the organisations who positively affect the lives of loved ones. It soon expanded to include musical friends Offshoots, Some Antics, New Horizons, Blair Dunlop and Ashley Hutchings – all instantly agreeing to be part of the event to help others. The music will be folk, with elements of jazz and more – all played by wonderfully talented musical performers.

The MC for the concert will be guitar maestro Gordon Giltrap MBE, who has this message: “I hope with
all my heart that funds raised will help to relieve some of the suffering. Please be as generous you can…”

Being online, the event will have a global audience, and profits from the concert will be shared equally between four causes. Blood Cancer UK are dedicated to beating blood cancer by funding research and supporting those affected. Hft provide services for people with learning disabilities to support them to live the best life possible. Meningitis Now are the founders of the meningitis movement and the only charity dedicated to fighting meningitis in the UK. ThisIsLuke is a Crowdfunder instigated to help young Luke Mortimer and his family with ongoing costs relating to Luke's quad amputation due to meningococcal meningitis.

Julia Kinch, Divisional Fundraising Manager for Hft sums up the response from the four causes: “We're thrilled to have been selected as one of the charities supported by the Hearts in Harmony concert. We're already looking forward to tuning in, and can't wait to see all of the fantastic acts that are lined up.”

You can buy tickets from b.link/heartsinharmony from Sun 14 February 2021

As I mentioned last month, this long period of lockdown has allowed me to compose more and my dream musical partner Paul Ward and I have been working away in our respective music spaces. Mine is a room and his is a state of the art studio with banks and banks of keyboards of all shapes and sizes. Working remotely hasn’t cramped our style at all miraculously, in fact I truly believe there is some psychic connection between us because one always seems to know what the other is thinking about on any current track we work on and it truly works like a well-oiled machine as is evidenced by the work we have done together before and since The Last of England!

Last month I got a call from my old pal Oliver Wakeman asking if I fancied adding some guitar to a track he was working on called The Wedding. What he had in mind was some nylon strung guitar on the track. I hadn’t used one for yonks so I sort of rose to the challenge and created a part which I’m pleased to say he was chuffed with. So much so that he thinks he could create a completely new piece that could well act as a bonus track when we re-release Ravens and Lullabies later this year. 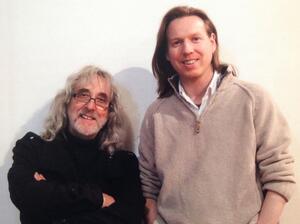 Oliver is the total perfectionist and he truly knows what he wants, so it’s always a challenge raising the bar to meet his expectations. The great man has been so kind to me in the past contributing his superb piano and strings to 'You Make Me Believe' the QE choir track released in December last year (where has that time gone to eh?) so I will always be eternally grateful to him. I still regard him as one of the finest keyboard players around and that includes his dear old Dad of course.

Oliver Wakeman reunites with Clive Nolan after 20 years to issue a 3CD Box Set - Tales By Gaslight featuring remastered versions of their ‘future prog classics’ Jabberwocky and The Hound Of The Baskervilles along with a new disc Dark Fables.

The Tales By Gaslight box set, comprising 3CDs each with a 16-page booklet and 3 individual Art prints of the three covers, will be released by Burning Shed on 23rd April.

Jabberwocky, released in 1999, was based on the famous Lewis Carroll poem. It was followed by The Hound of The Baskervilles (2002), inspired by the Sherlock Holmes novel penned by Sir Arthur Conan Doyle. The project was always intended to be a trilogy of musical interpretations of literary classics, but an album inspired by Mary Shelley’s Frankenstein was shelved because of a lack of record company funding.

This box set package also includes a third disc, featuring previously unreleased pieces that were intended to complete the trilogy. This third disc, Dark Fables, contains over 30 minutes of music conceived for the abandoned Frankenstein album.

Nolan and Wakeman also found pieces which were unused from The Hound of The Baskervilles. These include The Man Called Sherlock which was the original version of the Overture and 221B, inspired by Sherlock Holmes’ famous address.

Unusually for the time, the first two albums featured a host of guest performances, including narration by Wakeman’s father Rick and actor Robert Powell. Former YES guitarist, the late Peter Banks, Magnum vocalist Bob Catley and singer Tracy Hitchings appeared on both albums. Ayreon mastermind Arjen Lucassen lent his talent to The Hound of the Baskervilles along with members from the bands IQ and Threshold. The unique artwork was created by Rodney Matthews for the original Jabberwocky release. Peter Pracownik was the creativity behind The Hound of The Baskervilles artwork 20 years ago and has returned to this trilogy by lending his talents to the new Dark Fables artwork.

In keeping with the spirit of the two previous albums, the new recordings feature the talents of, amongst others, Gordon Giltrap, Paul Manzi (Arena, Oliver Wakeman Band, Sweet) Andy Sears (Twelfth Night) and David Mark Pearce (Oliver Wakeman Band). Also included is an original reading of the Jabberwocky poem by Rick Wakeman.

The Tales By Gaslight box set contains 3 CDs each with 16-page booklets including lyrics, previously unseen art work and many stories behind the creativity from both Wakeman and Nolan. The first 250 box sets will also include a 4th limited edition numbered art print of the box set cover signed by Clive Nolan and Oliver Wakeman.

Tales By Gaslight is available to pre-order now from Burning Shed with the official release on the 23rd April.

Working on these various projects is good for me and truly helps to keep my hand in. My pal Nigel Bates is a good amateur songwriter and he’s always coming up with songs that require some GG on them, and it’s getting to the stage now where I have played on so many of his songs we may well have enough for an album! Watch this space. As I write this I’m currently working on a second guitar part for one of my students. Many of you will remember that this is a service I’m offering to anyone who would like some GG on their track. Just contact our Sue via the Contact Us form for more info. 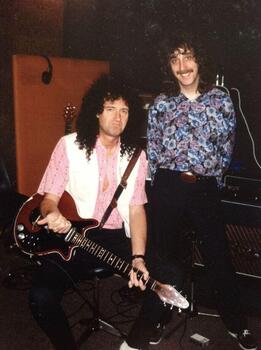 Nearly two years ago this month I composed a piece for my lovely grandson Braden (God I miss seeing him) but it never really flowed as well as I had hoped so I decided to rewrite it keeping all the parts that I liked and writing new ones. The new one is far superior to the original although a tad shorter.

Whilst listening to the track I could hear another instrument playing a counter line. My instrument of choice was a lovely little instrument featured on these pages in past given to me by Brian May. It’s a lovely instrument a sort of cross between a mandolin and a twelve string. It has a very sweet tone and worked well on the middle section of the piece.

Archive pic of Brian and I - Look at that shirt! 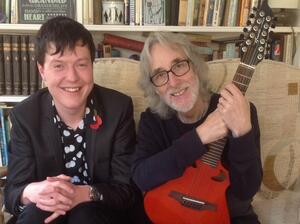 Here is a photo of it with my pal Adam Parrish who incidentally is doing a wonderful job of scoring all the orchestral parts for the 'Eye of the Wind Rhapsody' in a digital downloadable format. A real labour of love and I can’t thank him enough. Will let you know when it’s completed and what plans we have for it! Thanks Adam.

I also agonised over an electric solo on a new piece. I finally nailed it using that lovely custom built Strat style guitar that Paul White made me. I felt like I was channelling Mark Knopfler (in my dreams) on the track. Anyway it worked perfectly thanks to Paul Ward’s expert engineering skills. BTW Mr May says to send him the track with the aforementioned instrument for his interest once completed. A pleasure sir!

My Zoom lessons are going really well and the diary is slowly filling up. Please don’t hesitate to follow the link to Paul Roberts for more info on how to join me face to face for a GG one to one lesson for a duration of your choice.

The Zoom thing is really good and I had a pleasant hour chatting face to face with a major musical influence on my life a few weeks back. This is definitely the way the world is going right now and we have to embrace it like it or not.

By the way Hilary and I have had the first of our jabs with no side effects whatsoever I’m pleased to report and hope that all our readers are getting theirs OK. It signifies a small light at the end of the tunnel.

I had a lovely phone chat with a chap who is writing a book about the Glastonbury Festival where I played with the band on the Pyramid stage in 1981. I had great memories of the evening and it truly was a magical experience. That stage certainly had great vibes to it, and the place does have a magical energy to it!

The band that night consisted of Clive Bunker on drums (ex Jethro Tull) Chas Cronk of Strawbs on bass, Eddie Spence keyboards, Rod Edwards piano, Bimbo Acock flute and sax. I remember I was playing a lot more electric then and my guitar of choice was a 1976 white Fender Strat played through a lovely old Fender showman amp. A beautiful and sweet combination. 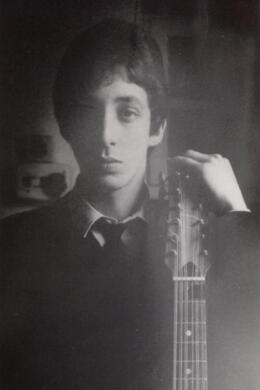 Mod age 17 - I sent this to Pete Townshend who said we could be sisters! 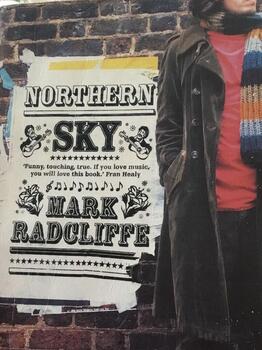 I remember reading this book yonks ago a great read, but imagine my surprise when I read on page 19 as follows.