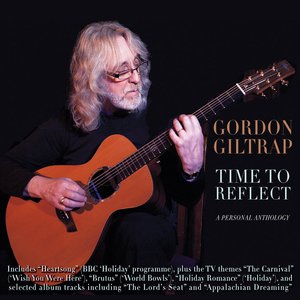 Release of Time To Reflect

On the 9th of this month my brand new 4 CD box set for Trapeze records will be available from Amazon. I made mention of it last month but let me refresh your memories.

The collection is entitled Time To Reflect: A Personal Anthology and comprises of the following albums, Elegy, Under This Blue Sky, Drifter, Music For The Small Screen.

First of all let's talk about Elegy. When it was first released on CD there were two serious glitches on the title track and also on Sallies' Song. My good friend Paul Ward corrected both these issues very quickly so I was able to present the record company with technically perfect tracks.


Because the album is quite short being mastered from the original vinyl I decided to add five tracks from my Janschology album which fitted perfectly with the original vibe of the album rounding things off very nicely.

Moving on to Drifter and Under This Blue Sky. Both albums are pretty much as they were on their initial release with just one or two slight edits and additions.

Music For The Small Screen has the addition of the original version of Heartsong from the Perilous Journey album along with of course the " all-star" version from 1993. I have written brand new and informative sleeve notes for all four albums and included some cracking "never before seen" archive pictures relating to each album some of which I'm enclosing this month.

Photos: With Brian May. Rick Wakeman 1993 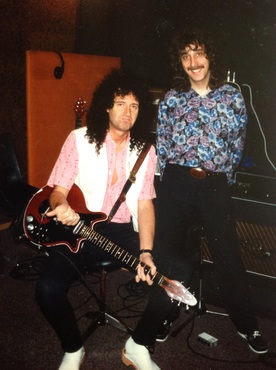 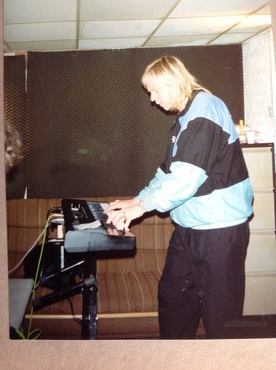 With Steve Howe and Midge Ure and (below) Neil Murray 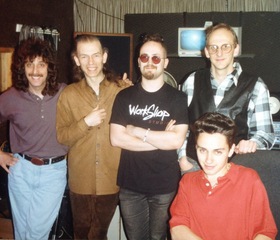 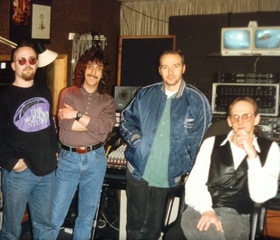 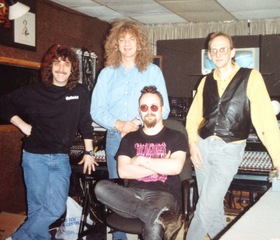 With the passage of time of course we all age and it's quite sad to see fresh faced younger versions of ourselves but that's life, and hey I'm just SO grateful to be here to share these memories with loved ones, friends and followers of my music.

The front cover image which really "does what it says on the tin" was taken at a gig I did for our dear pal Sue Martin at the Chichester Inn a couple of years back.

I'm delighted that Trapeze want to get this back catalogue out on the market as it represents good value for money, retailing at about £15. Don't quote me yet though, but it's around that price!

The label have also promised a spring release of my beloved Troubadour album. If things go well I hope to release more archive material with this dynamic little label.

I have decided after all these years to host a guitar weekend in the glorious and historic spa town of Buxton. My good friend Woody Mann has been urging me to do this for many years now and it will in its way be an historic landmark in my career. It will be held over the weekend of 11/12/13th of September. I shall be teaching a maximum of 12 students and the weekend is open to players of all levels. If you want to learn about all things GILTRAP this is for you. Update 9/2 All places now SOLD OUT

If you would like to register your interest for possible future dates please email Sue Holton at ggiltrap+guitarworkshop@gmail.com and she will make sure you get sent all the info as soon as possible.

I want to share with you the passing of one of the musical instrument industries best loved sons. His name was Keith Dudley, and it was only November when he attended my fund raising concert for St Giles Hospice in Sutton Coldfield.

Keith was a huge admirer of my music and A Christmas Carol in particular was a firm favourite of his which he played note perfect on his Lowden guitar. Keith helped to establish Black Star amplifiers here in the UK, and prior to that worked for many years for Marshall Amps.

It was only a few days ago that we were exchanging e- mails. He was at the time of his passing a patient in Papworth Hospital awaiting a full lung transplant and saying how he was listening to my Troubadour album and focusing on getting well again. Sadly this was not to be!

I remember dedicating A Christmas Carol to him on that November night and I can't remember a time when I have played it better. Even I was moved by the sound of the piece which was obviously emotionally charged because I was playing it specifically for him. The piece just took wings and soared.

He was a lovely human being and will be greatly missed by all who knew him. He would have been 47 at the end of January. 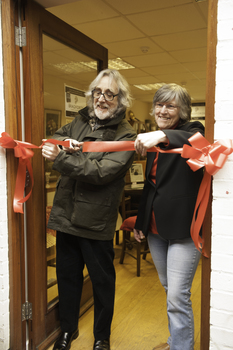 As you know it has been my privilege to be a patron for nearly 21 years of the Tracy Sollis Leukaemia Trust, and as patron I was asked to attend the official shop opening in Evesham on Monday January 12th. It’s a cracking new shop next door to her existing one but has more space for furniture and suchlike. The local press were there to witness Sue Sollis and I cut the ribbon. 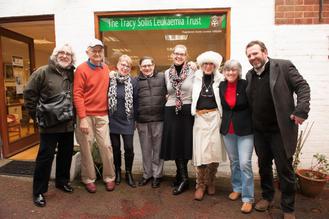 It was a good day and it does the heart good to see so many people give of themselves to charitable causes. Sue has so many friends helping out, and the opening was accompanied by tea, coffee, mince pies and homemade cupcakes.. yum yum.

We wish Sue great success with this lovely new shop. I shall be doing my annual concert at The Fleece in Bretforton in May.

As I write this I have performed two concerts and both memorable and lovely in their own way. The first was at the wonderful Unicorn Theatre Abingdon, on January the 15th. This theatre is very old at least 500 years (well the building is) but not always used as a theatre in its long history. 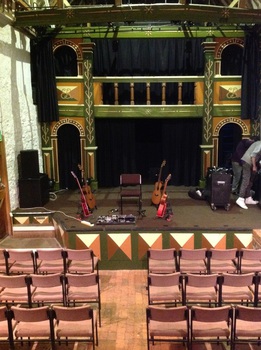 Geoff the organiser took over the role of booking live music into this VERY special venue and has a passion for the place which is infectious, so much so that I instantly fell in love with it and offered to become a patron and help in any way I can to keep this venue going.

You can see by the photograph how magical the place is.

Getting back to the concert. Being my first gig of the year I was pretty nervous. Having had a few weeks off over the Christmas break I always worry that I can still do what I do, I guess it's my inbuilt insecurity that never really leaves me and hopefully drives me on to do good work and maintain a certain standard. The good thing is that I played as well, if not better than I have done for some time, and the audience were just great from the word go.

I sincerely look forward to performing on the stage of the Unicorn in the future.

The second gig of this year was at one of my favourite venues, the Countess of Huntingdon Hall in beautiful Worcester. For some reason on the evening the venue's boiler had gone on the blink and the hall was really really cold, which to a degree effects my playing. Being a chilly mortal I have to be warm to able to play the instrument properly. In spite of this I survived but it wasn't perfect. It isn't often that I play to an audience of folk wearing overcoats and gloves and scarves. The lovely Carol Sampson kindly joined me for two numbers in the second half and sang beautifully "Under this Blue Sky" and " Anyone can Fly" from the Ravens and Lullabies album " My thanks go to a Carol for joining me at such short notice.

Once again a lovely and receptive audience. 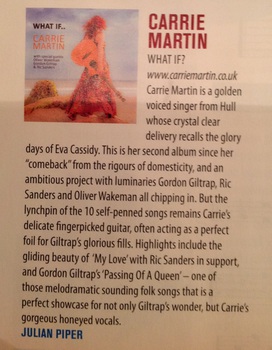 On the morning of January 16th Ken Bruce played HEARTSONG and gave me a nice name check. Within minutes of it being played I received numerous texts from friends reporting in that it had been played and saying how nice it was to hear me on national radio. It’s good to have friends to share in news like this.

There is a cracking review of Carrie Martin's new album "What if" in this month's is due of ACOUSTIC magazine. Also in the same issue is the first of my two part interview with Garry Southwell the great classical guitar maker. Getting back to the review for Carrie. The interesting thing is that the reviewer thought it was me playing guitar on "The Passing Of A Queen" when in actual fact it was my good friend Gary Burnett!! Hopefully Gary will be pleased with this mistake.


Guitar Of The Month

It's not often that amazing bargains come my way, but on Saturday the 10th of January my friend Geoff Olner and I dropped into Sheffield's premier guitar store Rich Tone Music for a peek at what was on offer in their second hand section. Straightaway an instrument caught my eye and I asked one of the assistants to let me have a look at it. 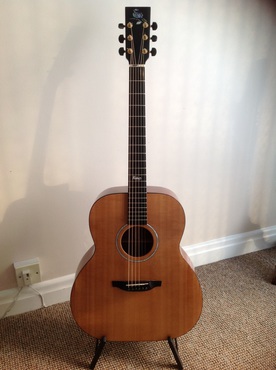 The guitar had an inlaid bird on the headstock and the name of Robin inlaid at the 12th fret. On closer inspection I could see that this was potentially a quality instrument built from solid woods. Mahogany for the back and sides, spruce for the front and ebony for the fingerboard and bridge with a nice pearl inlay circling the sound hole. I couldn’t resist it and bought it for a silly price.

Since getting it home I have spent quite a few hours on it, removing the under saddle budget pickup which was inhibiting the true sound of the guitar. The machine heads had been put on wonky so I sorted that and tweaked the "hidden" truss rod which required almost micro surgery to adjust but I managed it.

As you can see from the photograph it is quite a handsome looking beast and I'm delighted to report that it is beginning to sound lovely. I plan to spend a bit of cash on it because it's worth it.

A couple of days after purchasing it I got an e- mail from the shop who had been in touch with the previous owner who shone some light on the instrument and this is what he told me. The guitar was made by a Mr Robin ARMSTRONG. How bizarre and amazing is this, a guitar made by another
R Armstrong!!

Apparently Robin started to make guitars as therapy after a serious accident, more than that I don't know. All I know is that I was lucky on that Saturday to find such a potentially great sounding guitar.

Later this month (January) I'm making a very special trip down to London to have a meeting with Karen Kidson the sister of the late Loren Jansch to discuss my role as a patron of the BJ Foundation. I feel very honoured to be a patron and hope I can do anything within my power to further the cause of keeping alive the music and the memory of both Bert and Loren. Also the family are kindly loaning me a special guitar to record "Loren" for a new album. More on this meeting in next month’s NEWS.