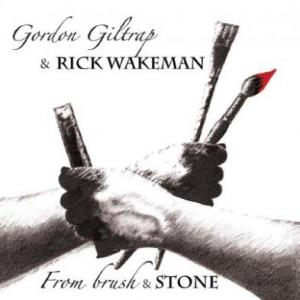 My my, the year is swiftly disappearing, it will soon be Christmas!

So there we were looking forward to your reaction to From Brush & Stone only to find out that Rick and I hadn't fully checked the artwork before it went to print. Our dear old friend Rick Payman pointed it out on the Forum. Horror of horrors, there it was in black and white, the WRONG running order for the tracks!

On the album it is Rick's tracks that one hears first followed by The Brotherhood Suite and the last two remaining GG pieces. On the sleeve it is the other way round! How we missed this I don't know? My only excuse is that one just doesn't expect to see such a glaring error. It really was all down to Rick and I to check out the fine print (and not so fine print) before handing the whole thing over for manufacture. At least it was both of us!

The beauty of working with a small label is that in the main the artist has complete artistic freedom over the material recorded, sleeve design, etc, etc. and to that end it really is the artist (or artists in this case) who have the last word, so the blame firmly rests with Rick and I.

Anyway after much apologising from this end and a couple of sleepless nights the whole thing has now been sorted, and a big THANKYOU to Jan Leytham-Gain for pulling all the stops out to redesign the offending page and a big THANKYOU to Rob Ayling for his patience. We hope that Jan and Victoria (Rob's wife) liked the bouquets of flowers that were sent! On the plus side of course is the fact that these first releases will become collectors items in the future!

Once the new batch has been sorted and handed over to the PR company for reviews and hoped for radio and TV exposure, we hope for a response from the media and pray that it is favourable. For my part I truly believe that this album is perfect for Classic FM as well as other shows. We shall wait with bated breath!

I recently went into Paul White's studio in Malvern to record some more pieces for the proposed new GG album due for release later this year. This is the first time in years that I have actually recorded somewhere else outside of my own humble home recording set-up. I'm delighted to report that the three pieces recorded, Tears of Joy, Rachel's Reflections, and Five Dollar Guitar turned out great

Paul captured my performances perfectly and the sound has an edge and a sparkle to them. I'm thinking that maybe for future solo pieces I shall do a similar thing. It's just great having the luxury of one of the UK's finest sound men twiddle the knobs for you (excuse the term). I plan to record a couple more pieces at Paul's within the next few weeks, Ive's Horizon (the 2009 version) on my wonderful FYLDE 12 string, and possibly my new loop station piece Roseberry Topping. I do have early recordings (two years plus) of the aforementioned pieces, but felt that I had moved on with the way I play them thus validating new recorded versions.

I used my FYLDE cedar top custom for Tears of Joy, a YAMAHA LA 8 guitar for Rachel's Reflections (I know what your thinking BUT the Yamaha has a great sound and suited the piece perfectly) and my 1980 ROB ARMSTRONG figure eight acoustic for Five Dollar Guitar. Incidentally, Rob Armstrong is making 10 limited edition Bert Jansch guitars, each one will be signed on the label by the great man himself along of course with Rob. I have put my name down for one as I need another guitar (like a hole in the head) to add to my collection. Anyone interested in ordering a unique guitar should give Rob a ring on 02476 442502.

I recently acquired a couple of nice guitars from a shop close to where we were staying with friends in Melksham. Marks Music is a cracking little shop and worth a visit. I purchased a nice old Fenix Telecaster fitted with Bare Knuckle pickups and a nice small bodied Faith parlour guitar. I also hope to be the proud owner of a Martin D 28 slot head 12 frets to the body acoustic soon, once I have sold a few more this end. I suffer from what is known amongst guitar circles as GAS, which stands for GUITAR ACQUISITION SYNDROME! The guitar is in PMT in Birmingham, a great shop and friendly staff!

That fine guitar maker Steven Toon is creating a guitar for me using the Variax electronics featured in my current Line 6 guitar. This guitar will look like a conventional acoustic but will have all those Variax sounds in it. I can't wait to see it, and more importantly  PLAY IT! John Etheridge is currently playing a Steve Toon gypsy jazz style guitar, and Steve's guitar was featured at our exhibition at the Hub. 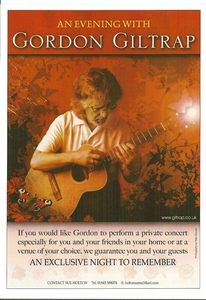 Hilary and I attended a lovely evening recently for a chap called Dave who is going to spend some time working in Australia. His partner Sharon organised the surprise GG concert in their home in Birmingham.

The area I had to work in was snug to say the least, but in typical GG fashion I feel I rose to the challenge and it really turned out extremely well, although when the surprise happened there was much shedding of tears - even Hilary and I were filling up! We wish Dave well in his temporary new life in Australia and hope he returns to these shores soon.

These last few weeks have seen some cracking shows in lovely venues and well organised. My thanks go to the folk at East Grinstead, Bath and all the village halls we have played so far. We look forward to more of the same throughout the coming year.

The Lord's Seat on TV.

I was delighted when our beloved webmaster/mistress Sue Holton told me that The Lord's Seat was used on a TV programme entitle Around the World in 80 Faiths. It is SO good to know that I have a presence in these areas. By the way, check out Ray Mytton on YouTube playing his stunning arrangement of the piece on Lute. For my money it ranks alongside the great Raymond Burley's version of this old chestnut of mine. In fact Ray M has used Ray's arrangement of the piece and has interpreted it perfectly. Well done Mr Mytton!

The new GG book with Lathkill is coming to completion. It will be called Vintage Giltrap and will contain many of my early pieces like Heartsong and Lucifer's cage. This will be the first of two volumes in the series. I shall keep you posted of developments. I have rewritten some of the parts to make life a little easier for the student. I have omitted some of the slaps and ornamentation's with the pieces leaving the player to just get on with it and play the pieces in THEIR own way. The cover design will be centred on a wine bottle with an early pic of yours truly on the label. Clever stuff eh!

Until the next time.