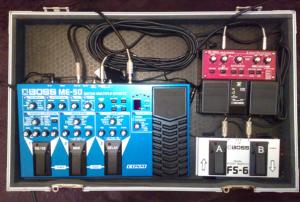 In March of 2006 I was invited to be Chief Adjudicator at St Augustine's Catholic College's Young Musician of the Year final. This is an annual competition in which the best musicians from the College compete for the coveted title. It is always a well-subscribed competition, where students have to proceed through heats, quarter-finals and semi-finals before the final successful few get the chance to perform on the night at the Wiltshire Music Centre. Four are then chosen to perform again in the Grand Final, after which the winner and runner-up are chosen.

This is a hard competition, well fought by very talented and driven students from every area of music. The previous year had been won by student guitarist Callum Merrett who was given guitar sessions by my good friend Bob Wilson - 'Uncle Bob' to most students.  Bob is the Print Manager at the College, and in his free time he gives some Students peripatetic guitar sessions. How good is that, eh! Callum played 'For the Love of God' by Steve Vai, a first for the competition as a guitarist had not won before or even got to the final.

The day after the competition I was asked to give a Workshop and Concert to 220 students of the College plus some students from two other schools. This was a great day which the students seemed to relish and I had a great time teaching, answering questions and then showing my pieces, all very fulfilling. The feedback from the College was fantastic with guitarists and non-guitarists enjoying the day and all of the questions were well thought-out and probing.

This year Bob informed me that Ewan Merrett (Callum's younger brother) is playing 'The Dodo's Dream' as his Young Musician piece. This is great for me as it means that the Workshop and Concert had a positive effect on the students, enough to get them listening to my music and maybe giving them new ideas on composition and style. The Dodo has had quite a profound effect on folk since I have been playing it.

I arranged with Bob for him to visit me with his guitar and pedalboard ( see pictures ) to programme up his FX, which are same as mine so that Ewan can replicate as near as possible the sounds I use.

Bob also videoed everything so there is as much info as possible for this young lad to give it his best shot.  We had a great day programming his effects to sound like mine and running through 'Dodo'. He went through everything with Ewan and the two of them are back up here on the 16th for a final instructional day, to make sure it all goes as well as it can. It would be great if he won!

Another of the Colleges students intends to do one of my pieces for AS level which is, indeed, flattering. One student also played 'Heartsong' last year and achieved a good pass.

I wish Ewan the best of luck with the competition.
I'll keep you informed with how he gets on,
Gordon

For those of you who would like to have a go at 'Dodo' yourselves, below are two tab files of the main riff of Dodo's Dream in PDF format.

You can also visit the Gordon Giltrap YouTube Channel to see the video of Gordon's techniques when playing 'Dodo' in close-up detail.