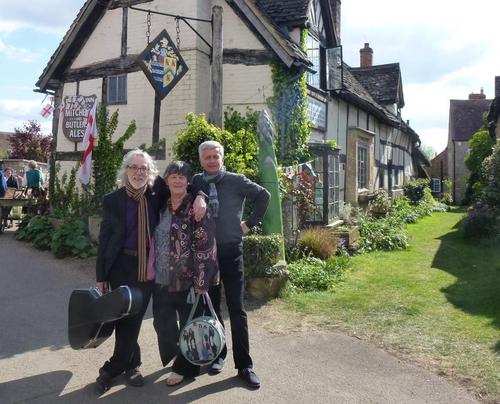 I have to say hand on heart that my April 23rd St George's Day appearance for The Tracy Sollis Leukaemia Trust ranks as a special day and indeed weekend for Hilary and I. It had been two years since I visited the beautiful Fleece in Bretforton, and it felt just like yesterday. What made it so special were many things, the main was myself being well enough to perform again after events of the last couple of years, and also to have Piotr and Ania attending from Poland was just beautiful. Added to that was having Sue and Mike Holton there as hosts for this very special Polish couple. Without Sue and Mike it would have made Piotr and Ania attending nigh on impossible, so a huge THANKYOU to them for their kindness and generosity in helping to make the trip happen in the first place. Picture above shows me, Sue and Piotr outside the Fleece - love the handbag!

It was Piotr who commissioned me to write Ania's Dream for his beloved three years ago and for it to be one of THE standout pieces with those stunning Paul Ward arrangements on The Last Of England album.

I had been practising like mad to play Ania's Dream in readiness for the concert knowing that this special couple would be there, but you know, you can spend hours preparing a piece and it can still go wrong on the night. I played it OK in the first half and again in the second and apart from one glitch it came over very well, and everyone including you know who were very moved by it.

The guitar I donated to the raffle made well over two hundred pounds, and this along with ticket sales, a mini auction with various pieces and some books from Hilary and I, raised well over a thousand pounds on the night. It was lovely to see so many old friends in the audience including Andrew and Anna Davies, John and Pauline Adams, Nicky Pearcy, Andy Smy, Sue and Bob Fairclough, and many more. 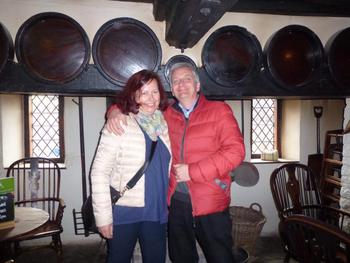 The weather was stunning, and the Asparagus Festival was a great success along with the men's and ladies Morris teams doing their thing, as well as having a camera crew from Country File filming much of the afternoon’s events. The following morning Sue, Mike, Piotr and Ania joined us for breakfast which rounded off a cracking and fun filled weekend.


Thanks to Nigel and everyone at The Fleece for providing the Barn, PA system, stunning accommodation and breakfast!

Here's to next year. 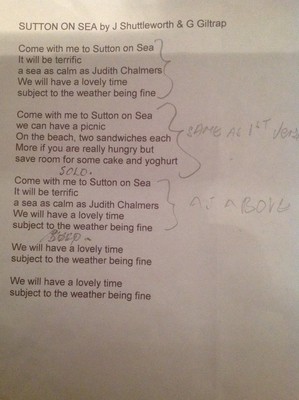 On the 30th of last month I was the guest of a Graham Fellows AKA John Shuttleworth and Jilted John. The venue was Sheffield City Hall and it was a complete sell out. Graham is a native of the city and this was the final date on his UK tour, under the title of "Last Will and Tasty Mint".

My spot in the first half was to accompany him on his "Sutton on Sea" song set to the music I wrote to Wish You Were Here, many years ago, The Carnival. After the first verse John forgot the second verse, then remembered it and through all this I had to catch up, which I did eventually!

The stage was then left to me to perform a couple of solo pieces, Maddie Goes West and Heartsong, both of which received rapturous applause! I was so overwhelmed by the response that I completely forgot to introduce the next act which was Graham Fellows in the guise of Jilted John. As I entered the wings G reminded me of this, so thinking on my feet I immediately returned to the stage to apologise for not having the time to do an encore and announced that the next act ruined my life. "Ladies and gentlemen Jilted John".

It had been a long time since I had played in front of two and a half thousand people and the experience was thrilling. I thank Graham most sincerely for having me as his special guest. 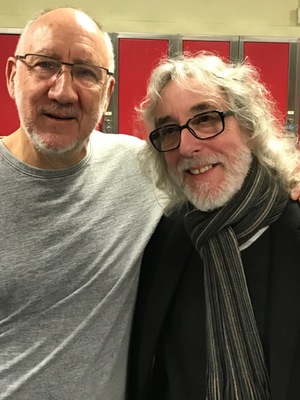 On April the 12th at The Barclaycard Arena and small dream came true for me, when my good friend Keith Robinson arranged tickets and back stage passes for the final concert on the Who's current UK tour Afterwards at the meet and greet I finally met the man who's guitar style and music changed my life. Mr Pete Townshend. It was a special moment of mutual admiration from this very gentle, gracious and generous man. My thanks go to Keith Robinson for arranging the passes not only for me but three of my friends Richard, Becky and Spencer.

My teaching weekend in Frodsham went well, and what made it special for me was the fact that four of the students brought their partners along which made it a truly all-encompassing sharing experience, with the girls enjoying each other's company and lending support to their other halves whilst they were working hard mastering some of my more challenging pieces.

On Sunday my special guest, the author, teacher and brilliant guitarist David Mead, added the icing on the cake with his stories of past interviews with famous players, his thoughts on memory training and playing his delightful compositions on a beautiful Fylde guitar. He also very kindly gave is all copies of the latest Guitarist/Acoustic magazine along with his latest superb CD.

The Castle Arts Centre is a delightful location and I hope to repeat the experience later on this year. My thanks go to the following lovely people for helping to make the whole weekend an enjoyable experience: Michael and Lesley; Chris and Annie; Tony and Wendy; Andrew and Becky; Roy and Liz; David and Carol; Karl; Mark; and finally to my beloved Hilary and Kim and the staff at the centre. Gav Coulson and JHS provided special gifts of T shirts, brollies and back packs to each attendee.

Here's to the next one.

Some lovely quotes from attendees below.

I found the weekend completely inspirational. The small numbers and such lovely characters made it feel like I was joining a family...

Since I got back I have been practicing the songs we studied and also beginning to play "variations" on them. The melodies, chord changes and tunings are sublime - I never thought I would be close to playing them

Don't tell Gordon too much of this in one go or he'll never get his head through the door but... I'm so glad that I got to spend a weekend with such a friendly and humble genius.

So a pretty good weekend! Book me in for the next one!

“Once again, Gordon’s guitar weekend surpassed all expectations. The tablature for each of the pieces to be studied arrived four weeks in advance, enabling students to gain some familiarity. Over the course of the two days Gordon ran through each piece section by section, with a particular focus on the challenging parts. As necessary, these were broken down and played at a slow speed so that you could see what the maestro was actually doing.

As always at a Gordon event, no-one got left behind, as he took time out to provide tailored one-on-one tuition and advice in line with the capabilities of the individual player.

In summary, the weekend was a wonderful combination of: insight; anecdote; advice; fun; guidance; hands-on help; and encouragement. Gordon naturally instils confidence in his pupils and I believe everyone left the weekend a better equipped and more capable guitarist than when they arrived.

I would have no hesitation in recommending the course to any guitar player wishing to improve their playing and understanding.” 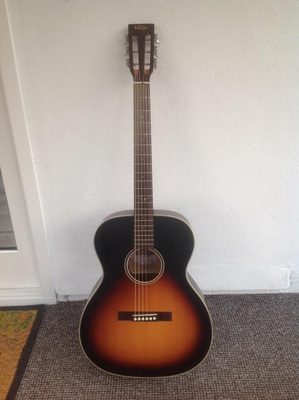 My guitar this month is this VINTAGE VE 440VB. Vintage have always produced instruments that represent great value for money. This instruments carries a retail price of just under £300. Constructed from solid timber with a built in pre- amp this guitar sounds really sweet. I spent quite a while setting it up and once amplified sounds really good. Whether this guitar makes it onto a stage with me is another thing but believe me it surely is good enough. I remember in the early days of guitar construction. If I had a guitar that sounded as good as this then I surely would have been over the moon, which raises the question of old versus new!

I firmly believe that guitars made these days with the technology and know-how around now are probably superior to ones available way back then, with of course the exception of vintage Martin and Gibson guitars and possibly Levin's and maybe early Zemaitis and John Bailey instruments. We are living in an age where good sounding instruments are there for all on a limited budget. 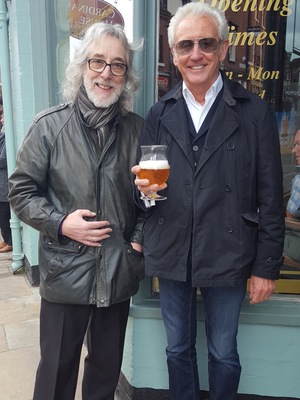 My lovely daughter Sadie came to visit in April, and whilst here we visited our favourite of all cities, Lichfield and whilst there we visited the Cathedral and the town, and it was there that we bumped into the legendary Tony Christie, a lovely man and of course outstanding singer. He kindly allowed us to take this photograph. At some point we hope to share a coffee with him when time allows. I hope you enjoy these cracking photographs. 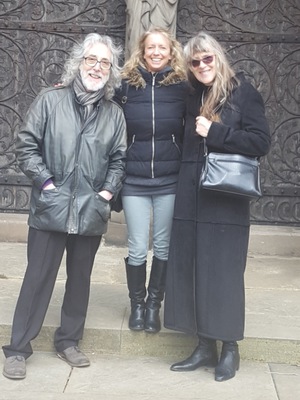 We also had Carrie Martin staying with us and it was a joy to get these three special ladies in my life all in one place, who fill up my life with their light, presence and unconditional love.

Following on from attending a Who concert and meeting Pete Townshend, I felt that the following day Thursday was the ideal time to pop in to my local St Giles Hospice day centre to introduce Carrie Martin to my friends in the MS group who gather there on Thursdays.

This we did and here is the photographic evidence of us performing in their dining room for the small, appreciative assembled gathering. My thanks to Julie Nicholas for letting us drop in at such short notice. 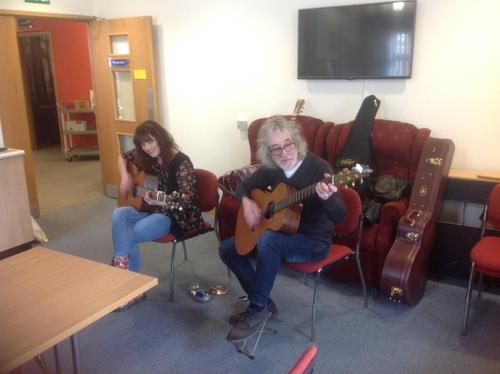