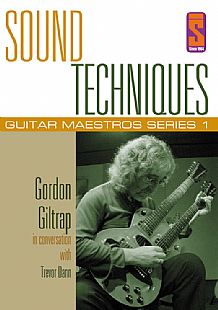 Performing with an astonishing array of guitars, this DVD showcases Gordons incredible talent and features stunning live performances including At Giltraps Bar, Lucifers cage and the ever popular Heartsong.

In conversation with Trevor Dann; Gordon talks about his amazing guitar collection, his tunings and his remarkable 40 year career.

This DVD is a fantastic addition to the Guitar Maestros series

Watch two short video clips Heartsong and Lucifer's Cage
PAL / NTSC
Please note that these DVDs are dual disc, PAL (Europe & UK) on one side and NTSC (USA & Japan) on the other, please check which side you require before placing the DVD in your player.

WHAT DO THE MUSIC PRESS THINK OF THIS SERIES ?

A must see for fans of finger style guitar - Guitar Buyer

A Welcome addition to any guitar enthusiast's collection**** - Maverick

No self respecting acoustian should be without the set - Acoustic


Review by Dave Kidman April 2007 on the NetRhythms website

Following swiftly on from the Martin Carthy issue, this is one I've been eagerly anticipating. Gordon's another of those unsung heroes of the guitar, a consummate maestro who's refreshing in his altogether unassuming expertise. This latest title in the marvellous ongoing Guitar Maestros series follows roughly the same format as the previous seven: the Main Feature, lasting a little over an hour, consists of an interview incorporating live-in-the-studio performances of eight pieces, and it's followed by nine additional tracks and a twelve-minute bonus feature in which Gordon demonstrates the use of technology to enhance his playing. It's worth mentioning the latter aspect of Gordon's art at the outset, for it's one that despite best intentions is sometimes misconstrued; Gordon's view is that while acoustic music is essentially honest music, the organic nature of his compositions does in fact lend itself to the occasional use of creative technological enhancement to keep the music (and the performer!) fresh. While some guitarists may hide behind technology to mask their own inadequacies in technique, Gordon emphasises the selective nature of his own use of its possibilities; the bonus feature, Dodo's Dream, is a very persuasive demonstration of this indeed.

Elsewhere, the focus is firmly on direct hands-on-frets-and-strings, on a selection of pieces on which Gordon shows himself to be master of virtually any musical style (even though he modestly considers himself to be a living embodiment of the guiding principle of exploiting one's own limitations!). From the folk-style fingerwork of Maddie Goes West, the medievalism of Lord's Seat (much admired by Ritchie Blackmore) and the delicate harping technique of Nursery Chimes to the devilish intricacy of Lucifer's Cage and the exciting, dashing, breakneck breezy percussiveness of Gordon's erstwhile hit single Heartsong, this is an enchanting and stimulating set. From the very start, we get to appreciate the benefits of Gordon's unique right-hand technique (sometimes described as crab-like), whereby, using the little finger in tandem with the plectrum, he's able to integrate a harmony line into his playing. Other hallmarks of Gordon's technique are the gentle ringing tone and the delicate resonances he conjures from creative use of harmonics. When asked whether he practises (!), Gordon replies (with a typical combination of honesty and playful delight in sharing a confidence) that the best form of practice is the act of composition, the challenge of coming up with a melodic idea and then trying to play it! All of the pieces Gordon plays during the course of this DVD are his own compositions, primarily in the earcatching but tricky soundscape vein (sometimes, fairly reasonably, compared to Mike Oldfield - another former singer-songwriter who forsook singing for playing).

In communicating the music to us, Gordon treats us to a guided tour of his various guitars, relating the origin of each one and explaining any modifications which he's needed to make to the instruments themselves (after all, Gordon says, the instruments are organic, living objects). This aspect of the interview segment will surely be guitarists' heaven, with the Fylde Signature model (immortalised by Mark Radcliffe in his novel Northern Sky) possibly the pride of Gordon's collection but others (from the humble "car boot sale", "baby" and "tiny" models to the more showy but intensely practical double-necked John Bailey ) proving of much fascination to him too. And what a fantastic sound Gordon coaxes from the strings: often technically complex in execution, sure, but always highly musical and invariably intriguing and immensely appealing to listen to.

Gordon is a true visionary of the guitar, and this DVD will prove a revelation to the viewer I'm sure; perhaps more so than some earlier issues in the series which dealt with more widely celebrated performers, it's as much a taster that will introduce Gordon's virtuosity and versatility to folks to whom he's (still) but a name, as a glorious set of intimate performances. It really does do Gordon's talents justice. The camerawork is ideally executed, allowing close observation of plenty of all-important detail yet never becoming tedious or obscuring the wider picture of the rich musical canvas. The interview itself is well carried out, Trevor Dann knowing exactly when to pursue a line of enquiry further and when it has briefly and sensibly run its course. The sound quality is excellent, naturally, and the various access points and menus are simply and intelligently managed.

WHAT DO THE PUBLIC THINK OF THIS DVD ?
Review by Tim Blixt

It should come as no surprise to readers of this site that the reviews of Gordon's recorded work included on the site have been submitted by reviewers who are, to say the least, highly taken by the efforts of Mr. Giltrap. That said, in approaching the task of reviewing this latest effort from Gordon, I assure the reader that I did as much as humanly possible to divorce myself from the passion I have for the man and his music. To the extent possible I attempted to listen and view this product with the eyes and ears of a newcomer to Gordon's work. And with that said---I can only tell you that this is a brilliant work that very well may stand as the greatest single recorded testament to Gordon's work (how's that for unbiased??)

First some of the basics. This disc is the eighth in a series of dvds, featuring the work of some of the most notable guitarists of our generation, released on the U.K. based Sound Techniques label. The format for these discs is that the artist performs for, and is interviewed by, a host in an exquisitely converted Coach House on the grounds of a privately owned estate near Downham Market in Norfolk. The Coach House has been lovingly converted, at no small expense, to a recording studio by renowned studio master Geoffrey Frost. By any measure, the Coach House is a state of the art facility delivering spectacular audio and video product. A warm blue background wraps the artist in a comforting back drop that enhances both Gordon and his incredible array of guitars.

In this case Gordon is interviewed by Trevor Dann, the veteran BBC broadcaster whose credits include working on Top of the Pops and his own Classic Gold Albums programme. His recent book about the life of Nick Drake, "Darker Than The Deepest Sea", has been very well received. Trevor shows both an interest in, and awareness of, Gordon and his music. Trev's questions and insights keep the show moving and elicit wonderful, witty responses from Gordon. Not only are we treated to a wonderful Gordon Giltrap performance, but thanks to Trevor, we learn a lot about Gordon and his creative process that the music itself does not reveal.

The audio track for this disc is a crisp clean stereo mix. Though an insatiable fan such as myself does mourn the lack of a 5:1 mix, this stereo mix more than supports the impeccable music being performed. The disc is broken into two parts. The first hour or so features Trevor interviewing Gordon about each piece he plays---eight in all. A second portion of the disc has Gordon performing ten additional "bonus" tracks without Trevor's help. The disc comes in at a very healthy 110 minutes of performance. Additionally, the disc is a two sided affair, one side playable on PAL systems and the other playable in the NTSC format.

And now, about the aforementioned performance. I hope it goes without saying that when an artist has achieved what Gordon has, an award winning career spanning some four decades, hit albums, hit singles, consistently successful tours, and the plaudits of fans, peers, and critics alike, it's a given that the guy knows his way around a fret board. Any Gordon Giltrap performance will have a number of opportunities for us fans to say "How the heck does he do that?" And those moments abound here. The camera work is superb, allowing all the anoraks to suss out exactly what each finger was doing when that note was played.

But jaw dropping technique is what could reasonably be expected from a guy who's been at this as long as Gordon has. What this disc has, in spades, is undeniable evidence that Gordon Giltrap is, very simply, one of the true melodic genius guitarists of his generation. Almost every period of Gordon's lengthy career is represented here--and what I like the best is that so much of Gordon's recent work is featured. I think it can be agreed that it is a rare artist who seems to be able to tap his/her creative well as richly in the fourth decade of their career as they were able to do in the first ten years. Gordon is just such an artist. Included in the first portion of the disc are fan faves such as ""On Camber Sands", "Appalachian Dreaming", "Down The River", and a single version of "Heartsong". (an expanded version of "Heartsong" appears in the bonus tracks section). In addition to the relatively new "Appalachian Dreaming", there are such recent gems as "Maddie Goes West", "Mrs. Singer's Waltz", "Kaz", and the extraordinarily beautiful "Simply Margaret". A particularly stunning version of the wonderful "Sallie's Song" is included in which Gordon coaxes sounds out of the old double neck that I don't know if even he knew were there! Additionally, a final bonus track is the amazing version of "Dodo's Dream" that Gordon has been featuring in concert recently. And yes, the essential "Lucifer's Cage", in all its' manic glory, is included here as well!

Of course no single document can adequately relate the full scope of a 40 year career. Gordon's stunning career is, thankfully, very well documented on both cd and dvd. Elsewhere on this site, you will be able to view no less than 34 cds of Gordon's work that have been produced over the years---28 of which are still available for sale. In addition to this dvd, there are two others, one of which includes a live cd as well. No single disc in this massive collection can be said to be the "definitive" Giltrap collection. In my humble opinion, however, this Guitar Maestro dvd comes as close as one disc will ever get to being "the one" all Giltrap fans must have as well as the one disc that can begin to show a newcomer what Gordon Giltrap is all about.