The story of a very special guitar 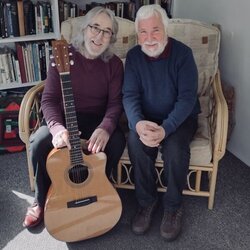 Our good friends Chris and Annie Abrams came to stay in Feb 2022. Whilst they were here I did some work on a couple of Chris’s guitars. The most significant being my old FYLDE custom made for me by Roger Bucknall in the late 70’s. All I did was basically to lower the action a tad and re strung it!

This guitar has an incredibly chequered history. I used this very instrument on so many of my recordings at that time. The guitar is all over the Fear of the Dark album particularly the opening track and Roots, in fact probably the entire album! This lead on to The Peacock Party album and beyond. You can hear its sonic beauty on The Tailor Bird for instance.

I loved this guitar. It was very lightly constructed for the super light gauge strings I used at the time and had a huge sound in spite of the light strings. Sadly it eventually started to split and fell apart. It was then restored with a completely new top by a guitar maker called Phil Vigor who did a cracking job. At that time dear Roger was so busy with the FYLDE business that he just didn’t have the time to restore it, but more of that later.

The guitar sounded fine but obviously lost its greatness in terms of its original sound, but that’s understandable. I kept the original top and years later sent it to Rog who pretty much replicated that 70’s version and the result was my beautiful custom FYLDE now owned by Nicholas Hooper who declared it the finest guitar he has ever heard or played. I used that guitar for numerous recordings namely the From Brush and Stone album I did with Rick Wakeman and latterly with Oliver Wakeman on our Ravens and Lullabies album.

It was this very first 70’s guitar that turned Sir Cliff on to Fylde’s after he played it at a mutual friends house and just fell in love with it, ordered one from Rog, and used it for many years preferring it to his beautiful old Gibson J 200. I have no idea if “Sir” still has it, but I would love to see it again! “Sir” is the current owner of my FYLDE Tree of Life guitar which I gifted to him!

In the meantime I loaned it to my old friend, the horror writer James Herbert (RIP) who kept it by his desk for many years and would strum it in between writing his million selling novels. After he passed away it returned to me.

Eventually I decided to sell it to my friend Chris, who consequently approached Roger to get it restored. Rog had it for over a year and would do various bits to it in between his other work. All the details are in the enclosed article that he wrote for his FYLDE news page at that time. 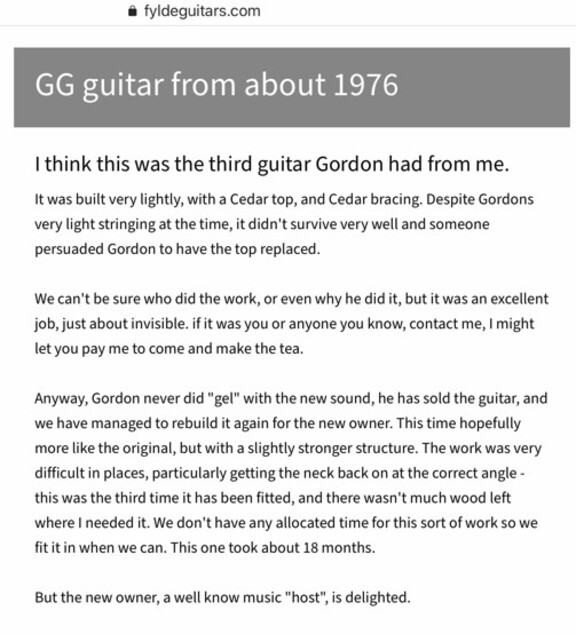 You are probably thinking dear reader that Gordon doesn’t hang on to guitars for very long! Let me tell you why.

I am the luckiest person in the world to have such a generous and patient friend such as Rog Bucknall and every so often I purchase a new guitar from him, which in turn supersedes the older one which consequently stays in its case and doesn’t get used as much. I have never been a guitar hoarder, and try not to get too attached to “things” and as we are all just custodians in our short lifetime I like to pass on a bit of my history to other players who love them equally and continue to play them. Part of me remains with the instrument, hopefully inspiring its current owner. I hope so anyway. 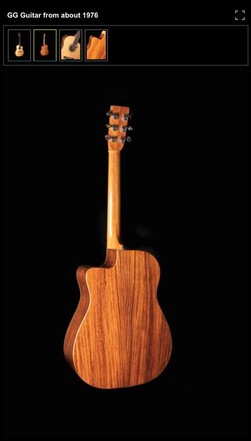 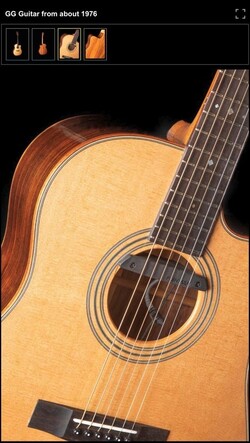 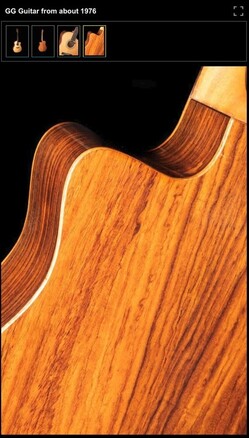 So there you have it a short history of one of the most remarkable guitars it has been my privilege to have owned. It has now gone to a good home and I know it will continue to give pleasure to Chris in its new form that Roger has lovingly restored. No one but the great man could have done the work and I thank him for it. Rog you are and continue to be a genius and an inspiration.

A final word of thanks to Chris Abrams for getting in touch with Rog in the first place to see if it was possible to resurrect this amazing instrument.