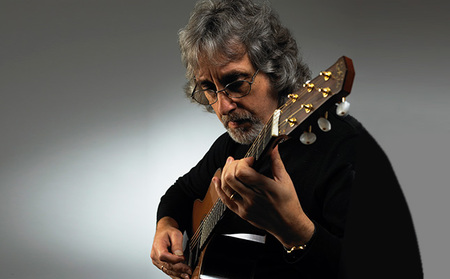 I’ve written about Gordon a number of times in the past, and this time I want to cover slightly different ground, as I think I have a privileged viewpoint of his career so far.

Gordon has been a professional musician for over 40 years, and a close friend of mine for most of that time. He was my first customer, and our lives have crossed again and again, not just in music but at many personal times as well. He has a stupendous talent and like other people I admire, works far harder behind the scenes than anyone would ever imagine.

The usual route to celebrity status is to concentrate on just one small area of work so that the message is continually hammered home. Anybody with wider interests finds it rather more difficult to gain fame and fortune because the message is spread thinner and diluted. Gordon’s performances and compositions have covered a wider range than several other guitarists put together, yet despite working at the very top of his field for so long he is still acknowledged more by professional colleagues than by the record buying public.

Gordon played to the same audiences and in the same Folk venues as Bert Jansch, Martin Carthy and John Renbourn, but his playing style had developed along different lines. Guitar heroes Bert Weedon and Hank Marvin used a plectrum, so that is how Gordon started, and by experimenting with how to play more than one note at once, he came up with his unique style of plectrum and little finger – the fingernail heavily reinforced with nail varnish and tissue paper. By the time he realized that his right hand actually had more fingers than that, Gordon had found ways of getting in the extra notes by playing far faster than anyone else, and his unique style was born. It’s interesting to make a couple of comparisons - Mark Knopfler sometimes plays with pick and fingers in combination rather than just one or the other, and of course, when Django Reinhardt lost the use of most of his left hand, he worked so hard to compensate that he overcame the apparent deficiencies to found a whole musical genre.

Although his parents had never told him that he had ten fingers, Gordon worked out for himself that he had the usual quota of two hands, and saw no reason why his right hand needed to do all the work, often starting a run with a note plucked by the left hand and continuing with staggering amounts of “hammering on” and “pulling off” while the other hand had a little lie down in a dark room.

Along with other musicians who were guitarists first and foremost rather than singers or comedians, Gordon’s playing has always suited a concert situation best. Arts centres and small halls are better for an audience who come to listen rather than participate. (Have you ever tried to sing along to “Fast approaching” or “Lucifers cage”?). The move away from clubs to larger venues came slowly as his reputation spread, and the more appreciative audiences encouraged Gordon to write more delicate pieces rather than his original fretboard fireworks. He even began work on a guitar concerto for steel strings at one point, but it sparked so many ideas that he has continually stolen from it to feed other projects (there’s still time Gordon). Gordon’s way of composing is to let a tune develop on the guitar and immediately note it down in tablature, trying hard to avoid the obvious traps of playing within easy, recognized frameworks.

In common with many other natural musicians, Gordon doesn’t “write” his music in standard notation, in fact, traditional dots would struggle to capture enough of his style to make it recognizable. He sits in his studio with his guitar, slowly building a piece, and then relies on memory alone to perform it when complete. How he manages to perform a complete concert, including work from thirty years ago or more is beyond me, although to be fair, this way of working does have the major advantage that a piece is under constant development. Martin Carthy once explained to me that a performance or a recording is only a “snapshot”- “captured at a point in time”.

New guitars are always a source of inspiration for Gordon, and Fylde guitars have been a more or less constant “Muse” since about 1971. I remember him writing one new piece on a brand spanking new Fylde guitar at my flat in St Annes around 1973, eventually using it on a collaboration Album with Rick Wakeman.

Gordon has always liked to support English guitar makers, and nowadays relies largely on his Fyldes and Armstrongs, but he has been known to use guitars made by John Bailey, Roger Williams, Tom Mates, Steve Toon and Dave Hodson, plus Ovations, Martins, Hofners and a collection of odds and ends from car boot sales which he somehow works in to his act! Plenty of stories and inspiration there, and lots of fun for the audience.

At the last count, I have made about ten guitars for Gordon, and between us we are usually planning the next one. He always gives me freedom in the design so that we can both contribute to the music, and sometimes I let him think he’s getting his own way. I know his style so well, but it’s always a challenge to help him find new ways of expressing himself, a challenge that I enjoy immensely.

I’m going to change direction for a moment to discuss another side of Gordon’s music. In 1978 he wrote “Heartsong”, which has since become his signature piece, a fast, furious, dramatic showstopper, and he became one of a tiny number of acoustic guitarists to reach the UK hit parade. I have to add here that of course it was written and performed on a particularly nice Fylde guitar which is now owned by Sir Cliff Richard! Gordon appeared on “Top of the Pops”, “The Old Grey Whistle Test” and several variety TV shows. “Heartsong” was used for a long time as the TV “Holiday Programme” theme.

Gordon moved up in the world (question mark on the direction here!), bought some leather trousers and became a pop star. His stage shows included two keyboard players (both called Roger), a drummer and bass player, a light show and bats flying across the audience! Fame and fortune. Well, actually, I remember one night I met them all for a curry after the show and we just managed to cover the bill by emptying the small change from all our pockets. That, I am afraid is very often the reality of showbiz, but it did introduce Gordon to a whole new world. Being a musician in London in the 1970’s meant that he already knew many professional guitarists and session musicians such as Big Jim Sullivan, but now he was meeting a different type of musician, names such as Brian May, Steve Howe and Rick Wakeman.

I think it’s fair to say that eventually Gordon became a little disillusioned with “fame” and made the decision to move back into the real world by teaming up with major artists in other areas of music. Typically he did not choose an easy route, testing himself by touring with the violin Maestro Rick Sanders and world renowned Jazz player Martin Taylor. I saw the shows, he passed the test.

Then another chapter to Gordon’s work opened - his collaboration with Cliff Richard for the musical “Heathcliffe” in 1996. Cliff had a part specially written in the show for Gordon, as “The Minstrel”, Gordon appearing as a very dark and mysterious figure, I think Cliff didn’t want to be upstaged! For Cliff’s (now Sir Cliff of course) recent 50 years in show business Gordon was commissioned to write a dedicated work for the celebrations.

Working with such players has broadened Gordon’s range even further, but he is never content- in more recent years he has regularly dueted with the renowned Classical Guitarist Ray Burley, and has somehow found time to perform with the London Symphony Orchestra, the Sheffield Philharmonic Orchestra, the Wren Orchestra and many others, playing in major concert halls and even in the Rosslyn chapel of “DaVinci Code” fame. The wonderful Julian Bream has been a constant inspiration (for me too).

We mustn’t forget that Gordon is not a “Classical” player in the usual sense of the word, and he is probably unique in being able to smuggle a steel string guitar into such company and be welcomed by them - a true mark of respect. What’s that bulge in your trousers Gordon? A guitar? Yeah right.

Gordon now has 30 albums and DVDs under his belt, plus many compilations, one of which was the Fylde Acoustic album in 1976, playing Elizabethan Lute music with John Renbourn. In addition to all the names mentioned above, if I had more time I would explain his involvement with Bert Jansch, Midge Ure, John Etheridge, Juan Martin and many more. I don’t know anybody who has worked so hard and covered so much ground