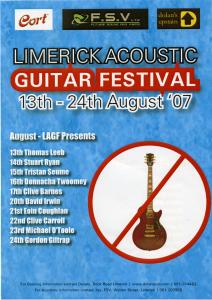 Gordon reports on his experiences of the Limerick Guitar Festival 2007


Ireland. Land of The Chieftains, James Joyce, River Dance, my forefathers and some of the finest music known to man...
Hilary and I travelled over for my concert at the Limerick Guitar festival on the 24th, the day before by Seacat from Holyhead. We stayed in what was advertised on the net as a 'delightful' B & B in the fair Holyhead. Delightful it wasn't and I treated myself to the worst curry known to man on our arrival. Holyhead close to the docks can be pretty grim it has to be said. Anyway enough of that! The crossing was a wee bit choppy, and once we had arrived in the Emerald Isle our journey up to Limerick was a bit of a nightmare due to major roadwork's and dodgy sign posts. We got VERY lost and stopped at DUNDRUM for a coffee and went in search for a map. We finally arrived in fair Limerick at Jury's hotel late afternoon.

My main memory of Limerick was playing at the University many years ago and receiving a standing ovation for my performance...a rare thing at the time 'anywhere' for me. So it was with these fond memories that we of course looked forward to our trip.

Dolans Warehouse was situated just down the road opposite the docks. It is THE venue to play in the town, and we decided to stroll down after our arrival and meal to meet our host JAY.

Jay is the most charming and wonderful man one could ever wish to meet, and he has done a stunning job of organising this event, without a shadow of doubt. He showed us the hall where I would be playing, and also the smaller space where all the other guests had played during the course of the event. Both spaces were delightful, and I commented that I would have been delighted to have performed in either, but the larger space had been allocated for me, so that was fine.

On the afternoon of the concert I gave a two hour workshop with some of the finest players one could wish to meet, young and not so young, and it all came together well. I was treated to an ensemble piece from the group that they were going to perform prior to my spot that evening. It really was a great piece that sort of combined all the influences from the various 'names' that had appeared during the festival.

The evenings event was a bit of a strange one in as much as my performance clashed with the Rugby, hence the attendance was not as one had hoped, but apart from that a great crowd, I was well received, and it was joy to meet up with writer and broadcaster John O'Regan after the show and for coffee the following morning prior to our departure.-

This festival was a real cracker and I take my hat off to Jay for doing such a brilliant job. Let's hope they repeat it next year eh!

Our journey home was fortunately less eventful, and we decided to pass on the 'delightful' B & B in Holyhead, and drove the 150 miles home to sunny Sutton Coldfield!  Gordon

On 24th August 2007, Gordon will be making a rare appearance in Limerick, when he headlines the Acoustic Guitar Festival.

Running from 13th - 24th August it features 10 well known players, each giving a workshop in the afternoon, followed by a concert in the evening.

"Toward the end of August, Hilary and I will be crossing the Irish sea to appear at the Limerick Guitar Festival. We always love our visits over there and completely absorb the whole atmosphere of the place.

I remember the first time I played at Wheelans in Dublin - some folk turned up and proclaimed 'we are the Dublin Giltraps' much to our joy and amazement. The Giltrap name is quite an unusual one and can be traced back to the early seventeen hundreds when the name Giltrap was first recorded. Of course the Giltrap name comes from my fathers side of the family, and my grandfather Edward Giltrap was born in the city of Cork and travelled with his family over to England when he was just the tender age of fourteen, when he joined the Royal Artillery as a boy soldier and eventually rose through the ranks to become a bugle major in the Artillery band. Many of you will remember my one liner about my grandfathers main instrument in the band being the Cello and the Trombone both of which he played simultaneously.... ha ha ha

My great grandfather I believe came from Bray south of Dublin, as far as I know there has always been a strong military connection with that side of the family, but to my knowledge my grandfather was the only family member to pursue a career in music, albeit in the direction of classical music. I have to say that it would have been good to know that somewhere way back, there may have been more musical Giltraps possibly embracing traditional music, but that may be stretching the romantic side of my nature too far!

The last time I played in Limerick was many years back at the university where the evening was fraught with disaster in the form of the Bose PA completely dying on one channel and me struggling manfully through the set on one speaker BUT, at the end of the evening the whole lecture theatre audience stood up to give me a standing ovation, and believe me that sort of thing doesn't happen very often, certainly not in the UK anyway, with us Brits being a more sedate polite bunch!

Hilary and I are very much looking forward to returning to the fair city of Limerick and playing at the festival.

SEE YOU THERE THEN?

My Best to you all".

For more information please see the concert guide here and here or read the articles about the concert from recent editions of the Limerick Post in PDF format below.

There is a new MySpace Page too !