The Long Road Home Book and CD by Raymond Burley 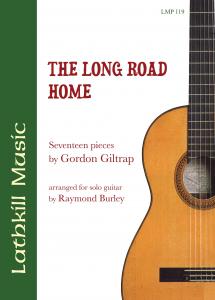 Classical guitarist Raymond Burley has released a book and CD both called 'The Long Road Home' consisting of 17 of Gordon's pieces.

Raymond Burley is one of the UK's most experienced classical guitarists having performed countless solo recitals, concertos, on film scores, radio and television, and in virtually every possible guitar ensemble combination.

His partnership with Gordon, as one half of the duo Double Vision, has given him a classic insight into Gordon's music and has made him the ideal candidate for this unique 'project' of offering these compositions in 'classical' arrangements (presented in 'standard' tuning with the occasional dropped D).


There are 17 pieces in the book and on the CD, with all arrangements by Raymond Burley, for solo guitar. The CD is also included in Gordon's discography section Click here 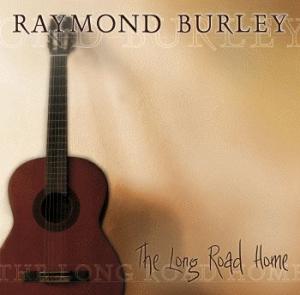 The following review of the evening was written by Warwick Mason 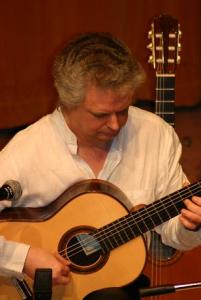 Oxfordshire based Raymond Burley is a popular soloist, arranger and teacher who has played regularly throughout Europe , Canada and the USA . In addition to his solo work, Burley has worked in ensembles that include the Alice Arzt Trio in New York, the Rodrigo Trio and duos with John Mills, John Feeley and latterly with the British steel guitarist Gordon Giltrap in the duo Double Vision. This latest collaboration lead to Burley arranging and recording seventeen of Giltrap's pieces on the CD The Long Road Home.

St Paul 's Gallery in Birmingham was the venue for the launch concert of The Long Road Home recording and is an art gallery and fine art framers who use their main display room for concerts. The room's starkly white walls are vividly broken up by black framed prints of 60' and 70's pop art with a polished wooden floor creating a tight acoustic.

Burley presented a well constructed programme of eleven pieces by Giltrap interspersed with works by Sanz, J.S. Bach, de Falla and Barrios. Setting the lesser known Giltrap compositions with more familiar classical repertoire worked well and enabled the listener to stay focussed and interested throughout. His playing was authoritative and musical from the beginning with his Philip Woodfield guitar fully expressing the wide range of nuances he required of it.

The first two Giltrap pieces, A Misunderstood Man and Simply Margaret opened the concert and the accessible melody lines which are the hallmark of this composer were immediately in evidence. The performer's arrangements are pleasing and his musical intentions uncluttered in execution, it felt like these pieces had always been played on the classical guitar. Moving into four pieces by Gaspar Sanz , Espanoleta, Pavanas, Rujero and Canarios, Burley displayed widely contrasting dynamics and was clearly enjoying himself, even moving up a gear in expression with the next three Giltrap pieces Who Knows Where Tomorrow Goes, Secret Valentine and From the Four Winds.

J.S.Bach's Sarabande and Double (BWV 1002) was a contrast I had doubts about in the programme but Burley showed precision and assertion in bringing out the cleverness of the writing and it actually complemented the programme. The next four from Giltrap; London, The Long Road Home, Quest for Nonsuch and Tailor Bird were equally well arranged, exploiting the guitar's harmonic idiosyncrasies as well as providing some technical challenges, specifically in Tailor Bird.

Manuel De Falla's well known Homenaje was played not as a funeral march but more as a dance representing the composer's original tempo intentions and is the better for it and the Barrios Julia Florida lollipop that followed was just right with Burley's fine touch well established. The largely non-muso audience seemed to be thoroughly enjoying the whole experience by now.

The concluding Giltrap works; A Christmas Carol (based on the Book not an actual Carol) and For Those Who Bring Sunshine were executed with verve and excitement and brought a very successful concert to a close with a Bach partita providing a well received encore.

The presentation of the book (published by Lathkill publications LMP119) is of top quality and is highly faithful to Raymond's wonderful recording of these works, (Hypertension Records: HYP 7256) which is available from 22nd Oct 2007 on CD.

The Long Road Home book published by Lathkill publications LMP119 costs £11.95 and can be purchased via the Spanish Guitar Centre (Guitarnotes) Click here

Below are some short MP3 samples, there are more on the Discography entry.