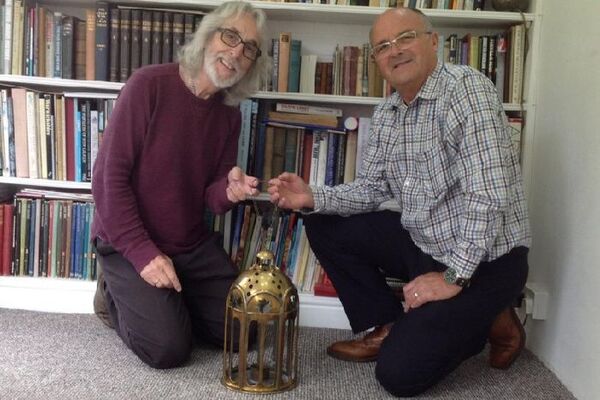 This month's news is really all about the day Hilary and I along with our friend Martin Green spent in London as guests of David Ison the Dean of St Paul's Cathedral. We had travelled down by hired car to hand over the replica lamp that featured in the iconic painting by Holman Hunt, The Light of the World.

Hilary had the lamp commissioned by craftsman Mick Dolby (see photo above) as a gift for my 40th birthday. You can imagine my feeling on the morning of my birthday to be confronted by this stunning object. This lamp as far as we know is the only copy in existence. The original that Hunt had made for the painting sold at auction in 2005 for £52000 to a private collector. 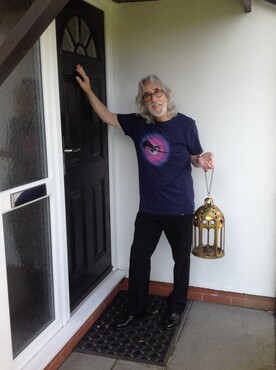 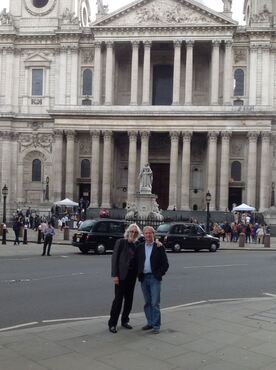 Hilary and I had been talking about finding a home for it for a long time. Hilary approached Keeble College Oxford that houses the original painting to see if they wanted the lamp, but they passed on it saying that they had nowhere to display it, she got a similar reply from Manchester Museum and Art Gallery that has a copy.

The idea of approaching the ultimate venue (St Paul's) was too far-fetched for us, but Hilary being Hilary does not give up, and said we should send a package to the Dean as we had nothing to lose. In less than a week we received the most glorious reply from David Ison saying that he had followed my career on and off over the years and would indeed love for St Paul's to be the new home for our lamp.

He is obviously a man of vision because he stated in the letter that he would like the lamp to be seen and touched by visiting school children from all denominations, he also stated that he wanted the lamp to be a focus for prayer.

A date was set and off we went. We were invited to lunch and for the Dean to personally give us a guided tour. It was an honour to meet David who is the one of the nicest and self-effacing men you could wish to meet. We had expected to maybe have staff serving lunch for us in the Deanery. We arrived half an hour early and was met by the housekeeper to be told the Dean was out. Little did we know that he had nipped off to the local M and S to buy our lunch! 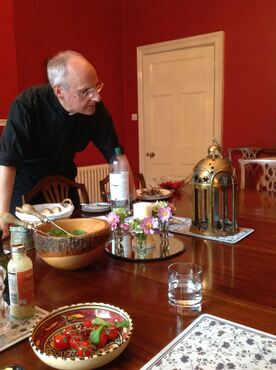 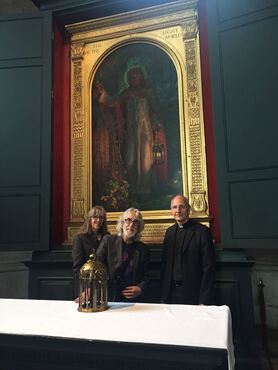 We had gone for a coffee to fill up the time and when he answered to door to us he had just laid the table! Lunch was a delightful mixture of salmon, salad, and fresh bread followed by fruit salad. I forgot to mention that Robbie our driver was able to park in the Deanery courtyard whilst we had lunch followed by our guided tour of one of the great Cathedrals of the world, being shown behind the scenes and using every photo opportunity possible to remind us of this amazing day. 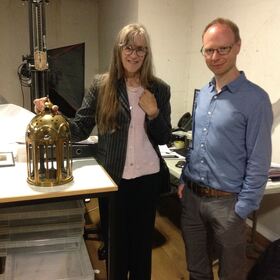 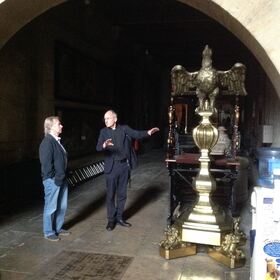 This truly was a day to remember and I was so looking forward to it, as we all were after my brief sojourn in hospital. Days like these truly give one a boost and reminds you that life can be good midst the suffering and sorrow that we all experience from time to time. I like to think it gave us all a lift. 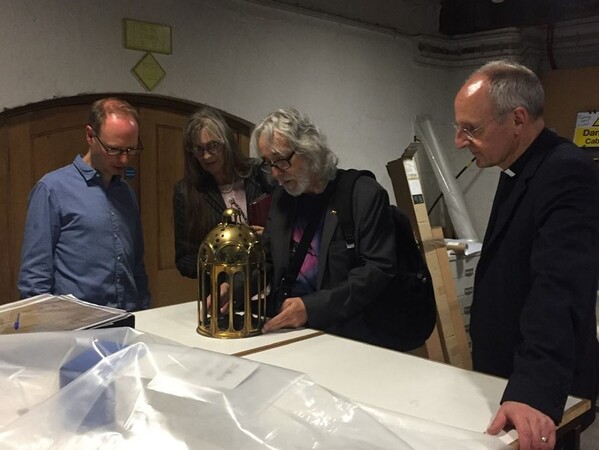 Our thanks go to David Ison and to my extraordinary wife who just refused to give up at the first obstacle to find a home for our beloved lamp. Thank goodness she didn't, and thank goodness that Oxford and Manchester passed on having it, because it truly could not find a better home than the glorious St Paul's.

We shall miss the lamp which was featured on The Last of England album, but we know it has gone to a good home where it will be seen by many over the coming years.

I hope you enjoy looking at the photographs.

It has been a while since I posted some pics of a new guitar acquisition so here are the front and rear view of lovely Fender Squire SE electric picked up for a crazy £20 from a local car boot sale. I'm sending the rear view of the neck so you can see the unbelievable figuring on the maple neck. 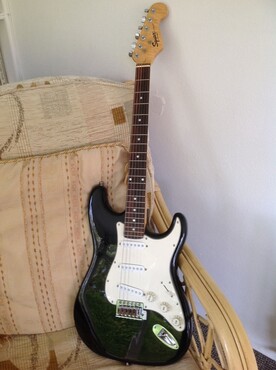 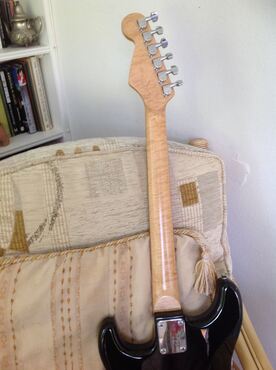 You usually only find this quality of figured maple on high end electric guitars. This one is about 18 years old and was sold as a budget instrument but believe me this really is no budget guitar. I spent most of the day taking it apart, cleaning it, adjusting the neck angle with shims, cleaning the pots and restringing it. It now looks and plays superbly. I have even composed a new piece on it and it sounds glorious. In fact it sounds like a Strat!

I well remember another car boot find many years ago in the form of that three quarter size classical guitar that somehow changed organically into a high strung instrument with the pin at the 10th fret to retain the first string plus the capo and a close to DADGAD tuning which in turn created the inspiration for a few tunes, namely Appalachian Dreaming and Rain In The Doorway. 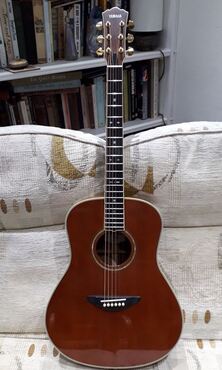 This lovely old Yamaha LA 8 has been in the studio with me of late on a new tune. I have owned three of these over the years and they are cracking instruments

On a personal note I'm recovering remarkably well from my recent surgery and have been determined to get back in harness as soon as possible and have been looking forward to my first concert in Norfolk (Aug 24th) reviewed below.

THANKYOU for all my get well cards and good wishes on Facebook.

My first concert since surgery in June at Sharrington Village hall went extremely well. My thanks to Chris and Annie Abrams for organising the concert and for their superb hospitality. Great to see friends Keith and Fiona Meredith there along with Rick and Paula Olsen both these ladies have been immortalised in tune over the years with Fiona's Smile and Paula's Passion.

My thanks to Terrence for a cracking opening set. We had a super time with Chris and Annie and on the way back stayed with the Olsen's both VERY special couples. 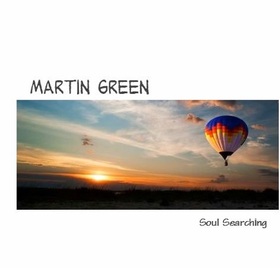 Over the years I have made mention of music that has moved me in some way and that I felt worthy of sharing with the world at large. Artists like Carrie Martin, The Kimberleys, Nothing by Chance, and many more.

The artist I should like to throw a light on this time is my dear friend Martin Green whose latest album Soul Searching has touched me very deeply. I was privileged to be asked to contribute to the album's opening track Armistice Bells. Up until receiving the finished CD today I had not heard any of the other material. I was very impressed indeed!

If you like acoustic guitar playing filled with emotion, melody and atmosphere in abundance you will truly love this album.

In the main it is just Martin alone with his acoustic, but on the remaining tracks Andy Green (no relation) has added some very tasteful keyboards and programming.

Outside of his life as a minister in the Church of England, folk will not know of his gift as guitarist and creator of beautiful melodies.

Check out his website to find more information as to how to get a copy of the album. www.martingreen.me.uk

You will not regret it I promise you.

As soon as I feel recovered enough I shall be planning some more Sharing Days, and will no doubt be mentioning my hybrid right hand technique of plectrum and little finger, which although completely strange has inadvertently over the years help to create what is now widely regarded as the GORDON GILTRAP sound which enables me to go from delicate picking to instant power chords ala Pete Townshend.

Heartsong and Lucifer's Cage are prime examples of this. There will be the usual special guests sharing their music and technique to the assembled company. Watch this space!
Tweet
facebooktwitteryoutubeitunesnumubuicon pack by Komodo Media, Rogie King