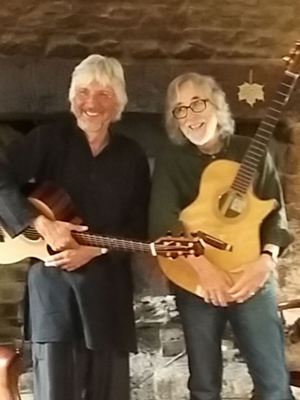 My concert with Nick Hooper on November the 25th has to rank as one of the most beautiful musical experiences of my life thus far!

Why you may ask, bearing in mind all the concerts big and small I have had the pleasure of performing over many many years?

The answer is quite simple. The music and the performance comes from a place of non-ego. Neither Nick nor I were trying to dominate the evening. Neither Nick nor I had a need to impress anyone least of all the audience or indeed ourselves. The evening was all about sharing, having fun, and performing for the sheer joy and privilege of being able to do it.

All I wanted for the event was to let the audience see the incredible gifts that Nick Hooper has as a composer and brilliant guitarist with an amazing ability to improvise over anything I was capable of throwing his way. The evening was not about me but as far as I was concerned about him. He in turn told me afterwards that all he wanted from the evening was to see me shine!!

How wonderful in this day and age to meet someone who is so like-minded musically but also dare I use the term "spiritually “ in tune with me and in turn, in tune with each other.

When Nick first asked if I would do this concert, he suggested that he go on and do a spot and then leave the rest of the evening to me to do my thing. I replied “certainly not Nick" this is going to be a totally shared evening, which is what it turned out to be.

What Nick and I have as a duo is a very precious and rare thing in the world, and I'm mindful to tread very carefully along this shining path of music and friendship, and if it is meant to grow in a future direction, then let it grow naturally and organically without thinking in terms of "career" and albums, tours and success. Nick and I have trod this dark path in the past and have no intention of going down that rocky road again.

Believe me I can't wait to share the stage again with this special person, but it will have to be on our mutual terms and from a place of non-agenda. Who knows what form it may take musically? For example Nick's beautiful wife Judith is a brilliant violinist and I for one can hear her fiddle weaving in and out of some of our sinuous guitar arrangements, so if that is meant to be then so be it. Just watch this space my friends.

Back to the concert...What can I say? The audience were joyful, the sound was sublime, and the one disappointment out of the whole evening was the fact that our lovely webmaster Sue and her other half Mike couldn't make it because Sue was poorly literally the night before the show, and they had travelled all the way from Kent to attend the concert and do some filming for a possible YOUTUBE inclusion. We were SO disappointed.

It gave me great pleasure to dedicate one of the pieces to Nick and Judith's lovely daughter Rose, and to see her beautiful smile when she heard the dedication was just sublime!

I'm looking forward very much to the two teaching events so far booked for 2018. The Uttoxeter guitar weekend in January and my Sharing Day in February. The January weekend event is of course a slightly different beast to the Sharing days in as much as it is more focused on three chosen pieces Ecchoing Green, London, and Christmas Carol. All three pieces I feel are a tad more accessible than some of my more challenging pieces, but at the same time have their own mixture of technique and emotional content.

The piece chosen for the Sharing Day is a relatively new piece (two plus years old) from the new album This Fathers Love, a personal favourite of mine right now in my favourite tuning CGCGCD.

All the details can be obtained from Sue Holton at ggiltrap@gmail.com and we look forward to seeing familiar faces as well as new ones at each event. Please book your place early to avoid disappointment, particularly the weekend one where spaces are limited to 12 students maximum. 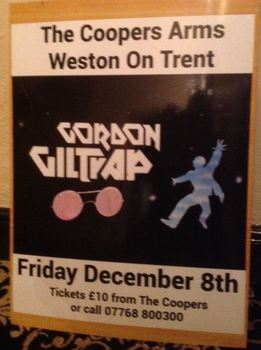 What a cracking night at The Coopers Arms, Weston on Trent last month. David Ford the promotor did a fantastic job of promotion, and the place was indeed packed. My special guest for the evening was a name mentioned last month, young Oliver Keane. Oliver played a lovely half hour set of pieces that he had prepared for his grading exam later in the month, and I'm thrilled to report he passed!

My stage backdrop was a banner shown below that looked really nice, and was of course a nod in the direction of two albums of mine from the 70's PERILOUS JOURNEY and FEAR OF THE DARK. Thanks Dave for working so hard to create such a great evening at this outstanding venue in Derbyshire. 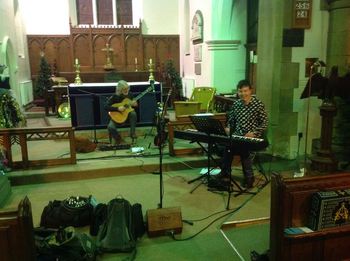 I love playing in churches it has to be said BUT it does somewhat present a challenge in winter when churches are by their very nature COLD. This was the case during my guest appearance with the superbly talented Adam Parrish on December 9th, the day after my Coopers Arms gig at his local church.

The evening was a mixture of solo pieces from Adam and a guest appearance by that lovely singer Marisa Johnson who is part of an ongoing duo with Adam. Adam did a superb job of accompanying me on many of my pieces old and new including HEARTSONG and DOWN THE RIVER, which for me was a special highlight to a lovely evening in which the music carried us and the audience through a very chilly concert.

Well done Adam, methinks we shall do it again sometime buddy. We are proud of you my friend. Huge thanks to your folks and everyone who helped make the whole thing go well. Jo the lady minister and her husband were particularly thrilled to have us play in their ancient and hallowed space. 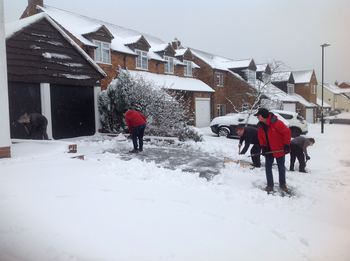 This was the scene that awaited us on our return the following day after my concert with Adam Parrish. I couldn’t get the car up the drive so was about to set to with a shovel when all these lovely folk turned out to help us clear the drive. What a great thing friends and neighbours can be. We are indeed very blessed to have such good pals.

My final concert of the year at Bramall Hall was special, not only for the fact that it had been over three years since I had played there, but also the events in-between made it that much more significant and poignant that I was treading their stage again. My young friend Ben Gorb was in attendance and we stayed over at the Gorb home after the concert. It was a joy to meet Ben's folks Adam and Liz. Adam is a respected composer and is head of composition at The Royal Northern College of Music. Our thanks to them for hosting us. 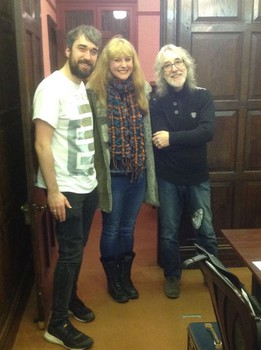 This is a very special photograph for me taken upstairs at Bramall Hall before my concert on December 14th. Here I am photographed with the beautiful Jessica Blaynee with her partner Phil. Her dear late Mum Linda was very special to us along with Jessica's Dad Colin. It was in Colin's home studio that I recorded my Elegy album and my Midnight clear album, along with a few others along the way. It was so great to have them at the concert.

This is another EBay purchase that I was drawn to because of the beautiful wood that has been used, also it being a 60's German guitar made it that much more attractive, knowing that it would have been a well-made instrument. When I bought it the beast was unplayable with a severely bowed neck and dodgy guitar tuners and awful plastic bridge. I believe it was made in the Musima workshops and is branded as a Nashville 12 model...Made in Germany. 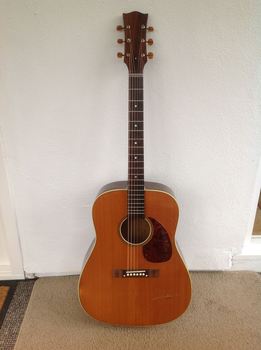 Look at it now superbly restored by non-other than my friend Steve Phillips. For those of you who don't know who he is, a good starting point would be to remember the iconic album cover BROTHERS IN ARMS from Dire Straits, and that beautiful National guitar on the cover. The guitar of course is the legendary instrument that Mark Knopfler used to record many classic Dire Straits songs including my favourite Romeo and Juliet. Well, that guitar originally belonged to Steve who sold it to Mark in the 70's when they were working together as a duo up in Leeds.

Since that time Steve formed The Notting Hillbillies with Mark and thereafter continued performing as a solo artist, alongside being an outstanding landscape artist, building superb guitars and establishing a guitar restoration business up in his home town of Fylingthorpe by Robin Hood's Bay. The man has talents in abundance.

For those of you who want their guitar worked on by a true legend and genius, then look no further than Mr Phillips who along with his beautiful wife Kate run the guitar workshop together. 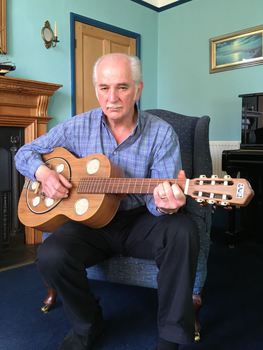 Steve, I can't thank you enough for your friendship and your incredible gifts that you share with us. You and Kate are very special.

Just Google Steve Phillips and all will be revealed about the great man and his regular Tuesday night FREE concerts at the Grosvenor hotel.

I love this picture of Steve Phillips taken by his wife Kate. Steve is playing his recently acquired Del Vecchio resonator guitar. You can tell he doesn't really like having his picture taken, not unlike many of us at a certain age. Bless him, and thanks Kate for persuading the great man to allow you to take it in the first place. I think he looks great. 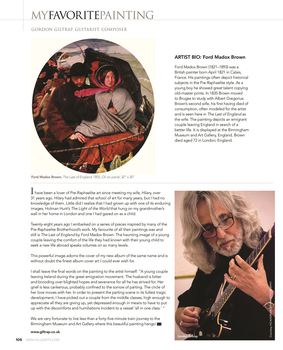 I am delighted that with the help of my dear friend Paul Polycarpu to have a page on the Nashvillearts.com website "My Favourite Painting" featuring the cover artwork from The Last of England album.

May I take this opportunity in wishing you all from Hilary and I all the best for 2018, with of course health being the most important thing in our lives which in turn we hope would equate to peace of mind.
G.