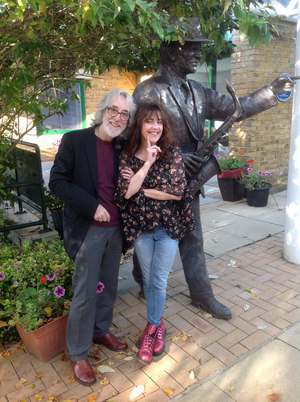 It has been a full calendar again since last time with a right mixed bag of things happening.

One of my all-time favourite venues in this country is The Stables Theatre in Wavendon. It had been a few years since last I had the privilege of playing on that stage, in fact it was with Four Parts Guitar in 2015.

Our dear friend Carrie Martin was my special guest on the evening, and this was without doubt a real buzz for her having never played a division one concert venue such as this, and she truly rose to the occasion, was warmly accepted by the audience and afterwards sold a complete box of her new album Seductive Sky. The three hundred plus audience were superb and welcomed me with open arms and afterwards I was signing albums and vinyl a plenty. Carrie joined me in the second half where we performed her song Holly Blue from her new album. A lovely memory and I look forward to returning there one day all being well.

On the 23rd of September we attended a book launch by my friend Nick Hooper whose self-published third novel was officially launched in the beautiful town of Woodstock at the Town Hall. 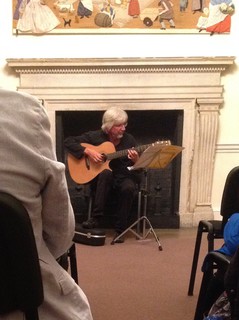 What made it slightly different is that we were treated to two superb guitar performances by the great man. The first being a beautiful rendition of a John Dowland piece followed by a tune called Above the Void which is the title of the novel. The gathering were delighted to hear this performance by a man who in a previous life before he became an Academy Award winning composer was a highly regarded classical guitarist, but these days he's a dyed in the wool steel string player who doubts that he will ever return to the nylon strung variety of guitar. On the evening he played his beautiful new Fylde based on a model that Roger Bucknall made for me quite a few year so back.

On Sunday the 29th of September I was invited to the annual conference for RGT, which stands for Registry Of Guitar Tutors. This event is held at The London College of Music in Ealing. I was there to give a Q&A on my life in music and my thoughts on teaching. I also played a few tunes along the way. It was quite a high pressure thing for me to sit in front of an audience of brilliant players and teachers holding forth about everything from composing to performing, but bless them they seemed to embrace my humble thoughts, acquired over donkey's years in the business. I was made a patron of RGT many years ago and it feels good to still be able to contribute something all these years on, in fact it's an honour!

Other Recent Gigs
There are three more gigs of note to mention. October 6th The Rope Walk in Barton on Humber, The Court House Otley the following day, and finally The Lancaster Festival, a workshop on the 14th and concert of the 15th. All three saw Carrie once again as my special guest and all three venues were sold out.

It would be so easy to say that all three concerts went well, which they did, but bearing in mind that I'm still easing SLOWLY getting back into performing, I never EVER lose sight of how lucky I am to still be able to what I do after the major health issues of the past two years, and also let us not forget that I'm two years older, so it truly is a minor miracle that I'm doing what I love doing so much and still getting a wonderful response from the audience. At this point in time I am truly blessed. Below is a lovely picture of Hilary - my 'Lancaster Angel' 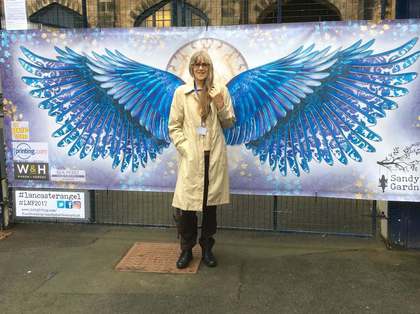 As I write this Carrie and I have one more concert to do in October in Hornchurch on the 27th, and I shall be reporting back on that next time methinks. I’m looking forward to that one because our beloved webmaster Sue Holton and hubby Mike will be in attendance and it has been ages since we saw each other. How lovely how music can bring people together. Once again it is a privilege.

I thought you might like to hear about the tour and Carrie's new album direct from the lady herself, so here is her newsletter.....

What can I say? I don't know where to start but I'm going to start I think with the release of my new album 'Seductive Sky'! Everything I've done this year has been building up to sharing this material with you all. It's now finished and I'm so proud to have special guests Elliott Randall, Gordon Giltrap, Oliver Wakeman and Daniel Karl Cassidy on it!

These new tracks are all inspired by things or people that have touched my heart so very much and they all have a very different feel and meaning to them .

Produced by Mikey Scott from Fruit Trade Music Hull and helped along by my friends Ricky Silvers of 'The John Palmer Acoustic Band’, Jamie Fowler from Damnation Hammer/The Frogg Brothers and not forgetting my very good friend Pete McLeod who added the Bodhran on 'Dancing Dragonfly'.

The album has been nicely managed by a full team, my manager David Michael Ward, photographer/graphics designer Laup Wilson and video guy Dave Carley of Kandle Voodoo who created the official video to 'Maria In The Moon' my first single from the album.

Maria In The Moon as many of you will have gathered is inspired by the book 'Maria In The Moon' by Hull writer Louise Beech www.louisebeech.co.uk, please see page on my site for more details !

Check out the video on you tube https://www.youtube.com/watch?v=sIqCa7VnxnM 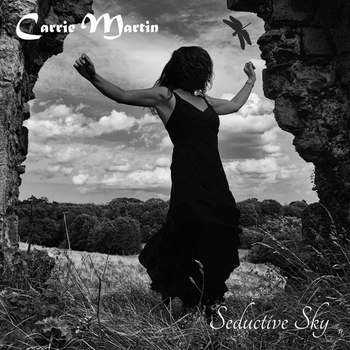 So gig wise it has been a fantastic year playing some of my favourite festivals, Filey, Tribfest and the added bonus of Lancaster at the end of this year!

A month playing in Ontario, Canada has left me totally buzzing and led to a lot of new friendships and contacts across the pond.

A huge thank you goes out to Rob and Carmen Taylor for welcoming me into their home and treating me like one of the family, I loved every minute of it. Canada made a huge impact on my heart and I'm sure I will be back soon.

Whilst over there I did a few demos in store with my Vintage GG2000DLX and my Viator at 'Long and Mcquade', 'Arts Music Store' and 'Music Pro' for Vintage/JHS. Spreading the Vintage Love

On the subject of guitars, something very special happened this summer when I became a very proud Fylde player! I went to visit Roger Bucknall, the finest maker of guitars at his workshop in Penrith, to pick up my beautiful Fylde Leonardo. I'm still blinking from the shock of owning such a beautiful thing!

Just when it can't get any better, came home from Canada to tour with Gordon Giltrap, my mentor, my friend, my guardian angel! I've been his special guest playing some amazing venues, touring all over with him and his lovely wife Hilary whom I am so very fond of (The track 'Paper Thin' is indeed about this very special lady).

The support from these two truly wonderful friends keeps me going!

The tour started before I left for Canada, we had fantastic gigs in Houghton, an amazing time at Chichester Festival (where the fabulous Mike Stranks recorded the live version of 'Holly Blue' for the new album) and The Kardomah94 in Hull.

When I returned home from Canada there was the thrill of playing The Jim Marshall Auditorium, The Stables in Wavendon which was a totally mind blowing experience. We then appeared at The Ropewalk in Barton not far from my city of Hull before going North West to The Court House in Otley, a lovely audience and time to catch up with bass player Ricky Silvers who kindly gave us accommodation for the night ! At this point I left the tour to travel north to Scotland for an intimate couple of gigs at The Wee Folk Club, Edinburgh and Star Folk Club in Glasgow, stopping off in between to visit two lovely friends of Gordon and a Hilary's in Dunfermline. Thank you Judy and Mike for your hospitality. 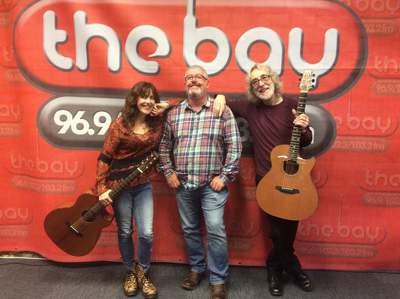 I met back up with Gordon's tour in Lancaster where we played to a wonderful audience at The Storey and an interview with Cooky on The Bay 96.9 Fm. I was away for ten days all in all, straight after landing from Canada, tired but absolutely loving it!

My thanks go out to everybody mentioned above, I'm so lucky to be surrounded by such amazing people! Once again Gordon and Hilary have been an immense support to me, guiding me and spurring me on in difficult times.

Thanks also to Phil White of BBC Radio Humberside, Rod Bez Grimmer of Hull Kingston Radio and Tony Haynes of FAB for their constant support and airplay.

Please do support my album, blood sweat and tears went into it believe me and you may get a few surprises when you check it out, all good though I hope

Thanks to you all

What a wonderful thing the internet is because via Facebook I have been able to sell more unwanted and pre loved guitars. This will make way for more instruments I'm sure but in the meantime it's a good feeling to know that they have gone to good homes.

The Last of England is still getting nice reviews, and because of the timeless quality of the music I truly believe it has a long shelf life, which is good because at this time I have no plans to record any more albums, and I truly had no plans to release another album after Ravens and Lullabies with Oliver Wakeman, having felt that I had pretty much said all I wanted to say musically, but how wrong I was!

You can read a few of the reviews HERE

My column continues next month with Pedrolino from the Under This Blue Sky album. Although this is quite an old GG composition it is still a challenge to play and has unusually for me a " jazz" tinge to it, obviously the remnants of my time working with a certain jazz guitarist! Do get a copy if you can because I think it makes interesting reading.

Please forgive several pics but it is interesting how this lovely old 60's acoustic was constructed. I bought it on the internet for not a lot of money and I think it deserves some TLC to bring it back to life. This is all solid timber construction and the flame maple of the back and sides are of superb quality. I may put it in the hands of a skilled person to truly do it justice. Made in the 60's in Germany in the Musima factory and called a Nashville 12. 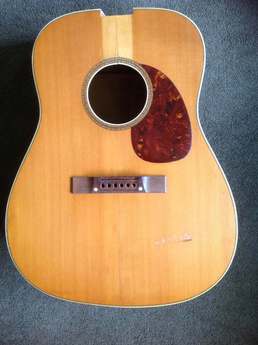 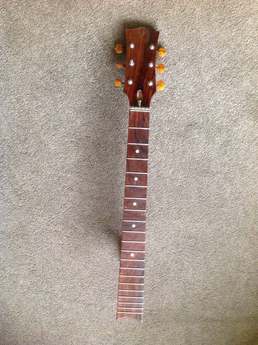 This neck has a clock key fitting to hold the neck on and to adjust the angle for a super low action.

I shall keep you posted on its progress. 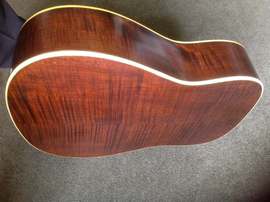 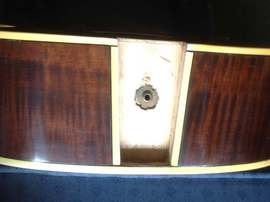 There is a nice little feature on me in the form of a Q&A in this month’s issue of Record Collector, for all you record collectors out there.