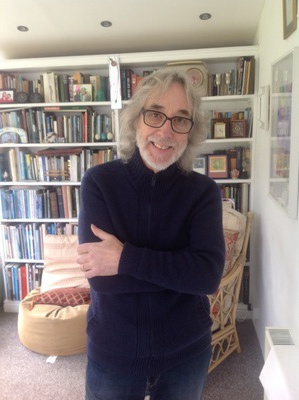 I put this pic on Facebook recently as a positive affirmation that I'm on the mend, and the response was truly lovely with numerous comments from friends and fans saying how well I look, which psychologically does me the power of good along with the Reiki I have been getting from some very special and gifted people.

"I'm delighted to report"........You have certainly heard me say those words so many times before, but it really is true this time because two instruments that I have helped create along with Hilary, have been chosen as possible candidates for this prestigious MIA award. You will remember that a few years back my Vintage GG 2000 was nominated and won acoustic guitar of the year. It would be fantastic if the Roger Williams instrument got the same this time round, and even more special if the GG D DAY Mandolin snuck in there. Watch this space.

I’m pleased to announce that we have a number of products nominated in this year’s MIA ‘trusted music store’ awards!

The winners will be decided on by a panel of judges this year, but it is still an important marketing tool, and testimony, to show off our nominated products to our customers. The awards will be announced on 24 November. 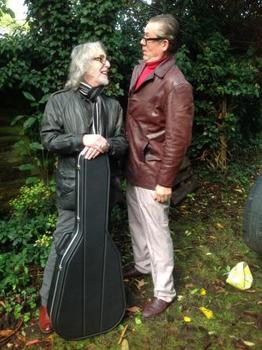 Earlier on this month I spent a fun day with Graham Fellows AKA John Shuttleworth at his home in Lincolnshire to record a fun version with vocals of my piece The Carnival that was written for Wish You Were Here. The song is called SUTTON ON SEA. It will be the final track on Graham's new album due for December release.

Graham is a great guy and commands a large and loyal following for his unique brand of humour. Many will remember his charity concert last year at the London Palladium where I was an invited guest and where we performed a version of the song together.

On the 28th of October Hilary and I attended a surprise party for Roger Bucknall to celebrate him getting the MBE. Moira his lovely wife had been planning this for about eight months and how the whole thing was kept a secret is truly a miracle. 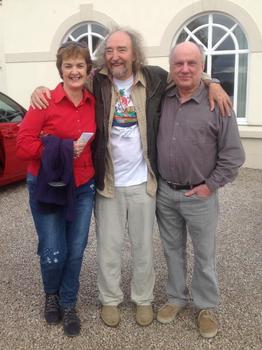 Roger's friend and photographer Mike English told the assembled company how the MBE was arranged and the process involved which took the best part of three years to come together.

I was delighted to see my dear old friend the legendary record producer Bill Leader and his wife Lynne sharing the evening.

I couldn't think of anyone more deserving of this surprise evening than Roger, a great craftsman and outstanding human being. Many of the artists (all Fylde players) had travelled a long way to be there. Eric Bibb for example had travelled from Sweden to pay his musical respects.

A huge thanks must go out to Rogers' remarkable wife and soulmate Moira.

It was a privilege to be there with my soul mate Hilary to share such a special evening.

Picture shows Moira, Vin and Roger the next day.

My good friend Paul Brett has asked me to pen or more to the point e mail a few words about me, my life, my views on music, composition and recording. This will hopefully be the first of many things I plan to write for Paul's online magazine to be called Guitar Ship and launching next year, so I look forward to it.

First of all a few words about Paul. I remember the first time I saw Paul at a pub in Hounslow called The White Bear with his band Paul Brett's Sage. I can still remember it like it was yesterday the impact that Paul's playing had on me that night and the quality of the songs and the show. Paul’s playing was full of energy and power and all executed on a lovely little pre-war Gibson. Truly amazing.

Over the past few years our lives have been firmly intertwined with our strong association with JHS and our signature guitar range. I have had many conversations with the man and he keeps relating amazing stories from his past history and at times I have thought "how is it possible that one man could have done SO much and have been involved with SO many legends”, but he certainly has, and I continually find out more astonishing things about him. He is without a doubt a workaholic and a true survivor and my respect for him and his beautiful partner Michele is immeasurable.

On reading this I know what he will be thinking. “This is supposed to be a feature on Giltrap not me”. These things have to be said and I'm proud of our friendship.

Now then on to what I'm up to these days. Apart from recovering from major surgery in May of this year I'm moving forward on many fronts including the completion of a new album due for release on Angel Air records next year. The album is a collaboration between myself and my friend the musician and sound engineer/producer Paul Ward. The album’s title is THE LAST OF ENGLAND which is the title of a Pre Raphaelite painting by Ford Maddox Brown, and forms part of a suite of tunes inspired by the movement along with other pieces written over quite a long period.

Next on the list is cracking on with my biography being written by Steve Pilkington who thought that my life story was worth documenting. What this means is that I have reached a certain age and have been in the business a long time and have in some strange way reached that " legendary" status that although is very flattering does not sit at all well with me which as a younger person I thought it would, but it doesn't! 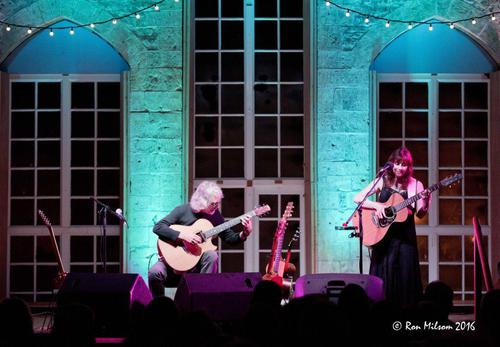 Very recently I played my first proper concert since last November at a beautiful venue called The Tithe Barn in Bishops Cleeve near Cheltenham. My good friend the wonderful Carrie Martin was my special guest and the audience loved her. When it came to my turn to tread the boards I was that nervous I was shaking before going on stage, and to be honest there were a few fluffs but I got through OK but enjoy it I did not because of the nerves!

One of the most important things in my life right now is teaching, and with the help of my good friend Garry Burnett and members of my first guitar weekend last September in Buxton, the GORDON GILTRAP GUITAR ACADEMY has been created to teach players my varied material built up over a long period. We plan to hold regular workshops throughout the year and for anyone interested in obtaining information contact Garry on 07512 842723 or go to www.giltrapacademy.org.uk e- mail giltrapacademy@gmail.com 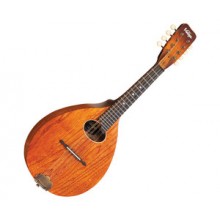 On to guitars now and instruments in general. My World War Two Vintage mandolin is selling steadily and this year will see the release onto the UK market my new Fret King GG Elise which will replace the first model of three years ago, also the Roger Williams designed electro acoustic classical will be out there for players who like steel string guitars but want to make that crossover into the nylon string world. It is a stunning looking instrument based on a steel string version that Roger made me quite a few years back. I can't wait to try it and have a feeling it will do well. There are a couple more GG related instruments coming out as well but as yet these are "under wraps".

I have been fortunate to play and own in my opinion some of the best guitars on the planet starting with the late John Bailey in the late sixties through to the great Roger Bucknall of FYLDE guitars in between and for many years the guitars of Rob Armstrong through whose association the GG range of guitars were created and represent the finest value guitars money can buy.

My main instruments these days are FYLDE's and of course the Vintage JHS series, and for electric work my Fret King Elise. I also have two very special gifts from two special friends Brian May and Pete Townsend. A Gibson J200 and an Avante short scale 12 string. I’m very touched by their kindness. For guitar effects I have a wonderful Line 6 Helix pedal which is an amazing piece of kit. 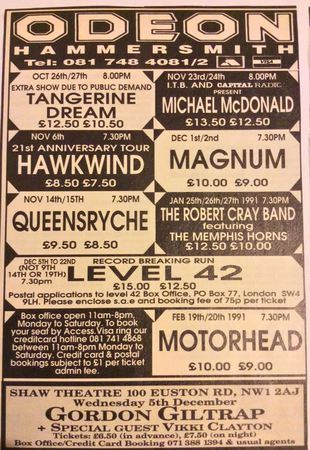 I remember the concert well mainly because the theatre was so cold, and on the way back the van driver was so tired he drove over an island just outside Coventry into a tree!

It was a good night though and I remember playing well and having Vicki Clayton as the opening act.