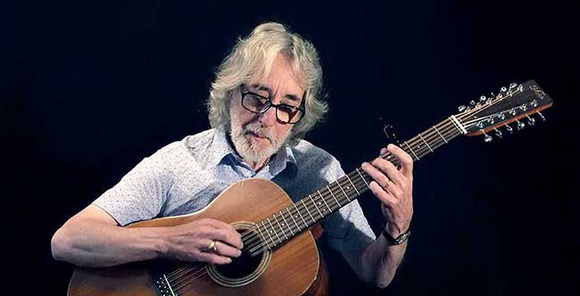 My private concert at St Michaels Church, Bishops Itchington arranged by my dear friend Martin Green was indeed very special. This was not a fee paying concert and admission was free by invitation only. The whole point of the evening was to get me back in front of an audience again after a lengthy lay off from live work due to my health problems and major surgery of nearly four months ago.

Well, it went very well and felt as though I had never been away, and the hell of recent times hadn't happened. It was lovely to see old friend Keith Meredith in attendance unfortunately not accompanied by his beloved Fiona who was elsewhere nursing a poorly Mum.

I have a long association with Martin Green and his lovely wife Louise going back over many years so it was very special to return and play again within the churches' walls. Since the last time I was there they have installed a cracking PA system with the speakers mounted up high in the ceiling producing a truly beautiful sound.

The evening was one of firsts because it was the first outing for my new HELIX FX pedal which I’m still getting used to, but it's an amazing piece of kit and sounded superb on the night.

There were about 50 folk in attendance and knowing that this was really a "recuperation" concert there was no expectations from me, just the fact that I was back doing what I was born and meant to do was I think enough for them. I think I played almost as well as "before" and received a standing ovation at the end.

I took just 4 instruments. My backup Appalachian Dreaming car boot guitar, my beautiful Fylde custom, a Viator travel guitar and a deluxe Vintage GG. All in all a special night for Hilary and I and here's to many more to come.

This month I have been invited to do a master class at the London Acoustic Show at Olympia on Sunday the 11th Sept http://www.londonacousticshow.com I’m really looking forward to it and the masterclass will be at around 10-30 for anyone interested in attending.

The following 2 news items are from the Fylde September Newsletter.

With thanks to Roger Bucknall MBE. Fylde Guitars www.fyldeguitars.com

John Martyn’s 12 stringJohn wasn’t known for playing 12 string - “There's only one 12-string that I've ever played that I really liked, and that belongs to a chick named Bridget St. John. She won't give it to me!”

That guitar was of course, a Fylde, and in 1979 John asked me to make him one. There is no trace of him ever recording with it, but it must have been well used, or at least ab- used as it was salvaged from a pile of stuff thrown out of John’s studio when he moved to Ireland. The tuners had been removed, the soundboard was badly broken, and the neck was damaged. It was stored again for several years before being brought to me about six years ago. The work involved was only justified because it had belonged to John. I fitted a new neck, and we put the soundboard back together as best we could. It’s an Orsino, very light and responsive, not at all like other twelve strings at the time.

Then I had a brilliant idea. Before I returned it to its “owner”, I would get somebody to record with it.

Gordon couldn’t have been happier about the idea. He travelled especially to Mike English’s house to make this video,

“I just loved playing it, and how it ended up in a skip is beyond me! The instrument had matured with age and played superbly and like all FYLDES it rang like a bell. The piece I chose to play on it is an old favourite utilising a partial capo and is entitled SHINING MORN.”

It has all worked out so well. Thanks Gordon. Thanks Mike. Mike's site

Pete was in touch recently, needing two new guitars for his upcoming acoustic shows with The Who.

He already has three Ariels. Within a few days, he will have five!! The two new ones are not identical- one has Mahogany back and sides, the other is Sapele, which hopefully will give him more choice for particular songs.

"----I am still composing guitar music and am always most inspired when using one of my three fabulous Fylde Ariel guitars. You’ll remember that one of them dates back to the late ‘70s.--- for me the guitars are a constant reminder of what you do, and I’m so proud you work in England. …...my Fylde guitars are like members of my family – always inspiring in a creative way, always alive and sparkling".

Pete is a big fan of Gordon Giltrap and he talks about him here: 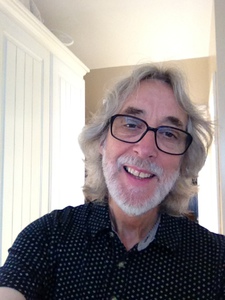 I'm well and truly on the mend and don't want to focus too much on the health situation and in all honesty don't want to tempt fate. I’m not completely out of the woods yet but am determined to get on with things.

A huge heartfelt thanks to SO many friends and well-wishers I truly don't know where to begin. I have been posting occasionally on Facebook and I know that many are on FB these days and would have seen them. 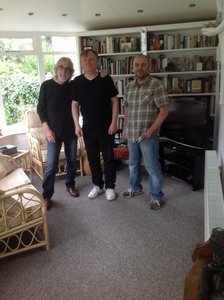 I'm thrilled that in the next issue will be an in depth interview and photo session and will be on the front cover! It great to know that I'm still valued and that folk haven't forgotten me.

The picture to the right shows me with David Mead and the photographer.