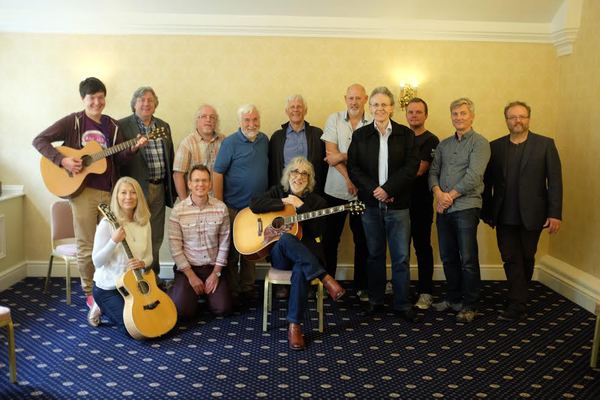 My very first GG guitar weekend in Buxton was without a shadow of a doubt a successful and emotional gathering. The eleven students were told well in advance of my current state of health, this was well before I went "public" on Facebook and Twitter three days after the weekend.

When I had been diagnosed with this cancer/ tumour I truly thought I would have to cancel this event along with the handful of remaining dates up until Christmas. Fortunately I have been put on tablets that target the tumour for a period of three months thus allowing me to fulfil commitments. This weekend was more important to me than anything else.

There were originally twelve spaces booked but sadly two students had to pull out, one with health issues the other having to look after a poorly relative. Fortunately one of the places was filled at the last minute.

I chose The Old Hall Hotel as a venue because my friend Woody Mann has held his superb blues guitar workshops there for some time now. He highly recommended it for its lovely location, and the teaching spaces were just perfect. This isn't to say that for future workshops this venue is set in stone...it isn't. There has been a suggestion for a more central location and I shall certainly bear this in mind.

The big question that many people have asked me over the years is "why haven't I held a weekend such as this before now". The answer may surprise you but it was purely insecurity. I felt that not being a trained musician with a solid knowledge of theory I couldn't do it. I have of course given many one to one lessons here at home, but the thought of doing a whole weekend I found very daunting. Obviously as time has gone by I realise how ridiculous this argument is. Mainly because after fifty years in the business I have built up a body of work which many players want to play.

I guess in my own way I have created a school of playing that draws its inspiration from Bert Jansch and John Renbourn, with just a dash of Pete Townsend along the way. HEARTSONG and LUCIFER'S CAGE being perfect examples. Since those early days many players like myself have come under the spell of those great players, and we are all standing on the shoulders of giants!

My good friend Garry Burnett was on hand to help share the load and without him I doubt I could have coped. He brought along virtually every piece of GG TAB and music he owns, and created some lovely certificates to mark the event. I signed each one, and all were thrilled to receive them.

Friday evening was kicked off by a meet and greet and a chance for everyone to get to know each other. One of our number Mark Guyatt treated us to a potted history of his musical journey with the guitar playing superb versions of Paul Simon pieces and a Fleetwood Mac piece. Tony McNulty who had attended a John Renbourn workshop in Crete a couple of years ago showed us some snippets of John's superb compositional gifts and outstanding technique. At the end of the evening I presented each of the students with a Travellers CD that featured myself and Paul Brett playing our Viator guitars.

The rest of the weekend went superbly well although the assembled were told that I may have to slip away for the odd nap, which I did after lunch on Saturday. I shan't give chapter and verse on the remainder of the weekend, but just wanted to say how genuinely excited I am at the prospect of devoting much of my time in the future (once I'm on my feet again) to teaching. It is wonderful to do concerts, and worry not there will be GG concerts, but passing on my knowledge and my music is truly my legacy.

My final and heartfelt thanks go to my dear friend Garry Burnett for "keeping the faith" all these years and for helping to make this little dream come true. Thank you all for making this my first journey into guitar weekends so easy for me.

This is the now future for Hilary and I.

I only wish I had done it sooner!

You can read the reviews HERE but I think my favourite quote so far has to be this by Gary Winterman: 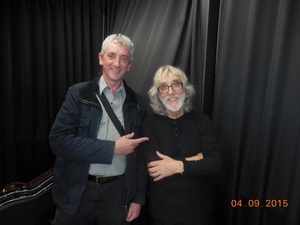 On the 4th of this month I played at a relatively new venue in Hornchurch called Fairkytes Arts Centre.


This was the second concert that I felt comfortable enough to share my current health issues with the audience, and you know they were fine, receptive, and wonderfully sympathetic. It was a sell-out concert with a fine duo (vocals and guitar) as the support.

I can't thank the organisers enough for looking after me so well, and after a brief nap before the concert I was ready to go and fortunately all was well. Because of my current situation I never assume or know how well I will be able to perform like my old self. My main problem is fatigue so I have to pace myself a little more, but we got there in the end. 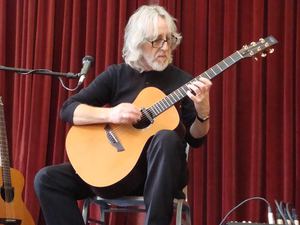 I could not have wished for a better turn out at this MS fund raising event. Malc Welch was on hand to help out and both he and Karen Boulton did a fantastic job in organising the event, creating a nice programme for the evening and along with friend Christine (who provided wonderful sandwiches and scrummy trifle for dessert).

The Jubilee Hall is part of the Town Hall and what a beautiful building it is with outstanding stained glass windows.

Great to see two friends from the Buxton weekend there Gary Winterman and Mark Guyatt. Also lovely to see another Gary, this time Hudson, and the lovely Lorraine in attendance also. My friend John Fradley was there who wrote this short review of the evening.

In this era of celebrity culture it is difficult, if not impossible, for many people to separate the excellent from the truly great.

No one present in the elegant surroundings of Stoke's Jubilee Hall last night were in any doubt that they had witnessed the stagecraft, of an artist of genius.

Gordon Giltrap is a musician who commands the respect of artists worldwide and his performances take the acoustic guitar to another level.

I have been privileged to have witnessed many of the world’s finest performers over the last 50 yrs, from Aznavour to Oscar Peterson, Sinatra to Michel Legrand, John Scofield to Robben Ford and many more.

Giltrap resides within that elite.

A goodly sum was raised for this worthwhile charity. I believe a figure of £700 plus was raised on the night but methinks that figure could be higher. I shall get that info in a few days from Malc. (thanks to Malc for the photo)

I couldn't believe it had been almost five years since I had played a concert for them. How scarily does time fly.

Upcoming dates are of course on the website and I'm very much looking forward to them, and delighted that I'm able to do them. 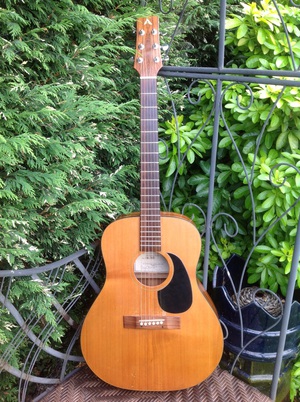 The guitar this month is probably the most significant and emotionally charged instrument that it has been my privilege to own. The reason I say this is because the guitar was gifted to me by the family of the late and deeply missed Loren Jansch.

The name Loren will be known to regular readers of these pages, as this is the title of the heartfelt piece I wrote in memory of this remarkable woman.

This guitar was owned by my friend and guitar legend Bert Jansch who used it as one of his main recording guitars since Rob Armstrong made it for him in 1988. Needless to say it sounds very special and it has already been used on the piece I wrote for his late wife, and made an appearance on the 4 Parts Guitar CD.


To be the custodian of such a special object runs very deep with me. When I first got the guitar it hung on my music room wall, but after a while I felt it needed to be respectfully kept in a case, which I purchased especially for it. So that is where it lives until the time is right to record with it once more on a piece that I feel is right.

It has given me great pleasure to share this with you at this significant time in our lives right now.