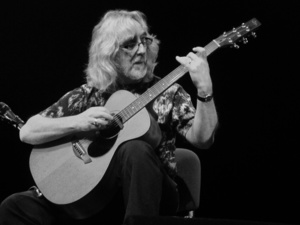 This time of year is usually quiet gig wise so not too much to report on that front apart from my evening at The Hinckley ACT at the end of the month.

The club is run by Pam London, the widow of the late Keith London who started the club a few years back and she does a fantastic job of keeping it afloat. Pam even does the sound for visiting artists and what a great job she did on the night I played there. The club is almost like a small theatre and holds a maximum of about 60, creating a warm and intimate atmosphere.

I was pleased with my performance and was doubly thrilled to have family members there along with old friends Malc Welch and his lady Karen who did the merchandise for us. Lovely also to see Rob Armstrong's partner there Sheila Rigg who we hadn't seen in a couple years, a lovely person.

Keith Meredith was there minus Fiona (she of Fiona's Smile) so it was a great opportunity to play that very piece. You can read Keith's superbly written review here...

As I drove alone towards Corby on a dark, clear night- a full moon seeming to match my progress – I reflected that perhaps this lunar influence was contributing to my elated state. The conclusion was that it was more likely that I was closer to home and my Beloved as each minute passed; and that attending a concert by one Mr. G. Giltrap had elevated my spirits.

I had heard of the Hinckley ACT but had never visited. This must be a unique venue. Situated on a business park just off the A5, the site is by day an engineering business – Advanced Carbide Tooling. In the evening an adapted section of the building provides a full stage, complete with lighting and a quality sound system, and seating for an audience of about a hundred music aficionados. Very efficiently managed, the relaxed and friendly atmosphere was – for me – enhanced with some excellent aerial photographs of historic aeroplanes

It was great to see the merchandise table in the capable hands of Malc and Kaz, who had undertaken the trek from Stoke on Trent despite being involved with the stresses of moving into a new home. Furthermore I was delighted to make the acquaintance of Gordon’s son, Jamie, and his ‘significant other’, Karen – with whom I sat – together with Hilary - throughout the performance.

The audience was enthusiastic and appreciative from the start, and warmed to both Gordon’s virtuosity and laid back, self-deprecating style immediately – and this response encouraged our Troubadour to produce an outstanding performance.

The set list included: Shining Morn, Loren, Here Comes the Sun (which, thinking about it, should have been dedicated to Jamie), a stunning Dodo’s Dream and a note perfect Fiona’s Smile. I also enjoyed the less often heard Rachel’s Reflections and the commissioned ‘work in progress’ dedicated to someone’s cat. We were despatched home in the customary boisterous manner with Heartsong and the energetic Lucifer’s Cage.

During the interval, I was ear wigging a conversation between Jamie, Karen and a very amiable local gentleman. This fellow was full of praise for the quality of Gordon’s musicianship and his gift for composition – but I had to repress a wry smile when he asked, “Have you seen him before?’ Alas he didn’t realise the relationship until the concert was nearly over.

Once again the skill, digital dexterity, and prodigious talent of Gordon Giltrap has gained him further enthusiastic devotees.

Notwithstanding the deceptions or angst that life may have in store for you – music itself - particularly Gordon’s music - is not going to let you down. 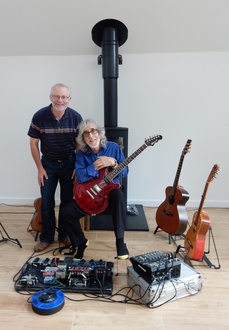 I did a private gig in Truro on the 25th of July for two lovely folk, Ian and Maria, celebrating moving into their newly built home in the Cornish countryside. You can read their thoughts on this special evening and my performance here, below is a quote from one of their guests:

"We thought the whole thing was brilliant, inspirational and an absolute treat to hear and watch at close hand Gordon performing his magic on his numerous guitars sprinkling the fairy dust that only musicians at the top of their profession can provide."

By the time you read this I will have played a return concert at the Guildhall Portsmouth in their studio theatre. Because of the distance, we will travel down the night before and stay with our good friend Sue Martin thus making the journey that much easier. I must confess that all this travelling is beginning to take its toll on me and thoughts of cutting down have been looming for some time, but worry not I shall still be treading the boards (good health allowing) for a while to come. 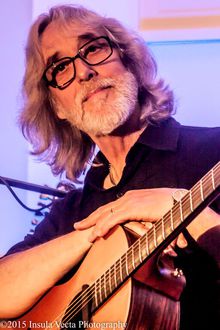 This was my second appearance at this delightful venue and I truly could not have wished for a nicer more responsive audience.

It was interesting because the venue is a large Cafe style room adjacent to the main and HUGE Guildhall, a venue that I had played during the glory days of the late seventies when I had such a following that I could indeed fill out venues of such magnitude! BUT times change and things move on and the important thing is to move with them in as best a manner as possible.

I was recounting to the audience that very fact and I made a tongue in cheek remark about
" how the mighty had fallen" which indeed raised a smile, and was quite ironic because quite a few folk had brought along their precious vinyl for me to sign. Perilous Journeys and Visionaries abounding!

At the end of the evening after my usual Lucifer's Cage there followed a standing ovation, quite a common occurrence these days I'm delighted to say. I hope this isn't out of pity....grin.

Good to see friends Shuri, Roger and Em of "Em 's Tune" and finally Andy Smy at the show. Andy had travelled four hours from Barnstaple to see me! I thank him for it, and truly appreciate that kind of friendship.

We sold quite a few items for our charity and raised £40 which was so generous.

A keen amateur photographer, Ian Foss, travelled over from the Isle of Wight to take some live pictures of this ancient Troubadour as well.

All in all a memorable evening. I wonder if I will ever fill those large venues again, it's maybe not too late at 67! 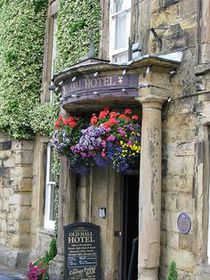 September 11th, 12th and 13th in Buxton is fast approaching (now there's a title for a piece!) and I am so looking forward to my first ever guitar teaching weekend. We have 12 places booked by players who have attended my concerts and one or two who haven't. I just want this to be a special sharing weekend of music enabling me to pass on any knowledge that I have acquired over the past 50 years in the business.

There is a nice four star review for Wolfscote's debut album "Turn the Glass" in the Telegraph as one of their top Folk albums of 2015.

You may remember that I played on two tracks of their album, sadly the one that I was most pleased with was indeed on the album, the lovely track Tender but minus my contribution! Three of the band loved what I did but were obviously overruled! Hey ho.

You can view the live version that we did at Skegness last December on Youtube to hear my original guitar arrangement.

I have for MANY years now toyed with the idea of a biography. Well, the time is now right. The chief scribe for The Classic Rock Society, Steve Pilkington, approached me months ago with the desire to undertake this mammoth task. In fact it was just after the CRS Awards night where I was honoured to present the awards.

I'm looking forward to it in many ways and it will I'm sure resurrect good and dark memories during certain episodes in my 67 years on this earth. It will be a cathartic experience and one I'm prepared to undertake. The working title for the book will be PERILOUS JOURNEY. We already have interest from a publisher so we shall see what happens. This book could take a couple of years to write and will be no easy read in parts but that, I think, is what makes a biography interesting to read. Watch this space my friends. 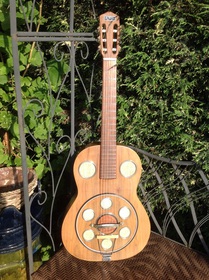 You may remember a time back this guitar, gifted to me by my pal Paul in the States. Well, it has been restored and sounds truly rich and lovely. The man who worked on it Chris Siddell spent on and off about six months restoring it, creating a new bridge and tailpiece among other things.

These guitars were made up until the late 60's I believe and were quite crudely constructed but had a sound like no other. It was the late great Chet Atkins who personally discovered their unique sonic qualities and made them famous if you like. You can see Chet playing one on Youtube and it sounds divine. All being well I’m sure I will find a place for it on a recording at some point in the future. 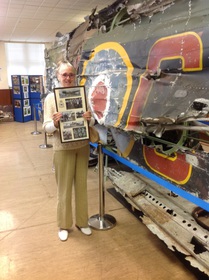 A few weeks ago Hilary and I were invited to RAF Waddington to their Heritage museum. Hilary was donating a group of photographs to them and in return we were giving a fantastic guided tour by a wonderful gentleman named (would you believe) Christopher Dean.

We had a wonderful time looking at some very moving exhibits relating to Lancaster bomber crews who had died in combat or on landing back in the UK after bomb runs over Germany.

During one of the chats that Hilary had with Chris, it transpired that he knew who I was but wasn't going to say anything at the risk of embarrassment. It turns out the Chris is a keen guitarist with a small collection of guitars, one being a prized Gibson Les Paul. So, time was spent in guitar talk which you all know I just love.

Here are a couple of photographs, one of Chris and I and one taken on an aircraft when he was an active serviceman.

A nice day all round and a nice man to have met. 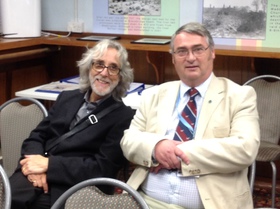 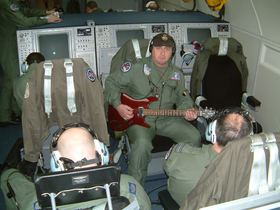 Chris wrote: It was a pleasure to show you all round today: it is not often that I have the opportunity to talk Lancasters and Guitars within the same session!!! If I can be of any help in the future then please don't hesitate to ask.

I have attached a photograph to show the odd places that my Ibanez has been played - this on a transit in an AWACS from South America back to the UK.

My DADGAD column continues this month with The Racer, next month will be Rachel's Reflections followed by At Giltrap's Bar. I hope to continue writing more for them in a slightly different vein in the future, featuring some of my special and historic guitars.

I can't say too much at this point but John Hornby Skewes ( JHS ) have plans to release THREE more Giltrap signature instruments in 2016. I have seen the prototype for one of the guitars, and it's truly stunning. Details to follow......

There will be more interesting and riveting news next month I promise you.