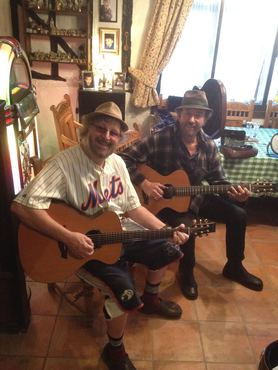 I'm delighted to report that Chas and Dave are now both official endorsees of Vintage guitars and in particular my signature deluxe model which they both love.

I met Chas Hodges at the Palladium concert and he seemed much taken by my guitar, so much so that he bought one, he then turned Dave onto them and the end result is this cracking photo and video snippet below.

To tread the boards of the legendary London Palladium should in any artists books be a privilege, as it was with me on the 28th of last month. I was part of what can only be described as a musical variety show. And what a show it was.

Graham Fellows aka John Shuttleworth has been a huge cult comedy figure in the country for quite a while now and to be invited to be a part of this fundraising concert in aid of MS was indeed a profound pleasure and a night to remember.

The line-up which included Sooty and Sweep, Chas Hodges (from Chas and Dave) as well as Toyah, Bill Bailey, John Ottway, and Badly Drawn Boy did indeed make a heady cocktail of entertainment. There were other names on the bill also so forgive me if I don't remember them all. Chas and Dave are now proud owners of my Vintage signature acoustic guitar featured elsewhere in the news page. 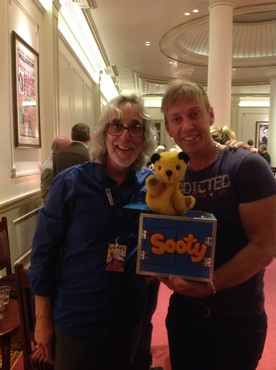 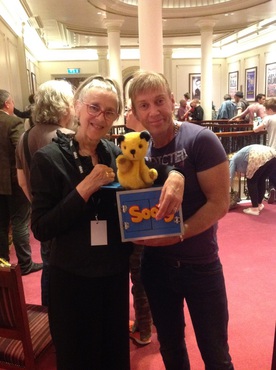 My part in it all was as a guest of John Shuttleworth and to perform a vocal version of the "Wish you were Here" theme (The Carnival) written years ago for ITV's Holiday Show, and to also open the show with Heartsong and a snippet from the World Bowls theme. It was nostalgia all the way and the audience loved it. I made an appearance in the band in the second half performing “Gordon Is A Moron” with Chas on bass and John Ottway on backing vocals (spoken), with Graham in the guise of Jilted John. This was all seat of the pants stuff which in reality is the essence of the Shuttleworth humour and presentation. 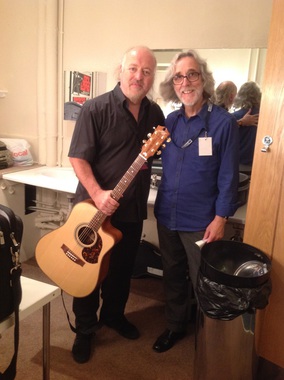 For me the highlights of the night were meeting Bill Bailey that comedy genius and a truly nice man, also sharing the dressing room with Chas Hodges and various guests was lovely apart from someone who shall remain nameless who could have spoilt the whole thing backstage and onstage with his disgraceful behaviour and foul language in front of a mixed family audience.

There were shouts of "get off" during his set which culminated in him kicking his drink across the stage along with a two grand Gibson J45 guitar smashing it virtually to pieces. Fortunately it didn't spoil the show too much although several audience members left the venue in disgust. Graham had to apologise for the man’s behaviour in his usual comic fashion by saying that maybe he was "fed up because he didn't win the raffle."

I personally think that people like that abuse the privilege of being in the business and should be ashamed of themselves. God, people like that make me so angry! Anyway no names mentioned here except his stage attire consists of permanent head
attire of a thick woolly hat! 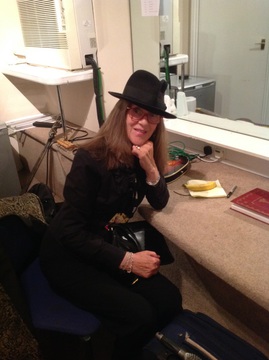 It was a joy to see my son Jamie with two of his pals in the front row grinning from ear to ear. They had bought their tickets weeks before the show and loved every minute. Other friends of note in attendance were... Iain Carnegie, and Trevor and Olivia Nurrish.

The after show party was lovely and great to meet a few more nice people, including members of Graham Fellows lovely family. I believe a goodly sum was raised for the charity, and it gave Hilary and I a night to remember, including Hilary wearing Chas Hodges hat!

I do hope you enjoy the photographs.

My annual appearance at the Swanland Festival was once again an utter joy. Swanland village is SO beautiful, and my dear friend Garry Burnett always goes the extra mile to make the evening special. My special guest of the evening was the lovely and brilliantly gifted Carrie Martin, who delivered a stunning performance. Carrie just goes from strength to strength with her song writing and outstanding vocals. Her new album “What If” is about to be released on Trapeze records and available via Amazon.

My thanks go to Garry, Carrie and Mikey for a great sound. Here's to next year eh folks.

A very rare appearance with Raymond Burley at Cheddar made for a pleasant and enjoyable evening. The 120 strong audience was lovely and receptive to our low key approach to guitar duets of classical and steel strings. They were so patient when it came to my constant re tuning but the humour of the evening carried the whole thing well. 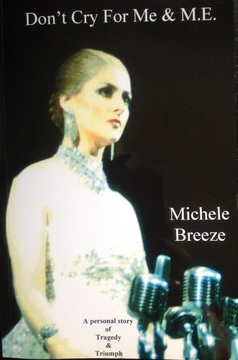 I am currently reading a remarkable book written by Michele Breeze, one time West End star and daughter of the late and legendary Alan Breeze.

Michele was struck down by ME many years ago. This book tells her story and would be invaluable reading for anyone who has this terrible debilitating illness or knows someone who has it.

Superbly written in a deep heartfelt way, this book has many levels of understanding. It has spirituality and compassion, and is in many ways a code for how to live your life and focus on what is truly important.

This can be quite a harrowing read, but is full of humility, understanding and hope.

I can highly recommend it, and is a superb aid to those poor sufferers of this little known illness.

To get a copy and get more information go to www.michelebreeze.co.uk. You can also pay by PayPal.

You can pay by post and the cost is £9.99 Cheques payable to FRETDANCER.

Don Maclean a name some may remember from many years ago of Crackerjack fame is a member of the old boys club related to the sadly now gone Bell and Pump folk club in Birmingham.

He has asked me to pen a few memories for a book he is putting together on the history of the club, and I thought this would be of interest to OUR readers.

It must have been the early seventies when I made a trip up to Birmingham to do a gig at the legendary folk club The Bell and Pump. My memories of that night are very vague now but I think I went down well and afterwards stayed with a cousin who lived in Shirley.

We then move forward in time to 1985. I had moved up to the area as a single parent and was booked to play a solo gig at the Guitar Club held at the venue. It was an interesting evening, and it was there that I met a very attractive woman called Hilary who was helping out selling the raffle tickets. One of the raffle prizes was my Peacock Party album. Low and behold Hilary won the album and that was that, or so I thought.

I then attended the club several times on their guitar evenings and would be there with my pal Ric Sanders the fiddle player with Fairport Convention. On one particular evening in early 86 Ric and I turned up to support one of their resident guitarists who was doing his first solo gig, and guess who was there that night...you guessed it, Hilary.

Nearly 30 years later we are still together. So you see that venue holds special memories for me.

I loved the place and the whole atmosphere of the venue with its long history as a club that attracted many artists that later became huge stars in their own right. One name stands out and that is the lovely Barbara Dickson who performed there at the start of her career. I remember a collage of past artists in a picture frame proudly displayed on the club wall and there amongst them was a young Babs!

Other artists I had seen perform there were Don Maclean, Malcolm Stent, John Renbourn, Derek Brimstone, Martin Taylor and many more. We shall never see the likes of this legendary club again where I met the woman who changed my life that night in 1986. 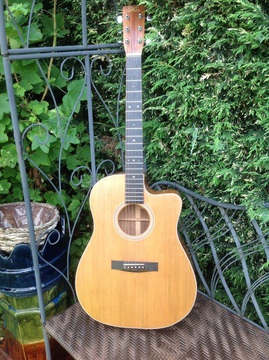 This guitar has a huge GG history attached to it. Made in 1977 by Roger Bucknall and gifted to me in the same year. I used this guitar to record Heartsong and much of the Perilous Journey and Fear of the Dark plus the Peacock Party album.This guitar has finally come home to me after being on loan to the late great James Herbert. The guitar stood by James' desk for many years and in between writing chapters he would pick it up for a strum. I said it was on loan until he bought a Martin guitar that he had promised himself for years, but to my knowledge he never did.

It was a very lightly constructed cedar topped guitar and believe me it sounded fabulous. Sir Cliff played it and immediately ordered one from Roger and played it solidly for many years as his main acoustic guitar for solo appearance and on stage with the band.

Eventually because of its light construction (my idea not Roger's) it eventually split and fell apart. At that time I don't think Roger was in a position to replace the top so another maker did the job. It never did sound as good as the original, but I have to tell you that since getting it back and giving it some TLC believe me it sounds lovely, and although I was tempted to get it back to Fylde for a replacement top, I think I shall leave it as it is because the guy had done a good job and it would be a shame to ruin it's very recent and for me important history.

I hope that it gave James much pleasure over the years he borrowed it, but it is now back with the current custodian. All these lovely guitars I own are just here until someone else will enjoy them for many years to come.