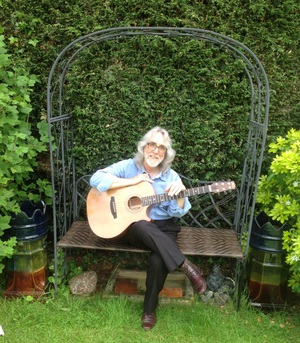 Been a quiet one this month so Hilary and I have taken advantage of the time to visit friends and family in Dorset and the Lake District, the latter being to return a guitar and to collect my wonderful and new Fylde custom Leonardo guitar from dear friend and master guitar maker Roger Bucknall, but more of that in a future NEWS page.

This one features reports on two concerts, one public and one private, along with the JHS EVENT, plus a feature on an intriguing little guitar. Also the 4 Parts Guitar session for Bob Harris. 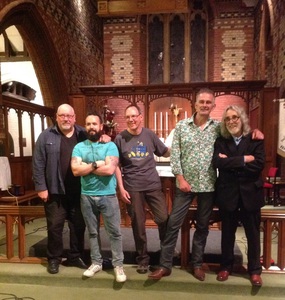 This was my second appearance at the venue and my special guests were Jump an acoustic prog rock band who were in fact playing one of their rare stripped down shows. The last time I saw them was when I was presenting the awards for the Classic Rock Society early on this year and it was great to share the evening with them and what a nice bunch of fellas they are.

The audience were lovely and it was great to see Keith and Fiona Meredith in attendance. I love having them at my concerts as it gives me the chance to dedicate Fiona's Smile to the lady in question.

Photo right with Jump and David the organiser at Fenny Stratford

JHS celebrate 50 years in the business this very year 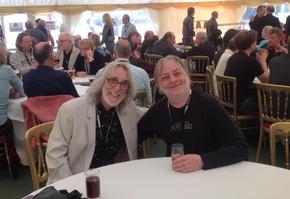 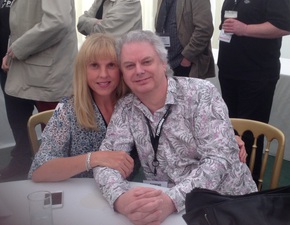 Here I am with the legendary guitarist Elliott Randall, who composed one of the most memorably guitar solo ever on Steely Dan's Reelin In The Years. A lovely man and good friend.

The Burleys at Event 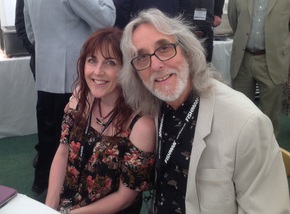 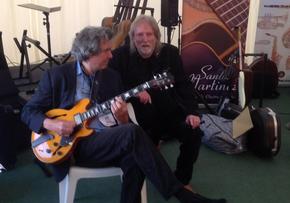 The great John Etheridge with Paul Brett at Event 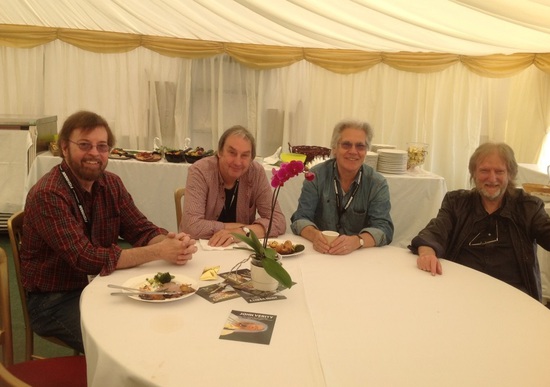 Colin and Gillian McCormack are two of the nicest people one could wish to meet, and it gave Hilary and I great pleasure to share their 30th anniversary evening at a local Rugby club not far from Garstang in Lancashire on Saturday the 13th of June. 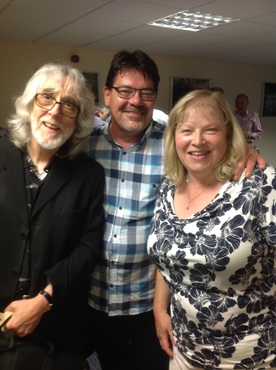 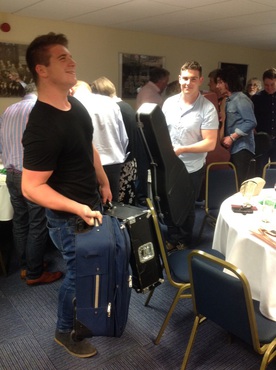 The small but appreciative crowd were a joy to play for. I took my usual small PA system (which is a rarity these days as I only use it for occasions such as this having made the decision that I'm too old to be lugging gear around at my age) which suited the room perfectly and to have on hand a host of roadies was a luxury!

As you can see by the photographs a fun time was had by all. Hilary and I wish them both many more happy years together.

One room, 34 people, one night of sheer magic!

This month, my wife Gillian and I have been married for 30 years and we wanted to mark the occasion with something a bit special. Having seen Gordon playing one of his ‘village hall’ gigs last October, we both walked out of the venue afterwards, looked at each other and said ‘That’s it’!

Eight months of intense anticipation later, last Saturday Gordon came to Preston to play a private gig for us, our closest family and best friends.

With an age range of between 19 and 83, the entire audience was spellbound as Gordon played two sets for us, each song interspersed with chat, anecdotes and jokes that created such a wonderful atmosphere. You see, the thing about Gordon is, not only is he an incredibly gifted guitarist, he’s such a completely bloody nice bloke - and that shone through throughout the evening.

His first set ended with the totally mesmerising ‘The Dodo’s Dream’, the second with an amazingly energetic ‘Heartsong’ with ‘Lucifer’s Cage’ coming as the Grand Finale.

As many of our guests said at the end of the evening, it was a night that we will never forget. 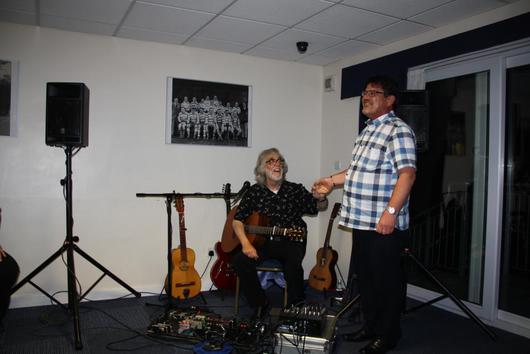 I asked my eldest son, Jonathan, to add a comment, here’s what he said:

Gordon is an unquestionable genius on the guitar, but also understands an audience. His gentle, witty manner and clear love for what he is doing shines through as much as his playing.

He spent the interval chatting to the audience, swapping stories and meeting and greeting and was happy to talk to everybody.

But ultimately, it is about the music and Gordon is a remarkable guitar player. With just a small selection of equipment, he can produce a lot of magic. You won't be disappointed.

I’ve seen Gordon play to larger audiences a number of times, but nothing compares to the excitement and intimacy of having him playing for you in a room with just a small group of people in it.

So, my advice to any of you out there is this: if you want a night of exceptional guitar music that you will always treasure, then do what we did. Getting married? Big Birthday? Special celebration? Just fancy a stormingly good evening’s entertainment? Then book a Gordon Giltrap private concert – I promise you that you will be glad that you did!

To Gordon, and your lovely wife Hilary, thank you for making our special occasion such an unforgettable experience!

On Monday the 22nd of June 4 Parts Guitar all met up in Bob Harris's studio in the grounds of his home in Oxfordshire to record a session for Under The Apple Tree.

This session can be seen and heard online shortly, details to follow.

We recorded "live" Maddie Goes West and A Dublin Day each on the second take.

I used my brand new magnificent Fylde custom Leonardo for the session.

A most enjoyable day with Matt Myerscough-Harris engineering the session. What a joy to spend quality time with Bob's lovely wife Trudie a very special lady. 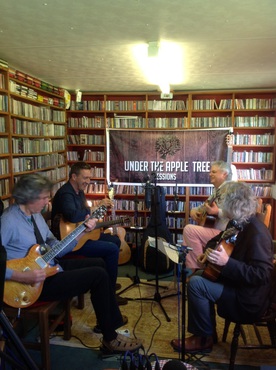 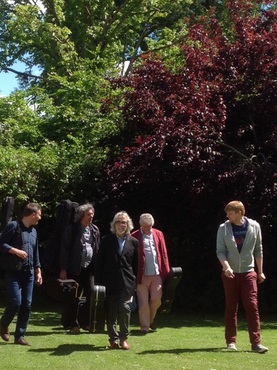 Here we are recording and returning to the main house after a cracking session. Matt our engineer on the right. 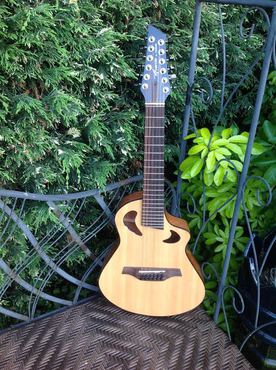 It is on loan from a friend and as yet I truly haven't got round to fully exploring its potential.

My good friend Paul Brett owns several of Joe's guitars and has been raving about them for some time. This one is made in the Far East and has a lovely tone and an intriguing sound amplified.

I just love instruments that can be tuned higher than concert pitch to create an ethereal harp like sound, and this little gem has it in abundance.