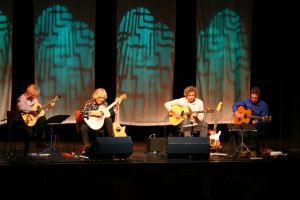 Dear friends, the main bulk of the news this month will be the remainder of the 4 Parts Guitar UK tour. Having been in this crazy business for almost fifty years I cannot remember such a fun filled time as being on stage with Raymond Burley, Clive Carroll and the ubiquitous and amazing John Etheridge.

I truly never planned for these shows to be such great fun with an overriding sense of spontaneity but fun and spontaneous they truly are. This quartet has just grown in stature with each concert to the point that each and every night there has been genuine standing ovations.

I will never forget as long as I live our Calstock Arts concert where none other than the great John Williams made the trip over from his holiday home in Boscastle to see us. John Etheridge and JW have been good friends and musical partners for many years now, and John had dropped into see him that afternoon and had (unbeknown to us) invited him to the concert.

You can imagine how we felt when he told us that J W was coming to the show! To be honest JW was never a direct influence on me as a player, so I thought I would be fine knowing he was in the audience. Well, nerves did kick in a bit for all of us during our solo sets in the first half having the greatest classical guitarist in the world sat in the audience.

During the interval he came to meet us in the rather cramped dressing room which was the office at the side of the stage. As I walked in JE said to JW "have you met Gordon Giltrap before?" "No" JW replied "we never have". With that he held out his hand in greeting and said "pleased to meet you....John Williams" I of course knew who he was but how lovely of him to be so self-effacing. A truly nice man.

In the second half the evening just got better and better, and after the encore a repeat of Maddie Goes West where John pulls all the stops out on his electric guitar, puts his foot up on the monitor and truly enters heavy metal mode, the audience rose as one to give us a roaring standing ovation.

As we made our way to the back of the hall where our merch table was situated John Williams was there to greet us and was truly brimming over with enthusiasm over the show. I have never seen anyone so excited after a concert. I think we gained a fan in JW that night.

The tour is now over and although the business part of my brain knows that financially we can all make more money on our solo concerts, this quartet is so special that it would be a shame for it not to continue and please God create more great memories in the future.

I'm delighted to report that on the 22nd of this month 4 Parts Guitar are doing a session for the wonderful Bob Harris at his Oxfordshire home. I shall be reporting in next month’s news with hopefully loads of photos to mark the occasion. 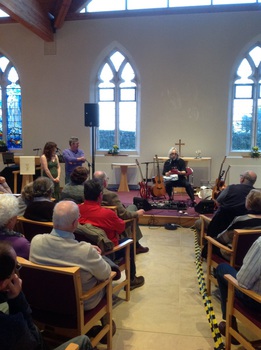 I was so preoccupied with the loss of John Renbourn and the sadness of it all that to my shame I forgot to give a mention about my birthday concert where surprise guests Carrie Martin and Paul Ward turned up to share the evening with me. To my surprise on arriving at St Nicholas church Radford Semele there was my good friend Mike Stranks with his beautiful PA system and him as sound man of course as a birthday gift!

I was as you can imagine deeply moved by all of this. I played a couple of pieces and then the surprise happened....Carrie appeared with Paul and presented me with gifts one of them being six free range eggs and two tea towels!

Carrie then sang two of my favourite pieces one of them being Time after Time.

It was a wonderful evening and a great turnout. I was expecting a small audience and none of what was to follow. My sincere thanks go to Martin & Louise, Carrie, Mike and Paul for creating a special memory.

I was particularly looking forward to visiting the church of St. Nicholas at Radford Semele. By courtesy of the local arsonist, on Easter 2008 the church had been left essentially a roofless shell with tower attached – and scorch marks still plainly visible on the exterior bear witness to the conflagration.

The expenditure of much time, effort and no doubt copious amounts of lucre has resulted in a magnificently restored building - the modern elements of which blend with the old to produce a building equally suited to acts of worship, use by community groups, and concerts by accomplished musicians.

It had been an unprecedented four months since my last live dose of the Troubadour’s music: it was Gordon’s birthday, and a fine evening’s entertainment was promised.

We learned soon after our arrival that surprises were in store for Mr.G. Surprise number one was the presence of Sir Mike Stranks – once again coaxed out of semi-retirement to twiddle the knobs on the sound desk and generally attend to acoustic duties.

Surprise two was the appearance – to Gordon’s delight – of Carrie Martin; who requisitioned the stage and performed a Cyndi Lauper cover and her self-penned song “Luna”.

During this interlude, Gordon was also presented with his very own raffle prize - the almost legendary six free range eggs and a tea towel – these to go with his other birthday gift of a pair of strikingly distracting patriotic socks (that are apparently never to be worn again).

Our Troubadour quickly regained his composure and proceeded with his set list – which included: A Dublin Day, Appalachian Dreaming, Isabella’s Wedding, Dodo’s Dream and – with due acknowledgement to the influence of Messrs. Graham, Jansch and Renbourn – Angie.

Of special note was a first hearing – for me at least – of Gordon’s composition dedicated to his daughter, Sadie.

The evening was rounded off in traditional style with a generous helping of the ever-popular Heartsong followed by an extra portion of Lucifer’s Cage to see us on our way homeward bound.

“To send light into the darkness of men’s hearts – such is the duty of the artist” So said composer Robert Schumann. This continues to be an obligation well executed by Gordon Giltrap. Thank you, Troubadour, and hippo bathday.

Review by Bruce from the discussion forum

Quick post to say thank you to Gordon for a wonderful gig last night. What a great evening.

This was my first Gordon gig and it took my breath away, each and every track was inspiring, the chat between songs engaging and humorous.

Highlights for me were many but standouts, Dodo's Dream, Angie, A Dublin Day and of course Heartsong.

The surprise visit of Carrie Martin was fantastic and to hear a couple of her tracks was a delight, I'll be looking to buy some of her albums asap.

Overall an amazing night, great sound thanks to another surprise guest Mike Stranks and finally, Gordon's patriotic socks, amazing, though I'm sure Gordon will never gig with them on again as he commented on how distracting they were!

Thank you Sir, hope it was indeed a Happy Birthday. 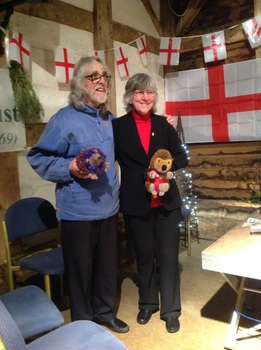 Yet another lovely evening at The Fleece for The Tracy Sollis Leukaemia Trust. I so look forward to this date in our calendar and it comes round all too soon. This year was my 21st as a patron and my 9th at The Fleece.

I haven't been of the best of health recently and was only five days away from an Endoscopy which knocked me about a bit, but I was determined to play some newer pieces and revisit some old ones. Because of a borrowed car I hadn't enough space for my speaker stands so just propped them up on chairs which wasn't ideal, but we got there in the end.

The usual raffle raised funds along with two items for the auction, a painting and an acoustic bass that was once mine. The bass fetched £100 which was brilliant and the painting £40. Hopefully we will exceed last year’s figure of about £1000.

The crowd was reserved to start with but warmed up as the evening progressed. Two gentlemen had travelled down from Scotland to attend the concert along with a lovely couple from Cardiff who were both making a weekend of it. I'm always touched that folk travel all that way to see me.

The photo shows Sue Sollis with the charities mascot Harry the Hedgehog along with a little gift from us and a friend for Harry called Hattie the hedgehog.

Here's to next year’s concert.

Interview with Malcolm Dome for Prog 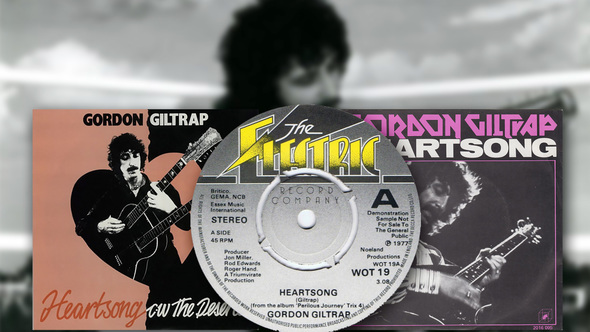 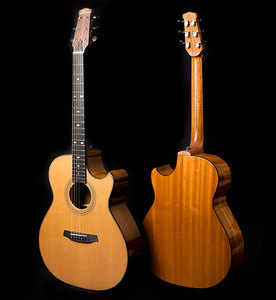 I have yet to collect my new creation from the great Roger Bucknall. Hilary and I are up in the Lakes at the beginning of June to collect the beast and at the same time return a lovely Baranik guitar that was featured in these pages a while back to that nice Peter Sorton who gifted it to me along with a baritone Uke. Both these instruments lovely as they are not being used to their capacity and I hate having instruments that aren't being put to good use and "played" so returned with grateful thanks they shall be.


Take a look at these stunning photographs of my new instrument from Roger's April newsletter. I shall be writing back in detail when it is finally in my hands.

Roger writes: "It's finished!!! I am very very pleased.

Gordon and I have been discussing various options for about four years. For part of that time he played a slightly battered Orsino that he bought from me at Ullapool, and convinced himself to commission an Orsino with a cutaway so that he could reach the clever end. But I like to make Gordon rather unusual things and that idea seemed a bit too straightforward. So - a little brainwave, a Leonardo, made with Mahogany back and sides and a Cedar top, it gives Gordon everything he wanted, and it opens up a new direction for me. 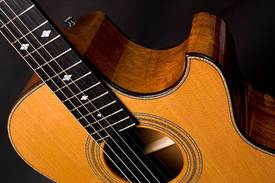 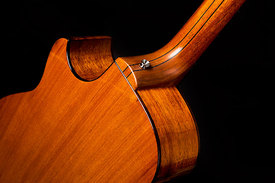 For me, this is a little bit like bringing Gordon Giltrap and Nic Jones together - imagine that".I think it looks really impressive, and the combination of light materials with the Leonardo shape make this guitar extremely comfortable to hold and play. The Chrome tuners, black buttons and Pearl diamond inlays add perfect finishing touches.