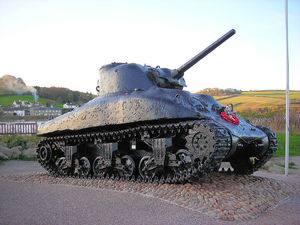 On February the 14th (Valentines Day of course) Hilary I travelled the two hundred miles down to Torcross to visit two special people Dean and Sarah Small. Dean's late father Ken Small recovered this tank from the sea and threw a beacon of light on to one of the tragedies of World War Two where many American servicemen died unnecessarily whilst in training for D Day off the coast of Devon. This culminated in Ken's book The Forgotten Dead, a detailed account of the preparations for Operation Tiger and the D Day landings.


Dean needs all the help he can get these days to raise cash for the upkeep of this monument which elicits a very emotional response from many who visit it and hear the tragic history surrounding it.

I plan to do whatever I can in my own way whether it be great or small to raise funds to stop this extraordinary survivor of the last war from rotting away. Obviously nothing lasts for ever but I would hate to think that within twenty years it will have disappeared.

The only way I know is to do a series of fundraising concerts in the area and try to get as much radio and press coverage as possible. I have already contacted the lovely Judy Spiers down there at BBC Radio Devon to see if she and the station can do as much as they can to promote my first concert later in the year.

Dean has also loaned me a very special Mandolin that had been signed by some of those servicemen who took part in Operation Tiger and were fortunate enough to survive that historic landing. I shall be telling the full story of this remarkable instrument in an article for Acoustic Magazine very shortly.

I shall keep you all informed of developments.

In the meantime visit the following. www.exercisetigermemorial.co.uk 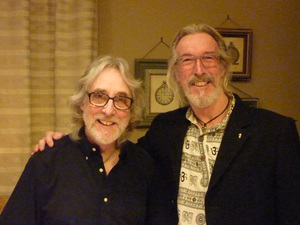 On Sunday February 1st I played a private concert which was part of a surprise birthday treat for Trevor Rolf's 65th birthday from his lovely wife June. Being part of an evening such as this reminds why I so enjoy doing these private concerts, and helping to create a long lasting memory for the people involved.

The venue was The White Rabbit pub/ restaurant/ hotel in Maidstone. Hilary and I decided to travel up the night before just in case the weather was bad. Fortunately it wasn't.

The birthday boy arrived at around 6-o'clock and had no idea what was going on. The interesting thing is that Trevor does bear a striking resemblance to a certain acoustic guitarist albeit much taller than the aforementioned musician. You can see by the photographs the similarity in hair and beard colour and face shape. Hilary said we could have been brothers if I had brother that is!

Sue and Mike Holton were part of the invited guests along with special friends and family. I truly loved every minute of it and can only wish Trevor and June all the best for the future and many happy returns to Trevor, who is without doubt a truly loyal and staunch fan of my music. Hilary and I thank them and in fact the whole family for making it SUCH a special evening.

You can read more about the evening HERE

I'm delighted to report that my assistant on the guitar weekend in September will be my good friend Garry Burnett. Garry is a fine guitarist and teacher, and what he doesn't know about my music and technique isn't worth knowing.

Garry has been " keeping the faith" for all things Giltrap for the best part of 30 years and beyond, and I couldn't wish to have anyone better in terms of playing and teaching to share the weekend with."

A Time to Reflect

Well the new CD A Time To Reflect is well and truly out, and the good news is that HMV have decided to take it for all their major stores and on line outlets!

For someone who has been in the business for as long as I have to still know there is interest in my music past and present is a wondrous thing and believe me I'm very grateful that enough folk out there still want to listen to the old Troubadour.

I’m hoping that the label will be lining up some radio interviews some time down the line as I always enjoy doing that sort of thing, and living where I am it makes it really easy with access to The Mail Box in Birmingham where the BBC has one of its studios there with a digital facility whereby I just going into a small booth (soundproofed) where I can be connected to every major BBC radio station throughout the UK/ Scotland and Ireland.

I think the radio stations like me because I can just turn up and play something live on the air OR a pre - record and it sounds as though I'm actually right there in front of the interviewer.

If I get any radio stuff this month I shall of course report back.

My final piece under the banner of "unusual tunings" will published soon in Acoustic magazine. The piece is entitled "Sadie In May" and is dedicated to my lovely daughter Sadie. The tuning is interesting in as much as it is tuned in fourths which basically means for all you guitarists that the first and second strings are tuned UP a semi tone to C and F.

I'm personally delighted with the piece and a brand new recorded version which is a development from the original will be recorded sometime this month.

The other piece of good news is that Acoustic want me to continue writing my techniques column for them, and this time I have chosen the ever popular DADGAD tuning of which I have explored deeply over the years and produced many pieces, six of which will be published on a bi monthly basis in the magazine. 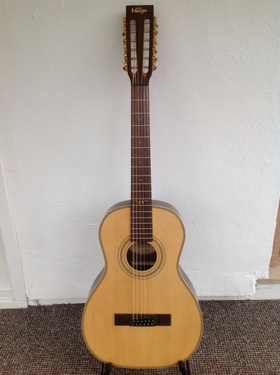 I have always had a weakness for 12 strings and am probably still subconsciously searching for the perfect instrument, one that is easy to play, doesn't sound out of tune and plays with perfect intonation beyond the 12th fret. Well the answer to that is that the lovely/ beautiful fan fret 12 string that the great Roger Bucknall made me a while back and is now owned by Troy Donockley was the probably the closest that this guitarist got to the perfect 12 string.

I still have fond memories of my first proper 12 string my lovely Harmony way back in the sixties, but even that had issues.

Since then I have lost count of the 12 strings that have been through my hands, but they all went eventually. It wasn't the instruments fault, it was more down to me expecting FAR too much from them, and that is probably still the case.

I just love that huge jangling pianistic tone that they produce!


This new addition is lovely and is the Paul Brett 12 string ,that is sensibly designed to work as a 12 string, with 12 frets to the body thus making the pull on the neck that little bit less, and being a shorter scale it has less tension which does make it easier on these old fingers of mine!

As you can see by the picture it is a small instrument with almost parlour guitar size proportions.

It has a built in pickup and sounds huge plugged in. Let’s hope I can make it work for me because it deserves to. I spent a whole day setting it up and fitting new strings and it does indeed sound really sweet. The only down side are the machine heads which could be a lot smoother, but a I shall set to work on those at some point and hopefully will be able to make them work a tad better!

This guitar like its cousin The Viator represents silly value for money, and like MY signature series places great sounding, great playing instruments into the hands of most players who are on a limited budget. Believe me this guitar could carry a higher price tag and still be worth every penny.

I congratulate my old friend Paul Brett on bringing to market yet another superb instrument under the Vintage JHS banner.

I received this lovely email a few days ago....

There I was at Robin Millar's preparing for some new recording that we're doing together when he played me some of your album 'Troubadour'.

Having owned 'Fear of the Dark' on vinyl in the late 70s, it was excellent to be reminded of you.

I immediately bought 'Troubadour' on Amazon ... it's a really great album, mate, that seems to sum up a whole (most welcome) genre of rootsy Englishness in rock music.

Then I followed the last track with Sandy Denny's 'Music Weaver', which worked really well as a segue.

(And thanks for keeping on keeping on, as Mayfield would sing ... .)

Well, February is nearly at an end and three Village Hall Concerts have come and gone with Tidewell waiting in the wings as I write this.

As you all know I just love doing these village hall events. I love the sense of community and the simplicity of it all. We meet some lovely people who truly go out of their way to make us welcome and make the evening go well.

The interesting thing about my February 7th concert at West Hallam was the fact that I have strong family ties with the village, so much so that when the organisers found out that was so strongly associated with the village, they have asked me to turn on the Christmas lights in December! How lovely is that? I shall be opening supermarkets next. (Grin) 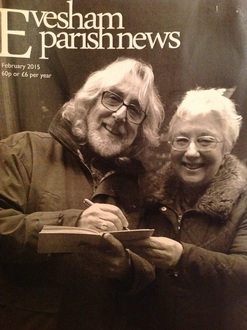 On Thursday the 19th Hilary and I were guests of the lovely Barbara Dickson who was performing with her band along with the amazing Troy Donockley at the Lichfield Garrick Theatre. A truly magical night all round and great to see her and Troy again. Hopefully some photos have been taken!!

It is VERY rare to be asked twice to present the awards, so I feel quite honoured.I have been invited to present the Prog Rock Awards once again on Saturday 21st at the Montgomery Hall Wath Upon Dearn. I shall be reporting back in detail next month with photos and a blow by blow account of the evening

Well folks I have finally made it! How lovely to be on the front cover of the Evesham Parish News with this lovely lady who wanted my autograph at the opening of Sue Sollis's new charity shop. Happy days.