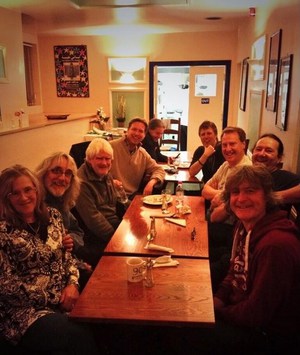 Last month’s news was dominated by the Summers End report for obvious reasons, but now that the smoke has cleared, there have been a lot of concerts to tell you about, but what I don't want to do is just give a blow by blow account of each concert but more of an overview of events.

Throughout October and November Wakeman the younger and I have performed twelve stand-alone duo shows, and by the end of November eight concerts as special guests of John Lee's Barclay James Harvest, and interspersed in between I have performed  four solo concerts, one being a delightful private concert.

In many ways going back to duo concerts after Summers End was for me a complete doddle because we just picked up where we left off, and then doing the special guest spot for JLBJH was like being on holiday bearing in mind all was required of us was just a 45 minute set utilising our strongest material. Oliver and I were finished by nine o'clock most nights and in Oliver's case well on his way home where it was feasibly possible for him to cope with the drive.

You can see some excellent new footage on YouTube of Oliver and I at the Brook in Southampton on the 22nd of November, filmed by Pete Bradley HERE

Now a word about the guys in JLBJH. One couldn't wish for a better bunch of people to share a dressing room with, and to add a bit of ego massaging to the mix, Craig the bass player and Kev the drummer are both admirers of my work. Imagine how chuffed I felt when Kev presented me with the new releases of Visionary, Perilous Journey and Fear of the Dark for me to sign for him... well what can one say! 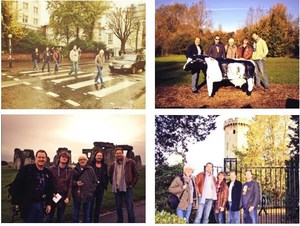 John Lees is a very quiet, thoughtful and private person, but as the tour continued we got to know each other, but it's very difficult given the short period of time to get to know anyone really, but what I like about the whole situation is that there is no ego's at all, which is great, and Oliver has been travelling with the band on many of the shows, and has even coerced them into his fun Prog Rock clichés Tweets. Find out all about this at Olivers's Twitter page

Oliver writes: As promised I've finished my tour report and you can find it HERE

Now brief notes about the gigs, duo, solo and JLBJH

October 3.. Trinity Arts Tunbridge...one of my favourite venues.
October 4... Cirencester...again nice venue and the students who helped out were great.
October 9... Aldershot, again a nice gig and particularly good sound.
The same can be said for Tenbury on the 11th, Redditch on the 12th, and Walberton on the 15th, and onwards to Chatham on the 17th and Sheffield on 20th, Horsham on the 25th was a joy in terms of audience numbers, and the same can be said for Leicester on the 30th and North Hykeham at the end of the month.

I forgot to mention a cracking solo gig at the Stafford Gatehouse on October 24th promoted by the local guitar shop and Eric the owner, and what a great promotional job he did. More people who promote shows could take a leaf out of his book. Well done Eric! I'm doing a meet and greet for him in December as a way of saying THANKYOU.

I also forgot a cracking little guitar show hosted by Intermusic in Dursley not far from Bristol that I took part in on behalf of JHS on the 14th of November. I shared a fun evening with Gavin Coulston who is JHS guitar demonstrator, and session guitarist Jamie Moses who has worked with numerous superstar players including Brian May. A good fun evening all round, and no I didn't buy any guitars...grin!! 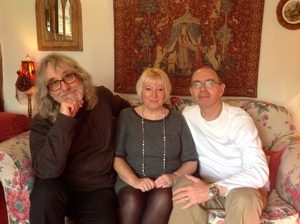 Now let's look in detail at November, which has been a fairly mixed bag of tricks. November 2nd was delightful, because I played a surprise concert for Linda and Mike Bray to celebrate Mike's retirement. This was held in the beautiful Guildhall in Finchingfield Essex, to a small but appreciative gathering, and afterwards we stayed with our hosts in their beautiful period cottage. Lovely people, lovely gig, and just lovely all round.

We wish Mike health and happiness in his retirement.

Mike knew we were going out for his party, and I had assured him he was going to enjoy it. He seemed a little restless during the day on that particular Saturday while my daughter and I were running around with preparations.  He seemed a little confused as to why I was not doing the catering at home.

However all was revealed when I brought Mike up the stairs to meet Gordon.  He was so surprised, a double take took place as Mike digested the realisation of Gordon in front of him while I explained he was to have a private performance.

I placed Gordon and his lovely wife Hilary on our table for the meal so that Mike could really spend time and get to know Gordon.  This was excellent as he had everyone he loved around him together with his favourite guitarist.

The performance was superb! Lots of variety of Gordon’s Skills including Gordon’s unforgettable version of ‘Here comes the Sun’ followed by our many favourites which included ‘The Dodo’s dream’,  ‘Shining Morn’ and Rachel’s Reflections’

All of our family and friends totally enjoyed the evening and said how fantastic Gordon was. Our three year old granddaughter danced her way through the concert in time with Gordon’s beat. 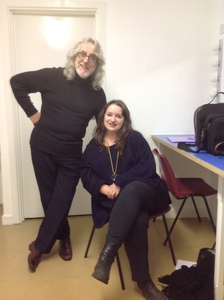 The following day Hilary and I drove back to Sutton to prepare for my fund raising concert at Duke Street Church for St Giles Hospice. Mike Stranks did the sound, and 200 people attended with a total of £2500 raised for this worthwhile cause. What a great result! November 2nd next year is now in the diary for a hoped for repeat performance!

On November 12th Oliver and I played at one of my favourite venues and that was the Forest Arts Centre in New Milton Hampshire.

A great turnout and our friend the Jazz singer Emma Blake was in the audience along with Phil Werninck for whom I had the pleasure of playing a private performance a while ago. Read part of his review below or in full HERE

These are two men at the top of their game. Having worked together for around 12 month now, Gordon and Oliver have become a slick duo, and seemed very comfortable together. Both men are very skilled and talented. Whether you have a technical interest, or just an interest in good music, then their performance is I can assure you essential.

The evening was beautifully put together with Gordon's and Oliver's back catalogue given equal airing; these where played jointly, along with a solo spot each. The new joint album, Ravens and Lullabies sits very well in the performance, with very strong material. I felt that the subtlety of the quieter music from the album, is at its best with just guitar and keyboard alone. 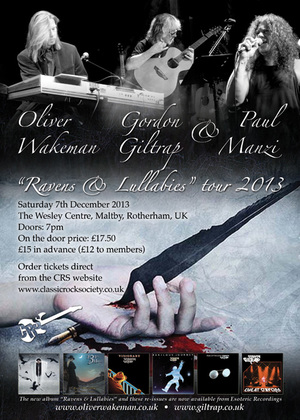 Needless to say all the JLBJH concerts have been packed out, and Oliver and I have been wonderfully well received with even a standing ovation at the Holmfirth Picturdrome on the 16th of November.

The London date in Islington was special as Paul Manzi guested on two songs from the Ravens album, Maybe Tomorrow, and Ravens will Fly away. He was in fine voice and it is such a joy to have him on stage with us.

As I write this we have three more dates with JLBJH, then we have a trio gig for CRS on the 7th of December with Paul Manzi.

If you are able to help us promote the show by printing and putting up posters ( legally please !! ) please use the file at the bottom of the page.

The first thing you can’t help noticing about Gordon Giltrap (a legend of acoustic guitar to rival Renbourn and Williams, if ever there was one) and Oliver Wakeman (son of Rick, and like his father an ex-Yes-man and Strawb) is their sense of humour. For two men associated with musicianship, dexterity and a form of progressive rock some may misinterpret as ‘po faced’, they certainly enjoy a laugh, and bring a warmth to the proceedings as a result, interspersing each song with wry anecdotes about their careers, their non-prog-appreciating wives and the music of lesser-talented, French MOR pianists (I think you know who I mean...) that serve by way of fine contrast.

Sometimes, the perfection and technicality of Wakeman’s playing can both overshadow and sonically drown out Giltrap’s looser, more organic approach, but they still complement each other perfectly, and the addition of vocalist Paul Manzi (currently fronting the Heavy Metal Kids) on a couple of numbers brings yet another unexpected dimension. Rounding things up with what Giltrap calls a “medley of his hit”- ‘Heartsong’, they gave the fans enough entertainment to make them wish for more in future, which is, I imagine, what we’ll be seeing of them in 2014, especially now Esoteric Records (also home of JLBJH) are reissuing Giltrap’s s back catalogue. 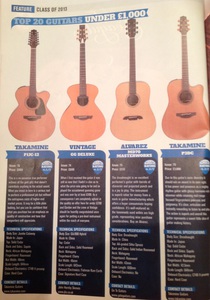 I was so pleased to see that my new GG signature guitar has been chosen by Acoustic magazine as one of their chosen top 20 guitars of the year in the under £1000 category. Also in the same issue is my tuition column featuring Wherever There Was Beauty utilising the wonderful partial capo.

December 3rd is probably the most significant concert of my life at London's Festival Hall. The sold out concert is to celebrate the life of my friend Bert Jansch. My contribution is to perform the piece I wrote for his dear wife Loren who passed away within a few months of his passing. I shall share my thoughts with you all next month.

To celebrate one of the most influential guitarists of all time, Bert Jansch, a host of special guests unite for a unique show.

Bert was included in Rolling Stone magazine's top 100 guitarists of all time, as well as winning countless awards and receiving an honorary Doctorate of Music from Napier University in his native Edinburgh.

I’m delighted to tell you that Roger Bucknall's new book is now out and available to purchase and will of course make a great Christmas gift. Details are all on Rogers website HERE , and yours truly has written a few words in the book along with Martin Carthy and Eric Bibb. 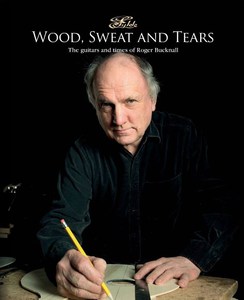 The book is finally finished. It is a little bigger than I thought it would be, it seems to have grown to 55,000 words, 380 pictures and 246 pages. But it is still the same price! I have shown the draft copies to a small number of professional players, and everybody is very impressed. It has forewords by Gordon Giltrap, Martin Carthy, Nic Jones, Martin Simpson and Eric Bibb. 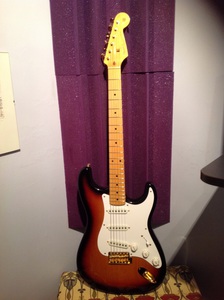 The recently re-released trio of classic albums received a great review in R2 Reel To Reel Magazine by Trevor Raggatt. Thanks Trev!

The guitar this month is a custom made Strat bought from my friend Stu Field’s shop in Worcester.

It rings like a bell, has a great action and that authentic Strat twang and is based on what is now known as the Buddy Holly Strat.