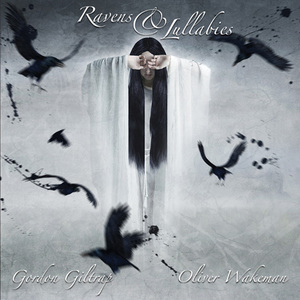 January is usually a pretty quiet month, but because of that it gives me time to catch up with ideas creative and otherwise.

One of the significant things to happen was to re-establishing my relationship with a fine guitar tech. Over the years I have extolled the virtues of makers and craftsmen that I feel deserve a mention. Gifted people like Roger Williams, Trevor Buck and Dale at Stagecraft up in the north-east.

With this New Year I have been fortunate to have found yet another outstandingly gifted person in Trevor Jones. Read the following and all will be revealed!

At the risk of repeating myself, things are moving forward with the planned release on 4th March for the album.


Ravens and Lullabies now on pre-order

You can now place a pre-order for the 2CD Signed Limited Edition from Cherry Red Records for £11.99 + P&P Release date is confirmed as 4th March.

Oliver and I have already done an in depth interview for Classic Rock magazine, the one you see in W H Smith!

The interviewer loves the album so hopefully it bodes well for the future. Our London trip for Cherry Red TV had to be re-scheduled for later in the month because of the bad weather.

Dates are being finalised as we speak so do keep an eye on our respective websites for any future developments.

In case you haven’t seen the CD track listing I’ll repeat them here.

There will be two different releases of the album.
A standard single CD with the following 13 tracks


The 2CD signed limited edition will have a second CD featuring the following tracks
Live recordings taken from the 2012 tour: 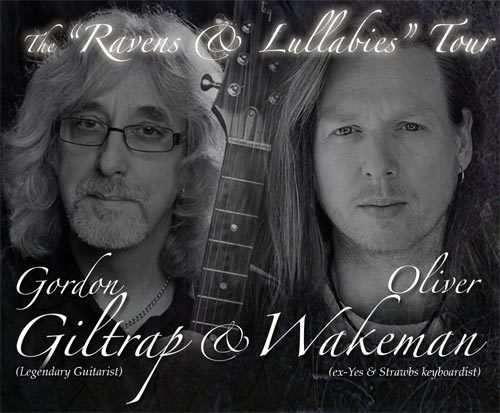 More dates to come so keep checking the website 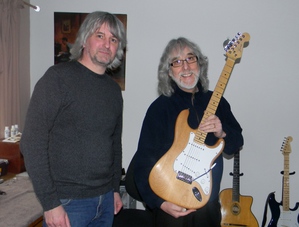 Let me introduce you to my friend Trevor Jones.

I met Trevor a few years ago when he was the number one guitar tech for Barnes and Mullins.

Trevor has spent a lifetime working with guitars, and over the years has worked on many a guitar legend’s instrument including, Joe Satriani, Jan Akkerman, Chris Rea, Noel Gallagher and Paul Weller. Other names on the list are The Amy Winehouse band and last but not least, Sir Paul McCartney. Quite an impressive list I’m sure you will agree!


Trained as a mechanical engineer, Trevor is also a sound engineer and a fine guitar player in his own right. He is an outstanding woodcarver, builds and restores antique swords and daggers, and has developed an impressive array of guitar care products. In between all of this he finds time to produce beautifully crafted instruments!

He is a perfectionist to the enth degree, and a thoroughly nice human being!

I am proud to announce that Trevor is now my main man when it comes to guitar repairs, set ups, and all things related to our beloved instrument.

If you want any work doing on your instrument be it electric or acoustic then Trevor is your man.

Guitar Of The Month

This month’s guitar is made by Trevor Jones. It is a lovely thing, all handmade. I shall let Trevor tell you all about it! 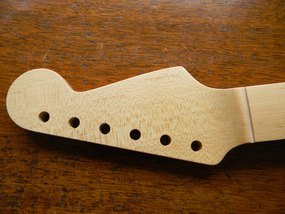 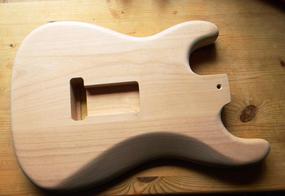 I made the guitar in 2011, the body is made from two piece alder. The neck is maple with a maple fretboard. The pickups were supplied by Fenders custom shop. All wiring is completely standard strat.

The finish on neck and body is oil varnish, which has then been cut back and french polished. There is a mother of pearl plaque inlaid into the back of the guitar with my signature engraved into it. 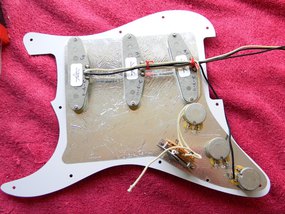 The machine heads are Wilkinson, as is the tremelo unit. The neck has been made to be a tight push fit into the body, this eliminates any movement in neck alignment. The frets are standard width with a tight crown. 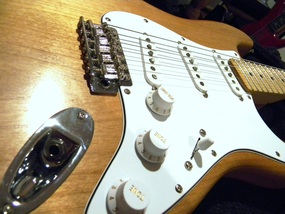 I have spent many years customising strats for artists, I wanted to make an instrument that was made to exacting standards and would not need any customising or improvements.

I gave the guitar a name- Stella Matutina  (morning star)

I was in the opticians recently looking for new frames. The lady working there was showing me some original design Ray Ban frames. She said and I quote. “These are what Frank Marvin would have worn in the early days”. I replied, who is Frank Marvin? Knowing full well who she meant. A woman standing next to us overheard the conversation and leaned across and said “Hank Marvin”. Well, I thought it was funny anyway!

Our beloved agent Sue Webster is now back in action after a very sad time in her life with a bereavement and other personal problems.

I had a great meeting with her in January in the Huntingdon Hall cafe, and we are planning some more dates for Oliver and I, along with dates for Double Vision and a major spring 2014 tour with 4 Parts Guitar.

I have a studio project planned with my good friend Paul White for this year. We are both keeping a completely open mind about it, and are prepared to take it in any direction that we feel it naturally wants to go. It’s quite exciting to have a “blank canvas” project such as this after all the solo albums I have released over the years which were of course purely instrumental and acoustic based records. This one could go in any direction it wants, and may even find the odd song cropping up here and there with the wonderful Carol Sampson showcasing her vocal and writing talents. This will also give Paul the chance to really stretch his creative wings in the production department and add some of his lovely electric guitar to the tracks! We shall just wait and see eh!

I’m delighted to report that the UK’s number agency in the field of After Dinner Speaking the Gordon Poole agency has added me to their roster of names. This of course is no guarantee of work but at least my name is out there with the best.

My thanks to Sue Holton for recommending the agency and suggesting I “give it a go”.

Thanks to Mick Dodsworth for sending us some photos of Gordon at the Great British Folk Festival, Skegness in Dec 2012

You can see the photos  HERE