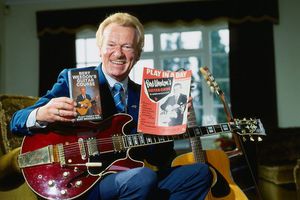 The funeral of Bert Weedon 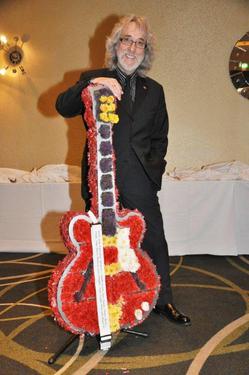 I had the great pleasure of chatting with Val Doonican after the funeral and recalling my time on his show and saying how prominently he figures in my live shows. It raised a smile from this lovely Irishman who is looking amazing for his age, and admitted that he didn’t recognise me with the beard. A polite way of saying he didn’t recognise me because I’m now a tad older and VERY grey!

I didn’t get a chance to speak with Brian who disappeared pretty quickly after the service, but received a  reply to my e-mail. Brian is such a nice man. He said that he would be visiting his old friend Tony Iommi soon to discuss plans for their upcoming “riffs” album project, and how it would be good for Tony to focus on something positive midst his current major health issues. Tony has been diagnosed with cancer. I asked to be remembered to him.

Back to the funeral and the after service tea at a local hotel. We had a brief chat with Bert’s widow Maggie, who put on a very brave face for the day, but confided that she doubts she will ever go out in public again! Such a sad situation and one we hope in time will change. In the meantime her loss is pretty unbearable in spite of Bert’s great age and long and incredibly blessed life. We wish her well during this time of mourning. We shall miss seeing them together at the odd social event Hilary and I attend, usually associated with the Water Rats.

RIP Bert you were a ray of sunshine.

I know it’s a long way to go for just one gig, but seeing friends Terri & Tony Hicks and Ian & Jenny Miles on the way down made the journey that much easier.

The festival has been running for about 16 years now is a delight to be a part of, and of course the location is wonderful. Fowey is definitely a place to spend time in.

The gig at the church in the town went well apart from a difficult parking situation and my dressing room (the vestry) being the only access to the church loo! Quite novel really sitting in ones dressing room preparing for a gig with the occasional person walking through to use the lavatory!

All that apart, the gig was fine and the audience lovely. We had about 130 turn up for the concert which I was told was outstandingly good for the festival and the location. Great to see friends Andy & Jen Smy who drove all the way from Barnstable to attend the show. My thanks to them and the friends they brought along who helped us out with the gear, after the two sound men cleared off when the show was over leaving the church with a rather empty feeling. It would have been just Hilary and I loading the stuff out to the car... 6 guitars, pedal board, string case etc. IT’S THE GLAMOUR  OF THIS JOB THAT WE LOVE..... grin!

A lovely thing happened the following morning. Kate, one of the directors of the festival asked if we would like to stay over for an extra day at the wonderful Fowey Hall Hotel and they would cover the cost of the room. We of course said “Yes please”. This meant that we spend a wonderful Saturday just walking round Fowey and relaxing generally .Thankyou Kate for that kind gesture!

I sincerely hope the festival continues during these troubled times of funding being cut for the arts generally. We would love to come back, but maybe a different location would be nice, as much as we loved the church, it wasn’t ideal. 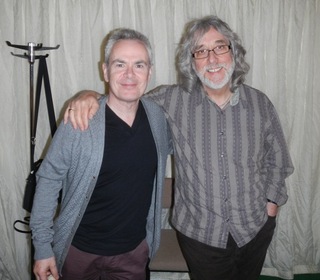 It had been the best part of 30 years since I met Nik Kershaw. So, seeing him on the same bill as me for the Daphne Du Maurier Festival was an opportunity not to be missed as we were staying over anyway.

My respect for this incredibly gifted artist is immense. I know he is part of that 80’s pop culture, but he really was head and shoulders above everyone else in all areas. Great image, great guitar playing, great songs, great voice, multi-instrumentalist... the lot.


His concert with his band at the festival was amazing. Sadly the pretty small turnout for this guy really surprised me. Such is the power of TV. If you aren’t on Jools Holland or X factor you've got no chance. Do I sound cynical and old? YES!

We met up afterwards and he remembered the time we met all those years o at the start of his career during his first video shoot at Hever Castle. We were chatting about guitars (like you do) and he expressed an interest in having a GG acoustic as part of his on stage armoury. Watch this space as the wheels are in motion. I of course would be thrilled to have him play one of my guitars. I can then add him to the list of high profile players who use the guitar. Midge Ure actually paid for his! 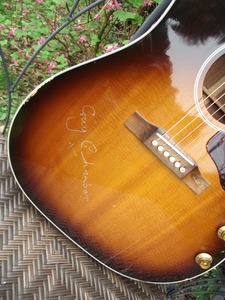 I’m delighted to report that the Gibson J160-E acoustic guitar that was featured recently in our News pages and was repaired and prepared for auction for Katherine Kent’s charity Future Talent has raised £3,700 for the charity!

My thanks go to Roger Williams for his repair (free of charge) and to JHS for the kind donation of a hard case. Thanks also to Kaz & Leigh Greenham for all their time and effort creating a nice laminate with the guitar’s history and for collecting it from our home.

The guitar that was once owned by Guy Chambers (Robbie Williams etc), was used  to record a one off piece for CD (Kaz) has really surprised us with the amount raised. I was hoping for maybe £1,500 but to double that plus £700 is amazing! I hope it has gone to a good home. 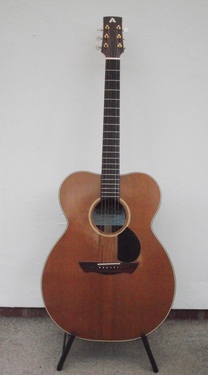 It has been a while since folk have seen this old guitar of mine. Made in 1992 by Rob Armstrong and used for about 80% of the Troubadour album and on stage for many years. I even have a picture of Sir Cliff holding it....”Wow” I hear you cry!

I have sort of retired this guitar in favour of smaller bodied instruments like my 1980 Armstrong on which the Vintage GG was based and of course my beautiful Fylde guitars.

This double cutaway design has been a favourite of Rob’s since its inception in 92. I can’t swear to it but I believe this was the first one of this design that he made. It truly does have an amazing sound, and like all of Rob’s guitars, has a unique tone. It may come out of its case for more recording!
Rob made his exhibition model for Sleaford’s Guitar Exhibition of three years ago on this design so he must like it!