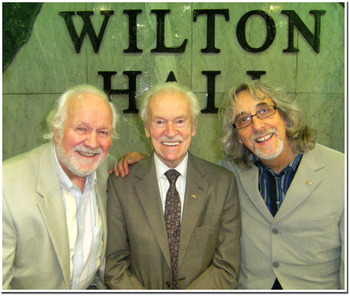 I met Bert Weedon along with his lovely wife Maggie for the first time in I believe 1980 at a Guitar Show in Manchester. It was such a thrill to meet this legend of the guitar. That first meeting was outstanding and Bert was VERY complimentary about my playing, and I was floating two feet off the ground after he had bestowed so many compliments on me.

We met many times over the years at various guitar shows, and when I was writing my book on Hofner Guitars he was of course my first port of call. Hilary and I have wonderful memories of spending the day in their lovely home in Beaconsfield, looking at guitars and all his amazing photographs. I was drooling over his legendary thin line Golden Hofner, probably the one he played on that Kids show all those years ago. He said of course that he would never sell it but he would leave it to me in his will. Was he true to his word? Only time will tell.

In the year 2000 I was made a Water Rat, and Bert was there to give me a wonderful gift of a signed copy of 'Play In A Day'. I was always a desperate disappointment to him because sadly I never did use his book to learn from; instead mine was called First Steps by a guy named Geoffrey Sisley, his arch rival!

Bert was ALWAYS supportive of my work, and when I launched my Troubadour album in London I invited not only him and Maggie but also Jim Marshall. Both sadly departed from this world within weeks of each other. The other occasions where Bert was in attendance at GG events was when I was in Heathcliff, and one of my solo appearances at Wavendon’s Stables Theatre.

The last time I saw Bert and Maggie was at one of Jim Marshall’s birthday parties. He looked frail but well, and we always embraced each other on meeting, he affectionately calling me love! We always chatted guitars/strings and plectrums, typical guitar talk and it was lovely.

I remember many years back when I was involved in my own guitar shop with my pal Neil Cope that Bert and Maggie drove all the way down from Beaconsfield to do the shop opening g for us. He and Maggie were SO generous with their time. A few years back the Water Rats put on a tribute lunch for Bert in Bournemouth and Hilary and I were invited along with Brian May and Chas McDevitt from the guitar camp. There is a photo somewhere of us cradling Debbie McGee in a rather bizarre pic. Great fun though. 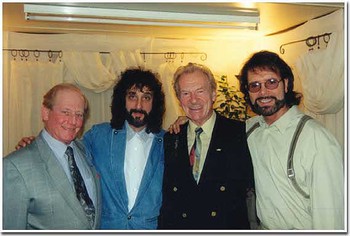 This picture is from the Apollo Theatre during 'Heathcliff', May 16th 1997. Backstage with Jim Marshall, Gordon Giltrap, Bert Weedon and Cliff Richard

I could go on and on about places and events where we have shared the day with the Weedon’s.

As I type this I’m a bit overcome with sadness at the loss of this special man and of course Jim Marshall. Both extraordinary people who changed the face of music. Bert did indeed teach the world to play guitar, sadly I wasn’t one of them! Not my fault of course because the man at Garlands guitar shop in Deptford sold my dear old Mum the complete package of guitar/canvas carrying bag/strap/ plectrum/pitch pipes and book by G Sisley.....NOT BW.

RIP Dear Bert, and our thoughts and love go out to lovely Maggie at this sad time.

I know this is old news now with the passing of this remarkable man, but do re-read my memories of Jim when you have a moment. I’m currently reading his biography which was a signed gift from the great man. Like so many people who had great talent and who I had the pleasure to meet, he will be greatly missed by those who knew him. RIP Dear James.

Just keeping you abreast with the album and our upcoming October tour. The writing continues to be fruitful and Oliver and I shall be doing some guitar and piano concerts in October. The dates are coming in as we speak, and once they have been confirmed they will appear on the website Concerts section. Working with this young genius is indeed a challenge in terms of trying to keep up with his exceptional energy. So far the album artwork has been planned and the title will be 'Ravens and Lullabies'. This album I promise you will be quite a departure for me and radically different from anything else I have ever released in my entire career!  Bet you can’t wait...Watch this space?

Well, I have finally succumbed, and it’s all that young Wakeman’s fault! Seriously though, it’s great fun and I’m quite getting into it and have so far about a dozen or so followers but it’s a start. Do check it out.

Many of you will remember that last year Hilary and I were invited to London to do an interview and session with the legendary Bob Harris. All who were featured in the 40 years of the Test series in the main did a live session for the show. I’m delighted to report that my live version of Heartsong has been chosen as one of the tracks for the album.

The album is to be released on Father’s Day and will be TV advertised so with a bit of luck I may get a name check.

For many years now I have been working closely with my friend Paul White who has engineered most of my best work to date. Paul who is the editor of Sound on Sound magazine is one of this country’s most respected people when it comes to technology and recording generally. Paul was awarded a BASCA recently for his contribution to that part of the industry, and what he doesn’t know about sound isn’t worth knowing. He recently published The Producers Handbook, a serious piece of work and invaluable to anyone who is interested in all aspects of the recording industry and studios generally. I have a rare signed copy!

Anyway, the point is that at long last we have decided to make a studio album together just for fun. This project will give Paul the chance to flex his creative muscles and do his thing on some of my compositions. This will be an album made purely for fun and for listening and not necessarily to be played live, that’s why it comes under the banner of a Studio Project. This will be the first time in my life that I shall be working on two major projects simultaneously! Paul is a pretty damned good electric guitar player, and also a pretty mean drummer. Once again I shall keep you informed of progress.

Gigs Of Note In April 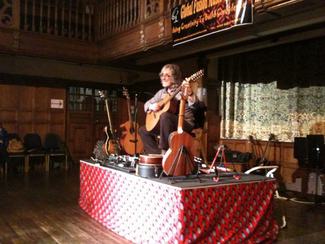 My St Georges Day concert in Charlton went well and it was good to see pals Sue and Mike Holton and Jacqui and Larry Hyett there. It was quite an amazing trip down memory lane for me. The venue was beautiful, and we were able to leave the gear there overnight as the Travel Lodge in Deptford had no parking. The following morning I was able to take Hilary on a brief guided tour of the area. It’s still as scruffy as it used to be but it was home for me as a child and I loved it! The guitar shop where my dear departed Mum bought my first guitar, a Martin Colletti is still there albeit closed and shuttered. Even the name of Garlands’ is still displayed but strangely back to front!

After re packing the car we drove all round the good old South Circular heading for Shipton Bellinger in Hampshire, I couldn’t believe that it had been nine years since I had played there....scary or what! This swift passage of time can be a bit depressing it has to be said. Where do those years go? Anyway it was a cracking hall and a sell out concert. We stayed over with a lovely couple Carol and Ray in their delightful home in the village.

It was then in the car again heading off to the Cotswolds for my annual Tracy Sollis fund raising concert at The Fleece. Once again a lovely turnout and good to see John and Pauline Adams there along with Nicky and Andy. All in all the entire concert raised £860 for the charity which is great news for the charity. Next year will be my 20th year as a fundraiser. I think we should make that one a little different and extra special. Watch this space!

I recently looked at my old sketch book for tunes and ideas and came across some TAB for the Baby Guitar. I thought it looked interesting so decided to explore further. Two days later the tune was finished and a recording made in readiness for editing. The piece is quite reflective in nature and whilst writing it my mind started to focus on the late Loren Jansch, and thinking about what an amazing person she was. As the piece developed I decided to dedicate it to the memory of this remarkable woman. The piece is simply called Loren.

I recorded it on my trusty Fylde cedar top custom. This guitar never lets me down and just sounds so rich and warm.

The piece I’m sure will find its way on to CD at some point. Which one is really down to whatever it’s right for? I have sent MP3’s to members of Loren’s family just to share it with them. At the time of writing I haven’t as yet got a response, but it was only sent less than two hours ago!

Mention in the Telegraph

It seems that I was the talk of Shanghai last weekend, resulting in a mention in the Telegraph by Simon Arron who was on his way to report on the F1 race in Bahrain. Giltrap fans get everywhere apparently  - from the description given I assumed the 'Sheffield architect' was almost certainly my dear friend Geoff Olner which was confirmed by a quick email.  Read the article for yourself here: www.telegraph.co.uk 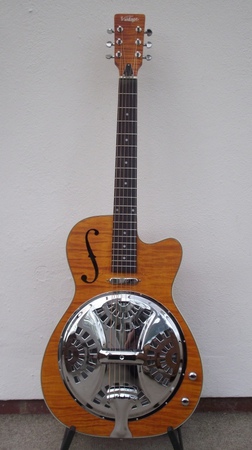 This month’s guitar from the GG collection is this lovely Vintage wood body resonator guitar.

I used a tri-cone all metal body reso on Ring Of Kerry on the Shining Morn album, and last year a dear friend of mine gave me a stunning and VERY rare Del Vecchio model which I shall feature in future news pages.

This Vintage guitar although unbelievably inexpensive has a superb tone. Since acquiring it I have used it on a few recordings, and through the wonders of the internet I have been able to take it apart and give it a serious set up, thus improving its tone in a big way.

You all probably know by now what great car boot enthusiasts Hilary and I are. At a recent car boot I bought a Fostex Personal Powered Monitor for £10. This is a great piece of kit and will find great use on stage as a personal monitor when I do my smaller intimate village hall type of shows. Yes, it was £10...To buy in the shops approx £180! That’s what I call a bargain!