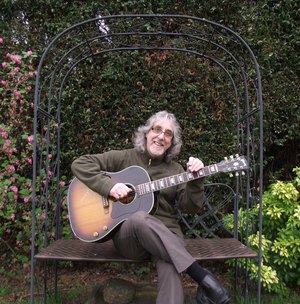 Many of you will know of my involvement with the charity Future Talent set up by HRH The Duchess of Kent, Katharine Kent and the number of fund raising events I along with Raymond Burley have contributed to.

I recently received an e-mail from our pals Kaz and Leigh Greenham relating to a Gibson guitar that had been donated to the charity as a fund raising item for any future auctions. The problem was that the aforementioned guitar had been in the charity’s office for a number of years and had unfortunately been damaged. Katharine Kent knew of my connections in terms of guitar repairs and was wondering if I could cast my eye over the instrument to see if it was repairable....

On Sunday the 11th of March Hilary, Leigh and I dropped in to Katharine’s home to inspect the damage. The good news was that the guitar was indeed repairable and, at the right event could possibly raise a substantial amount for the charity. 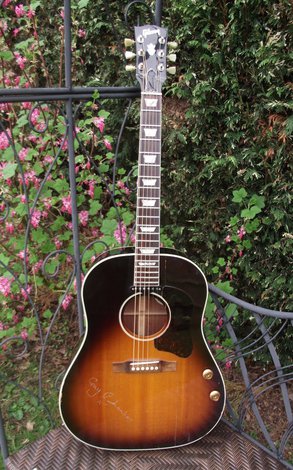 The guitar in question isn’t just any old guitar. This guitar was kindly donated by the famous record producer and songwriter Guy Chambers, he of Robbie Williams fame! It was Guy who wrote and produced many of RW’s hits of a few years back. There was subsequently I believe a falling out, but I really don’t have the details of that episode, and if truth be told I’m not particularly interested. The main thing being that this 1993 Gibson J160E could be brought back to life once the headstock had been repaired. The instrument had been signed by the man himself, and after I looked at his website which listed his pretty vast guitar collection, it revealed that indeed a Gibson J160E acoustic was listed, therefore this guitar must be the very one!

I took the guitar to Roger Williams, a man who in my opinion is the best at what he does. He kindly did the work free of charge. Before taking it round to him for inspection, I removed the machine heads and found a replacement on E-Bay for one that had been damaged. This guitar must have really had a bang to have caused that to happen! The guitar has had a lot of wear and tear during its 19 years and has a few minor alterations. For example the neck pick-up had been disconnected and an under saddle pickup had been fitted. The nice thing about the 93 version of this classic guitar (much favoured by the Beatles in the early years) is that it now sports a solid top, unlike the originals that had a top made of laminate. 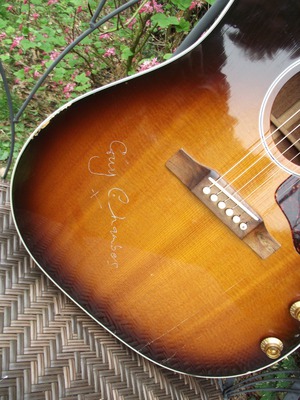 Once I had collected the guitar from Roger, I set about giving it a good old polish up and re-fitted the machine heads along with the brand new replacement. Once it had been re-strung and set up it sounded fantastic! Needless to say I wanted it, but you can’t have everything, and anyway where would you put it!

JHS have kindly donated a nice Kinsman case for it. No wonder it got damaged without the protection of a case!

It has given me great pleasure to be involved in the resurrection of this fine and historic Gibson guitar. My Thanks go to Roger Williams for his time in repairing it and to JHS for the case. I shall keep you posted as to how much it fetches at the Future Talent auction in May.

I would just like to remind you that I’m playing a rare London concert this month on the 20th at the beautiful Charlton House Library.

This concert is significant for a number of reasons, the main one being that this part of London is a huge part of my history. For a number of years I lived in Charlton road, and also from 1959 to 1963 went to school in the area and played some of my first gigs at Sunfields Church youth club not far from there, and the Conservative club also in Charlton Road. It was the local youth club that organised that (for me) life changing trip to St Ives in Cornwall.

Sadly the house where I lived, a huge Victorian building divided into flats was demolished in the late sixties. We had moved to pastures new by then. My mother was a bit of a gypsy and could never settle in one place bless her! I made many special friends there; one of those special friendships survives to this day! 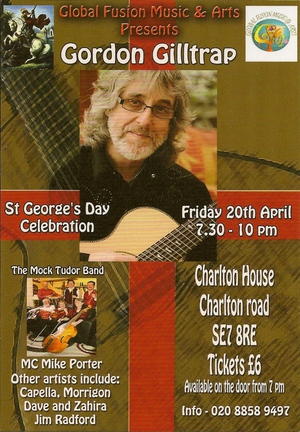 I was recently contacted by a local journalist named Peter Cordwell who interviewed me for the local paper. The significance of Peter making contact was that it was he who did one of my early press interviews for the local rag; South East London Press (Kentish Mercury) and he reminded me that he and I travelled up to London together to see my record company Transatlantic Records. I have no memory of that episode, bearing in mind it was best part of 44 years ago. Where have those years gone eh, and where has my long term memory gone?

Peter will be at the Charlton House show, so I look forward to catching up on old times with him. I was able to scan and send a rather brown and faded copy of that original interview taken from my scrap book for inclusion in the article.

Remember, I rarely play in the London area so this one for me is going to be a bit special for all the reasons mentioned. The interesting thing is that I never ever stepped foot inside that beautiful Jacobean building when I lived there. I guess I had no reason to in those days.

Try to join me if you can for an evening of fun and nostalgia. More information HERE

The 19th of March was a special day for me because that was the day when Oliver Wakeman and I were in Paul White’s studio for the first of my overdubs on one of Oliver’s superb compositions. The one we were working on is a very uplifting piece entitled Perfect Day. I had recorded my parts here at home and then transferred them over on to Paul’s Logic system. Apart from one minor change Oliver seemed happy with the results. 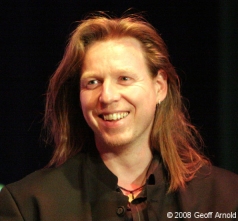 I’m currently beavering away on another of his fine pieces and a personal favourite LJW dedicated to his beautiful wife Lisa. I hope to get my parts recorded before the end of the month and then I can concentrate on some of my pieces.

This collaboration for me it turning out to be one of the most enjoyable ones I have experienced in many a year. I’m VERY excited about working with this outstanding musician and all round nice guy. 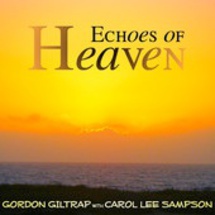 This month will see the official release of the album, and I’m hoping that Alan Robinson who is doing the PR has had some favourable feedback from the media. The album has already received a great review from Cross Rhythms magazine/ Radio Station and there are a couple of cracking reviews on Amazon.

There was always a question mark over me being involved with interviews for an album of this nature, me being pretty much an agnostic these days, but I’m pleased to say that everyone involved with the album, Carol Sampson, Martin Green, Janie Webber and Alan Robinson have given me so much encouragement that I shall continue to be a part of any PR there is planned for the CD’s release.

The album is what it is, and will hopefully appeal to folk of a spiritual /religious leaning. So far there have been a couple of negative responses, which is sort of expected. If people can just accept it for what it is, and in my opinion as a nice listening experience then that for me would be enough.

Full information and MP3 samples in the Discography section

All concerts are special to me and worthy of a mention for the special friends that attend. Bighton on March 3rd was one of them, because it was great to see Sue and Mike Holton after such a long break, and we were delighted that Sue was able to now travel relatively long distances without too much discomfort after her major operation last year. It was lovely to see our friend Jill Davies there also. Jill is the wife of the actor Richard Davies who many of you may remember from the series‘ Please Sir’. Richard played the grumpy Welsh teacher. Richard was also in the legendary movie Zulu!

My concert with Maestro Raymond Burley at Bishops Itchington Church went well and raised £1,500 for the church to have its sound system updated. In attendance on the night was the ever eccentric Rob Armstrong with his lady Sheila. The mighty Mike Stranks (pictured below) did the sound for the evening. Mike really is one of the nicest guys on the planet and a brilliant sound man. Thanks to Mike for giving his services free of charge and to Raymond Burley for doing the same. 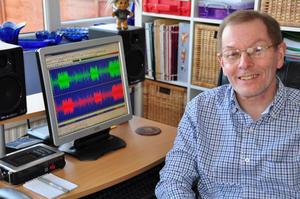 Sadly there is very little demand for this duo of ours, don’t ask me why it’s just the way it has gone. I love working with Ray, and that’s the reason why I formed Three Parts Guitar and of course subsequently 4 Parts Guitar so I could do more shows with Ray, albeit under a different and more commercially appealing banner of having two extra “names” to make the package that much more appealing.

My final concert of the month was at Packington Village Hall. I did freebie for them a couple of years back for their Twinning Association, but this time it was an official paid show. Once again Mr Stranks did the sound and all went really well. Members of my family turned up. Stepson and daughter Simon and Ruth were there along with grandson Tommy. The folk there are such great hosts and look after us right royally. I was presented with lovely bottle of wine after the show and Hilary with flowers. Most unexpected and most kind.

My thanks go to Joan and Mike for hosting us and all the volunteers who helped make this a cracking evening. I look forward to a return visit in the not too distant future.

So there I was in our local garden centre recently, purchasing some weed killer, when I was confronted by a very pleasant young man named Andrew in a wheelchair. He said “excuse me for asking but are you Gordon Giltrap”? I of course replied in the affirmative. He then went on say that he had attended the Birmingham Town Hall concert of three years ago when Three Parts Guitar with special guest Rick Wakeman played there. He admitted that he was initially drawn toward the show because of Rick’s name, but after seeing Three Parts, declared that it was the best concert he had ever seen. How nice is that?

I must pop into that garden centre more often. It really made my day, and it was a pleasure to meet this charming young man.