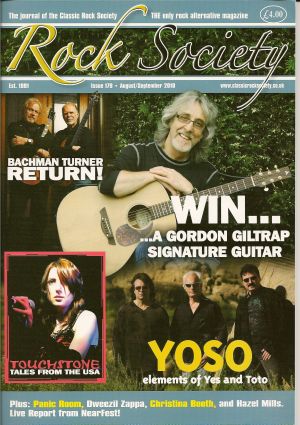 In the August/September issue of The Classic Rock Society magazine you will see yours truly on the front cover and a two page interview with Martin Hudson along with a lovely review of Shining Morn which you can read by clicking the icons at the bottom of this page.

JHS have taken out a full page advert in the magazine for my new signature guitar and the magazine is running a competition to win the aforementioned instrument, this one however is for magazine subscribers only. ( If you would like to join the CRS or subscribe to this excellent music magazine you can do so HERE )

This will be the second competition of its kind to win one of these outstanding guitars. Speaking of which...the 12 string has arrived and is currently with Rob Armstrong and is resplendent in its new bespoke case with the brass plaque saying Vintage Gordon Giltrap. Well, at my age I guess I am vintage...grin.

The first of the Four Parts Guitar concerts will be getting underway soon and we shall keep you abreast of any new upcoming dates. These shows will be a feast for all lovers of the guitar I promise you! Booked so far : 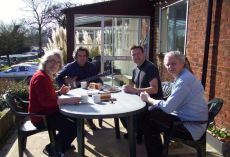 I’m delighted to report that the DVD created by myself and Harold Houldershaw to promote the GG Signature guitar has been completed and has worked out brilliantly. The company are over the moon with it, and they say that it has exceeded all their expectations. Anyone purchasing the GG guitar will receive a DVD as part of the package. It is the perfect promotional tool not only for the GG guitar but for the AV3 semi electric that I have been using of late for the Dodo’s Dream. The DVD contains several performance pieces and humorous out takes. The whole thing looks and more importantly sounds great. We shot the whole thing in one day and I still can’t believe how well it has turned out....nuff said methinks!

I’m currently working on some corporate music for a company which I think I mentioned last month. The piece is going well and the clients are very pleased. The piece has been put together with the help of Paul White in his Malvern Studio. I’m even playing bass and electric guitar on the track. This could be the start of a return to my prog rock days... watch this space.

One of the great pleasures of my life is composing for a commission. This sort of thing can be challenging and daunting at the same time. With the dreadful news of Rob Armstrong’s fire casting a shadow over things, the last thing I felt like doing was composing. Well, the clouds have started to lift and I’m back in the saddle so to speak. The problem is writing something that doesn’t sound like something I have written in past. It’s a sad thing when you start stealing things from yourself, and I do have distinct trademarks so I have been told with these old tunes of mine. I just hope the gentleman in question who has commissioned this for his lovely wife will be happy with it. We live in hope! 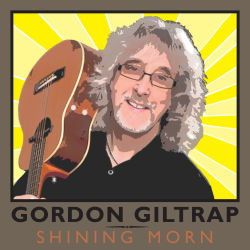 Reviews for Shining Morn are coming in fast this month, click the icons at the bottom of the page to read the latest from Classic Rock Presents Prog magazine and Guitarist Magazine or go to the discography page for even more.!

Many people rave about guitarists like Steve Hackett, Steve Howe and Anthony Phillips, but I think Gordon Giltrap is one of the most underrated British guitar players around. His technique on the acoustic guitar is quite unique and is probably of an even higher calibre than these aforementioned musicians together. During the seventies Giltrap stood in the spotlights of people who loved progressive rock music. I considered albums such as Visionary (1976), Perilous Journey (1977), Fear Of The Dark (1978) and Peacock Party (1979) to be musical highlights on which he displayed his talents on both the electric and the acoustic guitar. The mostly instrumental tracks also contained some very tasteful keyboard work that was a treat for my ears. His music never got boring and the instrumental piece Heartsong from Perilous Journey even gave him a hit single in the U.K. However, owing to the rise of punk and new wave, many artists from that era fell into oblivion.

However, in 2006 I heard a sign of life from Gordon Giltrap. Together with several musical friends, including Rick Wakeman, he recorded the live CD/DVD Gordon Giltrap & Friends At The Symphony Hall Birmingham. In 2009, this live album resulted in From Brush & Stone, a duo-album with Wakeman on which you can experience how great a guitarist Giltrap is. Shining Morn is a brand new album that confirms anew why he’s an underrated musician. The 24 instrumental tracks show a real master on the electric and acoustic guitar. In the booklet it’s said that he used ten different guitars. Furthermore, of all performed songs a detailed story has been written by Mr. Giltrap himself.

The music on Shining Morn is very interesting even if the pieces are mellow and slow. Thanks to the help of his musical friends he succeeds in keeping you focused on the music. The contribution of musicians on flute and violin lifts the music to an even higher level. Especially, the songs that contain flute playing made me think of the acoustic albums of Steve Hackett recorded with his brother John Hackett. Good examples are Simply Margaret and Joy Ride. On the final track, Giltrap plays together with Rick Wakeman who performs on the additional and extended version of the title track some acoustic piano. For people familiar with Giltrap’s older material it’s nice to know that he rearranged an old piece from his Peacock Party album. He played Dodo’s Dream for years during live performances, so a new version of this piece is a perfect vehicle for trying some new devices like a Boss loop station and a Boss ME50 guitar effect device. Giltrap stated that he used no synthesizers on this track, but on some tracks he used a guitar synthesizer to get a richer sound.

I found Shining Morn a very relaxing album which you should play to forget all about your daily stress. Just sit down on the couch with your partner, light some candles, enjoy a fine glass of wine and let the music do the rest. What else do we need…!