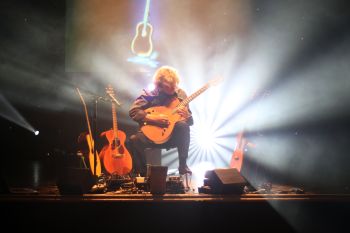 as I write this we still have five more dates to do on the tour. A tour that for me personally has been one of the most satisfying for many a year.

The concerts have been shows in the truest sense of the word with the music, lights, and back projection for me perfectly balanced. This has forced me to be a tad more disciplined in my approach to performance having to stick rigidly to the set list. This has been no bad thing, allowing me to concentrate on the pieces at hand and to tread that very thin line between tried and tested favourites and newer pieces that can take many years to get just right in performance.

The first show in Wakefield produced a standing ovation......what more can I say but "thank you" to Wakefield and to all you faithful few who have attended the shows so far. 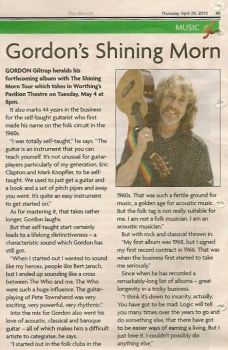 The album, for reasons I can't go into was delayed, leaving the first six or so concerts totally bereft of the album, leaving just the tour programme for folk to buy. This was very difficult for me having to apologise about the album not being available on the night.

Everyone was VERY understanding but it did leave me with a bit of egg on my face! I can't begin to tell you how let down I felt and I don't want to labour the point BUT this tour was created around the albums release etc etc etc. The good news is the CD is now in stock at online stores such as Amazon and MP3 samples have been added to the discography entry so you can listen to a preview.

The second bit of sad news is that attendances apart from maybe two of the shows have been disappointingly low. This of course in no way affected the performances... I love what I do too much to let that happen, and it isn't the fault of the folk who attended. It is just a bit depressing that after ALL the hard work that Smart Move have put into this tour there isn't the audience there for me at these larger venues, and this show does require the larger theatres to accommodate the lights and back projection to do it justice.

The UP side is that Smart Move (David Fawcett and Andy Reiss) in no way want to give up on this show, are determined to build on what we have, and plan to promote more shows next year in selected venues, hopefully kick starting the tour at a major venue... SO watch this space.

I can't single out any one show because quite honestly all the shows (in spite of the turnout) have been most enjoyable, it’s just sad that after 44 years in the business I can't attract more people with whom to share this music of mine... hey ho!

I was interviewed by the Worthing Herald prior to my appearance at Worthing Pavilion and they later published a superb review of the show by Richard Amey (see below). Please click the icon at the bottom of this page to read the preview article. 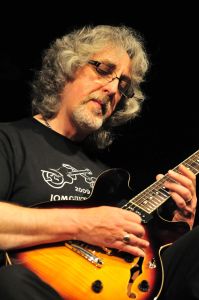 What a nice guy. Best not to muse on that relating to his once coming second to Eric Clapton in a best Acoustic Guitarist poll and finishing behind Elton John’s Song For Guy with his own utterly unique 'Heartsong' in the 1978 Ivor Novello Awards for instrumental composition. But arguably he doesn’t court spectacular luck, despite a past Top Of The Pops appearance, and other TV, and commissions, all stemming from that impact root of 'Heartsong', which winged up to No 21 in the British Top 30.

He calls this The Shining Morn Tour. There are just 14-dates between April and June with only Doncaster, Cannock and Wakefield any way north. And, would you believe it, his new album set for release to coincide? It’s called Shining Morn, on Floating World records, has several classic past tracks in re-take, and Rick Wakeman guests on the closer. . . . yes, it’s been delayed.

Richard Amey of the Worthing Herald

At the end of the day I still have one of the best jobs in the world and as a human being have everything anyone could wish to ask for, apart from a zillion quid in the bank... grin..

At the end of one of the concerts I was out in the foyer meeting greeting and signing stuff, when a charming lady came up to the merch table and said "can you sign this please" and handed me a programme. She asked. “Can you see that gentleman standing over there ?" and directed my gaze to a man standing at the back of the room supported by crutches. She then said.  "That is my husband and just two days ago he came out of hospital after major surgery, he was determined to make this concert tonight come what may". At this I stood up and walked over to warmly shake this remarkable man's hand and thank him profusely for attending.

It is moments like this that make ALL that I do worthwhile and constantly reminds why I do it, and how privileged and lucky I am.... nuff said.


Other Concerts of Note

May 14th, Gedling. My thanks go to Paul and David for working their butts off and cramming the church with at least 160 people, proving that if you work hard enough to promote a local GG concert people will indeed turn out.

Ledbury the following day was a cracker as was Knaresborough on the 21st of May - lovely theatre, a virtuoso audience, and lovely folk organising it.

My thanks go to you all bless ya! 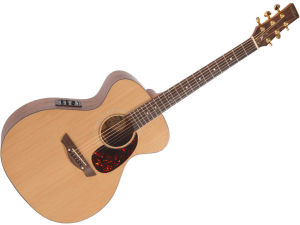 Well folks it's getting closer... The release date for the new GG Signature guitar designed by Rob Armstrong and released under the VINTAGE brand of JHS. Click the icon at the bottom of the page to read the latest Press Release, with specifications and prices.

I don't have a  fixed date as yet when folk can go into their local guitar shop to try this unique and wonderful guitar, all I can tell you is that this press release has been sent out to all the Music Biz media.


The response to the competition has been good so far, but there is still time for you to enter if you haven't yet done so, CLICK HERE for more info on the competition. The lucky winner will be announced in due course.


Guitar Heroes at the BBC

Many of you may have seen yours truly performing Lucifer's Cage on a 1976 Whistle Test appearance recently.

I'm delighted to report that Bert Jansch accompanied by his wife Loren flew out to America on the 14th of May to join Neil Young as his special guest on Neil's current US tour. This is remarkable and heart-warming news after the many many months of illness that this couple have had to endure.

I'm sure you will all join me in wishing  them well on this tour and for continued good health.

Love to all from the grey haired one...