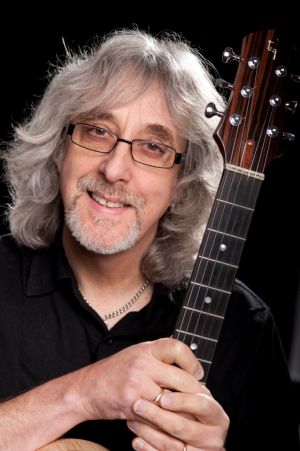 Had three cracking gigs down in God's country, Devoran on the 6th Nov, Carleen on the 7th and a gig I did about 4 years ago, Golant on the 8th. These were all intimate village hall affairs and were well attended with a very receptive crowd at each venue. Hilary and I took out a few days either side of the dates to chill out and for me to do a master class/workshop for the Weybridge guitar club. We were blessed with pretty good weather apart from one day !

Over the years many of you will have seen various images of yours truly on these pages, in brochures and on album covers. Many of these images were taken by a man I consider to be one of THE great portrait photographers around. His name is Rob Jewell.

Whilst down in Cornwall, Rob invited Hilary and I to his studio for a photo session. I'm really pleased to say that the results as far as we were concerned were very successful, and believe me when you get to my age you need all the help you can get in those areas...grin.

One of the photos taken during that session is shown above and another is the current one on the Homepage.

I just wanted to give a little potted history of our deep friendship with that genius of guitar making Rob Armstrong and his partner Sheila Rigg.

I met Rob in 1987 at the Warwick folk club and in all honesty haven't looked back since. During the years I must have owned at least 10 of Rob's guitar including the famous Baby Guitar, the Baritone, (the Parlour guitar I used solidly for 14 years) and recently within the last few years the Polymer guitar used for the Secret Valentine album and the figure eight guitar seen on numerous posters and YouTube clips.

For me, Rob's guitars can do virtually everything from delicate picking to GG power chords ala Heartsong and Lucifer's cage. There aren't many instruments that are capable of doing both. I take pride in the fact that I'm probably THE major endorser (if that's the right term) of Robbie's instruments, and it was indeed through me that Joe Brown owns a Rob Armstrong guitar and through that friendship and association, the late great George Harrison owned three Baby Armstrong's. Rob never cashed the cheque that he received from George and it hangs proudly in a frame on Rob's lounge wall.

Rob like most gifted makers is a tad eccentric, no bad thing in my book, most geniuses are! His guitars aren't always built for comfort but by God they sound unbelievable. Much of my recorded output over the last 20 plus years features somewhere along the line a guitar with that magic A on the head stock. Anywhere in the world where I play you will see a Robbie guitar lurking somewhere on stage. My Baby guitar for instance is a permanent fixture. My Troubadour album featured exclusively my 92 model, the Baritone and the Baby guitar.

Because Rob is just one man making these extraordinary instruments in his garden workshop, he likes to keep the cost down, which is great news for any prospective purchaser not on a large budget. I firmly believe in my heart that one day his guitars will fetch fortunes, and I liken him to Leonardo for his designs, and he is to the guitar world what Stradivarius was to the violin. I know this sounds a bit over the top, but Rob's guitars continue to inspire me as a creative artist, so no higher accolade can be given in my book. 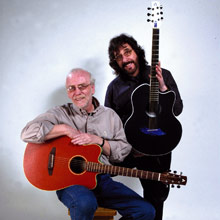 I mentioned earlier that my association and friendship with Rob (and his partner Sheila) go back nearly 24 years, and SO much has happened during that time, a time in which I have tried my best to spread the word about this extraordinary man. The fact is that Rob was making instruments  for 'named players' on the acoustic scene for years before I discovered him, for example it was Bert Jansch who first mentioned Rob's guitars to me because Bert was playing one in the late seventies and early eighties. At the time I wasn't that taken with them and my guess is that it was just the way Bert had his particular guitar strung and set up at that time which didn't suit me, but I'm delighted to say that I eventually discovered the Armstrong magic for myself and 'saw the light' so to speak. Since those early days Bert has himself owned many of Rob's guitars and currently plays a limited edition BJ model which Rob has limited to just 10 guitars each one containing a signed label by Bert and Rob. Anyone interested in purchasing a VERY collectable piece of guitar history should get in there quick.

2010 should see the arrival on the market of a Rob Armstrong designed guitar for a major manufacturer. This guitar will be associated with me and to keep prices down will of course be made abroad. It is my hope that between us we can produce a guitar that will rival anything that is on the market at an affordable price range. It would be a fine legacy for Rob and I to say that we have somehow contributed to the rapidly growing market of affordable instruments and will provide an instrument for folk on a budget that want a guitar that won't break the bank but will be of great quality with a sound to match anything out there, and to provide joy, inspiration and playing pleasure to an ever increasing legion of guitar pickers!

You keep making 'em Rob and I for one shall keep playing them.

Keep watching these future news items for exciting developments regarding this new guitar.

Anyone interested in Rob's guitars should ring him on 02476 442502, and then visit his showroom and workshop, you will love every minute! 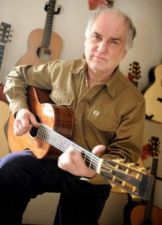 My dear friend Roger Bucknall of Fylde Guitars kindly featured me on his website in Nov. Here is the start of the very in depth article which I'm sure you'll enjoy- to read the rest, either go to the bottom of this page and click on the file icon, or follow this link: www.fyldeguitars.com/new_play.html

I've written about Gordon a number of times in the past, and this time I want to cover slightly different ground, as I think I have a privileged viewpoint of his career so far.

Gordon has been a professional musician for over 40 years, and a close friend of mine for most of that time.  He was my first customer, and our lives have crossed again and again, not just in music but at many personal times as well.  He has a stupendous talent and like other people I admire, works far harder behind the scenes than anyone would ever imagine.

The usual route to celebrity status is to concentrate on just one small area of work so that the message is continually hammered home.  Anybody with wider interests finds it rather more difficult to gain fame and fortune because the message is spread thinner and diluted.  Gordon's performances and compositions have covered a wider range than several other guitarists put together, yet despite working at the very top of his field for so long he is still acknowledged more by professional colleagues than by the record buying public ................. (article continues) ..........................

An incredible guitar talent has recently been brought to my attention and her name is Helen Marshall.

I'm pretty hard to please when it comes to other players BUT believe me, this lady is a bit special. Please do check out her other YOUTUBE features on www.youtube.com/dracapalley

There you will hear some of the most musical, magical and delicate renditions of the great Irish harpist Turlough O'Carolan's compositions played on a variety of instruments, most of them pretty cheap, but in the hands of Helen Marshall they are taken to new heights.

This young woman deserves to be heard by more people, and not only that, deserves a decent instrument that is worthy of her superb playing. I shall be personally taking steps to rectify that situation as soon as possible!

In the meantime give your ears, your spirit, and your heart a treat and listen to the magic that is Helen Marshall. 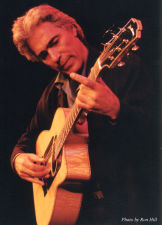 What a joy it was to be on stage in the second half of the evening to share a few tunes with my good friend the Blues Man supreme Woody Mann.

I have known Woody for many years now, and what an ego free gentleman he is. The Gulbenkian Theatre is located on the University campus in Canterbury and is a superb theatre with excellent acoustics and good seats everywhere for the audience. The concert was primarily Woody's as he is currently touring the UK, and I was invited to be his special guest. I like doing these opening spots because it sort of takes the pressure of me as being the perceived star of the show (whatever that means) but I think you know what I'm saying.

Anyway Woody invited me to join him for the last few numbers where we performed 4 pieces which neither of us had performed together before, so it was very much a seat of the pants thing. We did Maddie Goes West, Five Dollar guitar, A Christmas Carol and Great Dreams of Heaven, the last one being for me the best, where Woody trusted me to jam along with his performance, and I'm delighted to say that I got away with it ...grin. The audience were lovely and my hope is that it won't be too long before Woody and I get the chance to repeat the experience. I loved it!

I am delighted to report that I have been asked to be the guest presenter of the Classic Rock Society Awards. See the email below from Miles Bartaby:

Thank you for becoming a patron of the Classic Rock Society – we really appreciate your support.  Since taking over from Martin Hudson I have been overwhelmed by the support and good will I have received – the Society clearly means a lot to many people and I hope I can do it justice!

I don't know if you are aware but we have an Awards ceremony every year where our members vote for their favourites in a number of categories.  We like to have a celebrity from the classic rock world with us on the night if we can in order to present the awards to the winners.  I would like to invite you to be our guest presenter at the 2009 ceremony which is going to take place at Montgomery Hall in Wath Upon Dearne on Saturday 16th January.

I look forward to hearing from you. 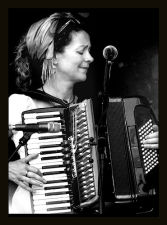 On the 19th of November the accordion virtuoso Karen Tweed did a session for me at Paul White's studio in Malvern on a track entitled Ring Of Kerry which will appear on my new album next May.

What can I say? She was FANTASTIC, a great player and a great lady with a wonderfull down to earth sense of humour. We hope to be working together on various projects in the future SO...watch this space!