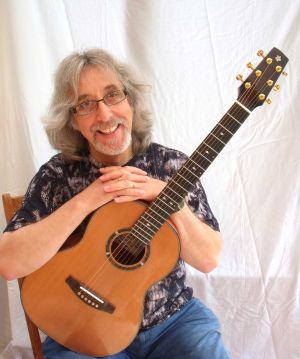 His guitar is based on my now famous CAR BOOT special that helped to create pieces like Appalachian Dreaming and Rain in the Doorway amongst others.

As you can see by the photograph, the instrument is a very fine looking beast with beautiful figured mahogany for the back and sides and cedar for the top. The most interesting and unique feature are the brass threaded inlays on the first string side of the fingerboard which allows a partial capo to be placed at various points along its length. More photographs can be found in the Gallery section here.

I have yet to explore its possibilities here but so far have recorded two new pieces on it for my new album. Roger refers to it as a Requinto, which is a small short scale guitar that has the facility to be tuned much higher than concert pitch. ( Our 'Guitar Anoraks' may wish to view the Word document at the bottom of this page where Roger himself explains more about the guitar )

It is always good to justify a new guitar and I think I have done so with this delightful new addition to my armoury of sounds.

Details for anyone interested in contacting Roger for repairs and commissions are as follows 01543 262543. He will be delighted to hear from you.

Over the next few months I shall be writing on some of my favourite guitar makers, and my history with them. A feature has already appeared a few months back on Roger Bucknall of FYLDE guitars. 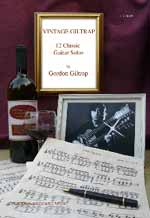 At long last the new VINTAGE GILTRAP book is officially out!

Details of where to obtain your copy are in the Discography section. The book contains 12 of my very early pieces, the earliest being Lucifer's Cage from 1968 and my second album for Transatlantic, and the latest being Melancholy Lullaby from the Fear Of The Dark album from 1979. The book is a re-working of an early publication by IMP entitled COLLECTION. This book is no longer in print and has subsequently become a bit of a collectors item. My good friend Steve Marsh of Lathkill Publications and I decided to split the book into two volumes, the later coming out probably next year.

In the meantime I do hope all those who have desperately been trying to get TAB and music for classics such as HEARTSONG and LUCIFER'S CAGE will be pleased with this new publication because I certainly am, if not only for the superb cover design by Lesley Alexander featuring an early photo of yours truly minus face furniture and holding my now famous John Bailey twin neck guitar. The photograph dates from the sessions for the VISIONARY of 1976.

This is a new offering from yours truly and details are as follows:

Over the past 40 years Gordon, as you can appreciate has written quite a body of work. Many of these tunes have become firm favourites among those who follow his music. Gordon has felt very honoured and deeply touched when told from time to time that his music has been used for special occasions and celebrations.

To this end, Gordon would like to offer his services in the form of a GORDON GILTRAP MUSIC MESSAGE CD. The CD would contain a Giltrap piece of your choice along with an individually recorded message from Gordon. The track will be an existing piece taken from one of Gordon's albums NOT a brand new recording. The message, of course, will be unique, worded exactly as you request.  The CD sleeve will be personalised with the recipients name. Each CD will be personally signed and dated, and accompanied by a signed GG photograph.

Gordon will need at least a month's notice to give him time midst all his other activities to attend to this recording.

For all those who would like a unique personal Gordon Giltrap Music Message CD for any occasion you desire, then please contact Sue Holton via the contact form.

The cost for this would be £75 included post and packing. Additional copies are available at £10 each.

Many reading these notes of mine relating to these recent private shows and indeed all the private show I have done thus far may be thinking that ''surely all of these concerts can't be as special as Gordon says they are''. Well, I can promise you that they REALLY are.

All the folks who have ''bitten the bullet'' and made contact with Sue Holton and gone for the idea of having me playing in their home or a venue of their choice, have in their own special way created an evening to remember, not just for their friends and family but also for Hilary and I by making us feel SO welcome and including us in their family celebrations after the shows. SO a special thank you to all those people who have made it happen and have helped to create a lovely memory for all concerned. 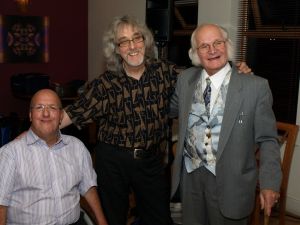 It has been my delight and pleasure to be a part of three special celebrations this month.

The  first one was just outside Warrington on the first of this month for David and Angela Pennington's father Lesley and was a special surprise birthday party.

All went superbly well and our sincere thanks go to all the friends and family for looking after us so well.

The second one of the month was in Peterborough on Friday the 7th, and was for Anthony Healy to celebrate his 50th birthday, which was held in a delightful Thai restaurant. What made the evening that little bit eventful was on our departure. We said our thanks and farewells and drove a few yards down the road to discover that we had acquired a puncture. We managed to limp back to the venue where fortunately our hosts were still there along with the remaining few guests.

With no more ado Anthony and friend Tom set to and changed the tyre for me. Anthony was dressed all in white for his special evening but this in no way deterred him from lying on the ground amid all the muck and grease. What a great way to spend your birthday eh! What a great guy, we can't thank you enough for rescuing us and indeed booking us into a great hotel.

You can read Anthony's review here

The third of this month's private shows was held just outside Kings Lynne. The original plan was for myself to perform in Robin and Lynne Houchen's beautiful garden, but the problem was that the wind was so strong on the day that it almost blew away the gazebo!

Plan B was soon put into action at their local village hall. This all happened just a couple of hours prior to our arrival, so imagine our surprise to find the village hall bedecked with balloons, coloured lights and bunting along with a specially prepared stage, giving the whole thing a great party atmosphere. WELL DONE GUYS! 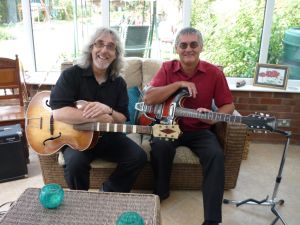 Robin like me is a keen guitarist and collector and after breakfast the following morning the guitars were duly wheeled out, amps plugged in and much fun and photo-taking commenced. It was a joy to meet their family and to receive a lovely letter from granddaughter Poppy a few days later declaring how much she enjoyed my playing and telling me that she now likes me as much as Cliff Richard…Praise indeed!

This sell out concert was such a pleasure to do, not only because £1,800 was raised towards the rebuilding of the tower but also because our friends the Reverend Martin Green and his lovely wife Louise were such great hosts. The sound and atmosphere in the church had its own special magic (see Keith Meredith's review click here ) and the audience were an absolute gift. I have offered my services if needed for future fundraising.

Martin says "we had a stunningly good evening on Saturday - Gordon was relaxed and on exceptional form. I have had so many comments from people saying how much they enjoyed it, and how amazed they were at his expertise. But then, we know ...  :) I am thrilled to say that we have made £1866.70 towards the Restoration project, which is magnificent !"

The last concert of this month was at my friend Big Jim Sullivan's club in Coolham, West Sussex.  The concert I'm delighted to report was a sell out but it was touch-and-go a few weeks prior when only a handful of tickets had been sold. What made this gig such a fun and special evening was the fact that it was our beloved web-master Sue Holton and husband Mike's 30th wedding anniversary.  The couple had driven for two hours plus to attend the concert and brought along their friend Jez, a long-standing GG fan and fine artist. Sue even brought a huge hamper of food and assorted goodies to eat after the sound check……bless her!

Our friends Jacqui and Larry turned up along with Debbie Timperley who made the glass "hands" plaque shown on the cover of the original "Double Vision" CD and also in the audience was Iain Carnegie. Iain is a superb musician, arranger and percussionist who has played on several tracks for my new studio album due for release next year.

Special thanks must go to Norma Sullivan for working so hard to make this concert so special. Oh, I forgot to mention that the audience were 10 out of 10. 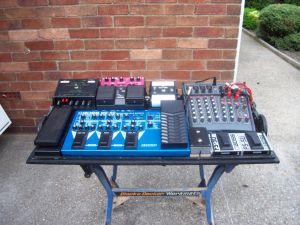 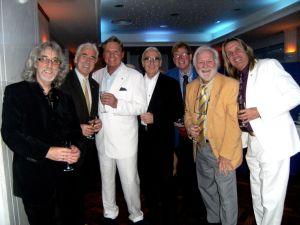 I forgot to mention in last month's news letter the wonderful evening that Hilary and I spent as the guest of the legendary Jim Marshall (he of the famous Marshall Amp) to celebrate his 86th birthday.

Jim hasn't enjoyed good health of late having suffered a stroke that has left him wheel-chair bound.  For all this, the great man rose to the occasion and seemed to be enjoying himself.  Guests in attendance included the legendary guitarist, the man who taught the world to 'Play in a Day', Mr Bert Weedon and his wife Maggie. Also on the guest list wereDec and Con Clusky of 'The Bachelors', Brian Poole of 'Brian Poole and the Tremeloes' fame, Tom O'Connor, Jess Conrad, David Berglas, Joe Brown, my old friend and 'Iron Maiden' drummer Nico McBrain, and many more.

Having Nico there was a great opportunity for me to get a few facts sorted out in a humorous way of course.  Fact 1: Iron Maiden DID adopt the same lettering style that I had in the 70s for my albums Visionary, Perilous Journey and Fear of the Dark. "Yes, indeed we did," Nico grinned, "and (Fact 2:) we DID release an album called Fear of the Dark several years AFTER your album."

So there you have it folks, straight from the horses mouth. How wonderful for GG to have such as huge influence on the 'Maiden' camp!

It is a little known fact that Nico drummed on my 'Giltrap' album for Phillips Records way back in 1973, and in the late 70s nearly joined the Gordon Giltrap Band. Me thinks he made the right decision not to, don't you?  Nico is a great guy and recently became a brother Water Rat. 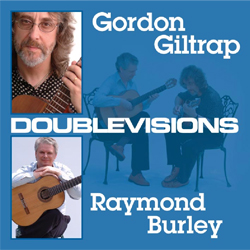 This album recorded with maestro RAY BURLEY has been completely re mastered and re packaged on the Floating World Records label and is re issued with 2 bonus tracks.

Full details in the Discography section

Be well, and see you all next month.
G.

PS: That fantastic artist Sue Martin who created many of the images on my past albums including TROUBADOUR amongst others helped to type this months newsletter whilst we were visiting her in her beautiful home in West Sussex. Sue, apart from being one of the most gifted people we have had the pleasure to know, she plays great guitar and piano as well as paints the most stunning portraits, is also one of the nicest human beings that God put breath into!
Tweet