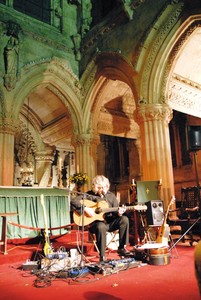 Dear friends, I'm delighted to tell you about a wonderful new book that has just been published by my dear friend Del Newman. The book is entitled A Touch From God..(It's Only Rock and Roll) A Personal View by Del Newman.

This book is a fascinating insight into the life of one of THE great orchestral arrangers living today. Throughout his working life Del Newman has worked on albums by Paul McCartney, George Harrison, Cat Stevens, Rod Stewart, Elton John and many many more including yours truly Gordon Giltrap.I consider my Troubadour album to be my finest work ever. The reason for this? It was produced and arranged by Del Newman. Nuff said methinks!

Visit my discography section A Touch From God for more information and how to purchase this essential Christmas present for any music lover.

Gordon has just returned from a tour of Scotland, complete with a sprinkling of early snow thrown in for good measure. His performances were very well received, and included one at the historic Rosslyn Chapel which was mentioned in the best selling Da Vinci Code novel.

"A few words about Scotland.

This little tour took in SO many varied and wonderful venues I really don't know where to begin.


Rosslyn was of course outstanding in terms of its history and beauty, and the organisation was good apart from the misunderstanding about folk being left out in the rain and not allowed into the venue whilst I was playing, but we have covered that, and a special huge thanks to Andrea and Cath for pulling all the stops out to make it a very special evening, cold though it was. In the end we got there.

For me the Inn at Lathones was a special night because we were able to spend some quality time with our dear friends Chris and Jill Morris. I have known Chris since I was in my late teens, in fact Chris was part of a crowd that helped me to grow as a musician within their creative circle, in fact I believe I was with Chris the first time I saw Bert Jansch live way back in 1965!

It had been nearly twenty years since I had played the Eden Court Theatre in Inverness. That in itself is a worrying thought that time is passing by FAR too quickly these days, and when you reach my age it really does give one time to stop and reflect on it all. At least I have many good things to show for that time, so all isn't doom and gloom! Eden Court is haunted by the way!

The Loft near Forres is potentially a great little venue, but sadly the ticket sales didn't warrant the big upstairs room being opened.

Just before the Loft gig I popped into BBC RADIO SCOTLAND for their lunchtime show which goes out live, but was repeated on the Sunday. I played three pieces, Tears of Joy. Forever Gold and finally A Dublin Day. It's always good to do local radio whenever one can and of course the good old BBC is the one to do.

Whilst we were in Inverness we bumped into the legendary songwriter Benny Gallagher and his wife Dianne who were in the area in readiness for Benny's appearance at the Pitlochry Festival. Benny is a wonderful man and a huge talent. We hope to see more of him socially as and when.

Milngavie just outside Glasgow is a great little town and the Frazer Centre is a good little space that has in the past played host to most of the major acoustic players around today. Jason who runs it along with his folks is a great guy, and very perceptive for his young years. Sadly the turnout wasn't as large as the last time I played there, but I personally enjoyed it that much more, don't know why, I just did.

Our final date on this trip was a private concert for our friend Simon at Corbridge Cricket Club. The gig was very much like the village hall gigs that I do so many of these days. The place was sold out and many who attended were there just for the event and didn't really know me or my music, so it was a great opportunity to make new converts which I hopefully did. Simon and his lovely lady Ang were great hosts, Simon in particular is a real mover and shaker and without his determination to make this special it wouldn't have been SO successful- so hats off to the both of them. You can read Simon's review on our FORUM page.

As an overview for all the dates, I think I can safely say that I played my best and folk went away happy, which is enough for me and as much as anyone can ask."
Gordon

A review of Rosslyn Chapel from Andrew D:
Thank you Gordon for such a wonderful evening. And what an evening! Lashing rain, flooding and winds weren't going to stop us making the two hour trip from Dumfries to Rosslyn though, especially as three of our number had travelled up from the midlands.

A truly memorable concert was the reward: Gordon's entry to the Chapel to bagpipes, some old favourites and some new to-be favourites I think ("Rachael's Reflections" was lovely), an impromptu acoustic-only section of "The Lord's Seat" when a circuit breaker tripped knocking out the electrics; all these things added up to an evening that I can only describe by using the word "captivating". I was grinning from ear to ear through most of it and more so when my request for the full version of "Heartsong" was played - I have never heard the full version live and that was something special, so a "Heart" felt thank you for that. The environment was delightful (if chilly) and the acoustics surprisingly good to the ear since Rosslyn is not really designed as a musical auditorium, especially for a PA system. Gordon: thank you so much for sharing the music. You are a true master and a gentleman.
Tweet