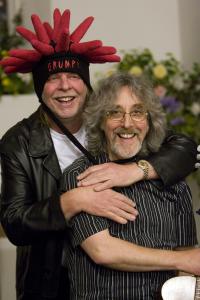 A new page has been added in the About section / Fan Reviews Click here with a review of the David Hall gig and paintings done at Conford on 9th Feb by Roger Dellar.

It was just over a week ago when I received the master mixes of the forthcoming Giltrap / Wakeman album, so it was with some trepidation that I loaded the CD into it's cradle on my CD player. Within a few seconds any fears that I had were well and truly put aside.

Erik Jordan the man responsible for mixing this project has done an outstanding job, and as you can tell by the tone of this message, I am well and truly thrilled with it all.

I know this is early days in terms of the finished product but I just wanted to give folks a taster of things to come.

First of all the title. We wanted it to pretty much say on the tin what the music is all about. The theme running through the main bulk of the album apart from two tracks, Maddie Goes West and By Angle Tarn is music inspired by two art forms, painting and sculpture, and to that end I came up with the title of FROM BRUSH AND STONE.

Rick's tracks relate to sculptural images, such as classics like The Kiss and Michaelangelo's David, and my pieces are five movements from The Brotherhood suite, the pre -Raphaelite inspired composition dating back to 1987.

The instrumentation for Mr Wakeman's tracks are simply piano and guitar, and on my tracks Rick has added tasteful string sounds and the odd French Horn here and there.

My guess is that the album, which will contain a DVD element in the form of an interview and possibly a couple of live takes will be released on the Voiceprint label in the spring, but don't hold me to that  time frame, as we haven't even written sleeve notes or planned the cover along with a photo session for the two of us.

For my part this is probably going to be the most significant album release I have been involved in for many a year for obvious reasons. Working on Rick's tracks has definitely stretched me as a musician and forced me down new and exciting avenues, but at the end of the day it will be you dear listener who will be it's judge, but I know in my heart that I can probably die a happy man with my contribution to this project in terms of Rick's tracks, and I for one am proud to be associated personally and professionally with one of the worlds great keyboard giants. 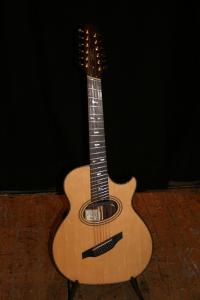 There is a new page in the Guitar Anoraks section about Gordon's new fan fretted Fylde 12 string, along with a few pictures of it taken at Fleet on 2nd Feb Click here

There is now a new photogallery of pictures from the 2nd Feb gig at Fleet, featuring pictures by Margaret Stranks as well as some by Sue Holton.  Click here

GUITAR PHOTOGALLERY UPDATED
Some extra pictures have been added to this gallery. Click here

Gordon is pleased to announce that ACOUSTIC magazine are continuing his Acoustic Troubadour column for another twelve months.