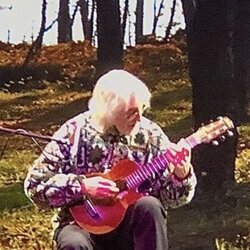 First of all Hilary and I wish you all a happy, healthy, peaceful and safe New Year.

Fortunately I recovered from my “super cold” that almost stopped me from appearing at The Great British Folk Festival and was able to crack on through the remainder of December doing my very enjoyable ZOOM chats. More of that later in this news page.

Yes, it’s a bit blurred but here I am playing my beautiful new Fylde Baby Guitar on stage at the festival. Hope you like the backdrop!

For those of you who don’t embrace Facebook, here are a few of my postings that you may find interesting. I have two FB pages, one public for my music and the other private for friends and family. You can read some of the posts below.

Memories of early sessions for the BBC 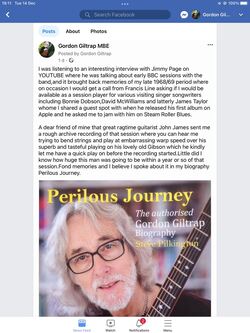 I was listening to an interesting interview with Jimmy Page on Youtube where he was talking about early BBC sessions with the band, and it brought back memories of my late 1968/69 period where on occasion I would get a call from Francis Line asking if I would be available as a session player for various visiting singer songwriters including Bonnie Dobson, David McWilliams and latterly James Taylor whom I shared a guest spot with when he released his first album on Apple and he asked me to jam with him on Steam Roller Blues.

A dear friend of mine that great ragtime guitarist John James sent me a rough archive recording of that session where you can hear me trying to bend strings and play at embarrassing warp speed over his superb and tasteful playing on his lovely old Gibson which he kindly let me have a quick play on before the recording started. Little did I know how huge this man was going to be within a year or so of that session. Fond memories and I believe I spoke about it in my biography Perilous Journey. 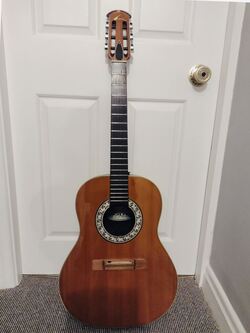 Yes I have done it again! I saw this 1981 Ovation Country Artist for sale advertised locally on Facebook Marketplace. The price was very reasonable so I popped round to try it. I guess in all honesty I bought it for nostalgic reasons and also it being nylon strung it could well be a good recording tool. Obviously some parts are missing like strings and pickups but it did come fully strung with all the electrics intact. They have been temporarily removed for my good friend Keith Tromans to check them out and make possible a few minor alterations to the preamp. Once done I shall report back next month.

Many of you may remember me in the glory days of the GG band using several Ovations on stage. They had great necks and gave a pretty good assimilation of an acoustic sound live that could compete with bass and drums. 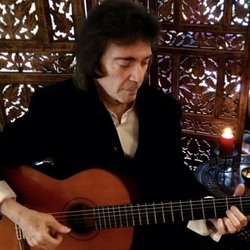 Unbeknown to me our dear friend Carrie Martin campaigned for almost three years for me to be the recipient of an MBE. One of the people she approached was the legendary Steve Hackett of early Genesis fame. Steve went out of his way to say good things about me which I’m sure contributed greatly to getting the honour. Only recently I sent a long overdue Thankyou to this great musician. He replied virtually immediately and we plan to meet up early this year. I reminded Steve of the time we met many years ago at the sadly missed Redan Recorders Studio where I recorded many of those early mid 70’s albums. 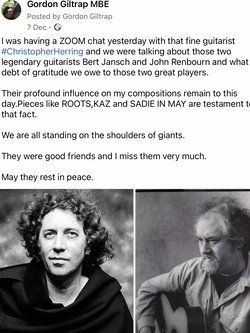 I was having a ZOOM chat yesterday with that fine guitarist #ChristopherHerring and we were talking about those two legendary guitarists Bert Jansch and John Renbourn and what a debt of gratitude we owe to those two great players.

Their profound influence on my compositions remain to this day. Pieces like Roots, Kaz and Sadie In May are testament to that fact.

We are all standing on the shoulders of giants.

They were good friends and I miss them very much.

May they rest in peace.

Do check out Chris Herring on YouTube. Also his album of my tunes on MirrorNoir records. Astonishingly gifted man. All played on beautifully crafted instruments he made himself. Thank you Chris for embracing my music the way you do, I’m deeply honoured and touched. 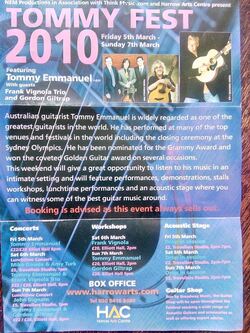 Another special memory of time spent with Tommy Emmanuel back at the hotel sharing music together. Sent by a fan and posted on Facebook.

"Came across this flyer that reminded me that every Easter Bank Holiday weekend for 5 years on the trot l would run the Tommy Fest with Tommy Emmanuel, guests included Martin Taylor, Albert Lee & Hogan's Heroes, Gordon Giltrap MBE, Frank Vignola Trio, Joscho Stephen Trio, Thom Bresh and many more as well as the likes of Mike Dawes, Jon Gomm, Gareth Pearson & Tom Gamble taking part in workshops or performing on the acoustic stage. These were great events."

Another nice memory and I remember a special couple of hours spent with Tommy sharing music after the show at our hotel.

Song of the Day for Tuesday, December 14th

Our American friends Tim and Lori Blixt requested this to be part of a daily Blog that John Keenan posts. Nice to hear this old chestnut again. I have always loved Ray’s second guitar part which although very dominant for some reason on this recording is still lovely. Extract from the blog below.

Today's "Song of the Day!" is an instrumental by renowned English guitarist Gordon Giltrap, "A Christmas Carol," a guitar duet version with Gordon and classically trained nylon-string guitarist Raymond Burley, from their 2005 collaboration Double Vision. The song was first recorded for solo guitar on Gordon's '87 album Elegy. Double Vision was a collection of Giltrap's songs arranged for the duo by Burley. I'm pretty sure Gordon and Raymond toured England after that album's release.

Gordon's career began as a folk guitarist in the late '60s, and he is still recording and performing. Through his connection to listener Tim B. in NJ, Gordon and his wife Hilary became SOTD listeners quite a while back, and Hilary is a frequent correspondent. We hope all's well!

What I find so interesting about Gordon's art are his sources of inspiration. His first album I heard was A Midnight Clear from '88, which contained a number of entirely new guitar instrumentals inspired by titles of classic Christmas carols. Since then, I've learned that Gordon finds inspiration in works of fine art, poetry, nature, people and all the world around him.

Many of Gordon's compositions consist of layers of guitar. For live performances he has perfected a looping system that allows him to build a song on stage, overlaying bass, lead and other guitar voices on to a melody. Across his long career, Gordon has performed solo, with his own band and in collaborations with other artists, Raymond Burley and Rick Wakeman among them. 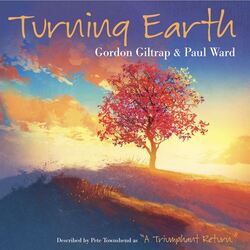 Turning Earth is now available on three main platforms; Amazon Music, iTunes/Apple Music and Spotify – others will follow in the coming days. You can buy using the links below: 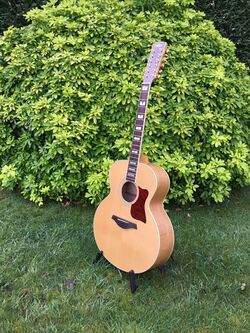 After Nathan at JHS had worked his magic, this beautiful 12 string has now been re strung and fine-tuned and really does sound great.

One hopes it will find its way on a recording sometime this year.