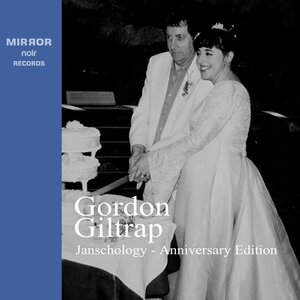 The CD should be available on /about the 22nd of November from MirrorNoir records.

Hilary and I have now been triple jabbed! Last month we went to the local town hall where they are giving the boosters, and my lovely old GP Tim Solari was there doing the injections. Tim is now retired but still doing his bit. It was great to see him. He told me he thought I looked well, which was a nice boost indeed.

I’m delighted to hear from Roger Drew partner to Em of Em’s Tune fame that she is now out of hospital after being very poorly indeed for several weeks.

We send our very best healing good wishes to them both.

My pal Piotr over there in Poland is a big Marillion fan and whist watching their recent DVD documentary interviewing Ian Mosely and his history, this image came up on his screen. Taken just before the 'Fear of the Dark' tour in 79. 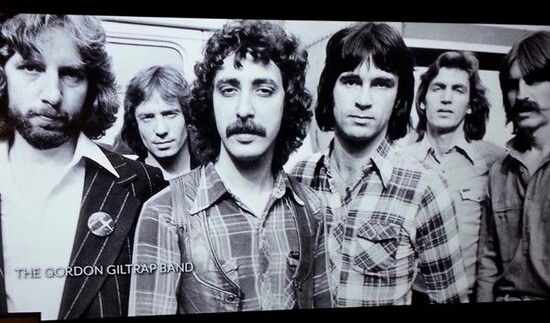 I’m not sure that Rog actually came on the tour at that time or was recruited for studio sessions, but either way an interesting moody pic. I have to say that I have seen better pics of myself that’s for sure. Check shirts were obviously fashionable way back then.

Nice to hear recently that one of my old tunes 'El Greco' was used for a clip on Gordon, Gino and Fred in Greece.

Also apparently they are showing old clips of the Kenny Everett show on TV, a year on from 'Heartsong' being a minor hit. Kenny loved the track so much he requested we make an appearance on the show.

Someone sent a clip from the TV and there was the band with John G Perry on bass, Clive Bunker drums, Eddie and Rod on keyboards and of course me on guitar.

Kenny Everett was without doubt a genius. His choral jingles were mini masterpieces, and he must have been an excellent musician. He came across as quite a shy person actually and was quite a tortured soul in his own way. Sadly missed. 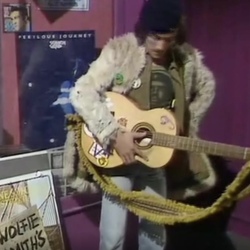 Someone put this on Facebook. I was baffled as to why, then spotted the poster!

I look back on those days with a mixture of wonder and disbelief at my brief time as a minor celebrity. Good times but sad in many ways because of the total imbalance between my personal and professional life. It’s all in the biog of course!

Another archive pic unearthed whilst Hilary has been sorting out the hundreds of photographs.

This was taken around 1996 at Mono Valley recording studios where I was invited by Tony Iommi to play acoustic guitar on a Shadows Tribute album. 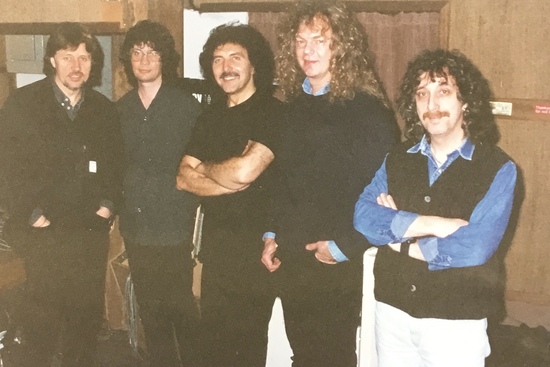 I was so sad to hear of the passing of guitar maker Graham Warren's wife Julie last month.

As you know I have owned two of Graham’s beautifully made guitars. The first appears on the HEARTSONGS album and will reappear on a new recording of 'The Stars look down on Linda' featuring Nick Hooper on second guitar. That guitar is currently owned by our friend Mark Day. The second one custom made for me is still sounding lovely and of late has truly blossomed.

Graham still has a few guitars left for sale. This one I’m really tempted to buy because I have a feeling it will sound lovely, also Graham has stopped building because of fading eyesight.

Our hearts go out to him and his family at this tragic loss. Rest in Peace lovely Julie. 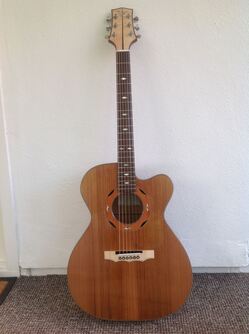 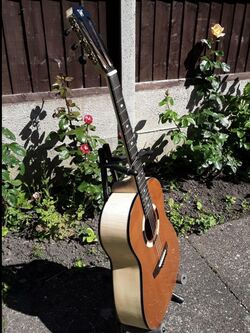 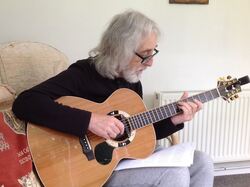 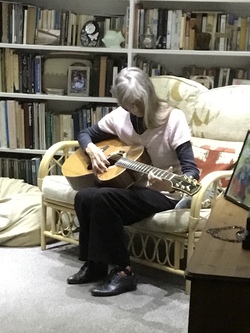 Below R: A rare pic - Hilary in a candid photo of her playing my Graham Warren guitar.

My first gig since lockdown all those months ago will be at The Great British Folk Festival in Skegness on the weekend of the 27th of this month. Needless to say I’m pretty nervous. During lockdown it gives one time to think, and I have decided to cut down the number of guitars I use. I purchased a considerably smaller FX unit and have decided to drop 'The Dodo’s Dream' from my live set. This is for a number reasons.

1. I have done it to death over the years.

2. It’s nerve-racking every time I play it hoping I don’t press the wrong pedal or screw it up. On a good night and there weren’t that many it was sublime but on a bad night, and there have been a few of them, it was painfully bad and disappointing.

I feel I can say all I want or need to say with just two guitars, a standard one and the small Viator travel guitar. Having less gear means I can set up quicker and pack up quicker at the end of the night. Also taking several high end guitars around is an incredible liability if one got damaged or stolen, and believe me these can’t be replaced whereas my Vintage JHS models to a degree can be replaced and are consistently good sounding instruments that do the job well. I will save my precious FYLDES for recording and really “posh” gigs! 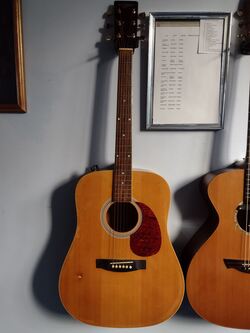 I have gone and done it again and bought another poorly Countryman guitar that needs restoring? £25 from local re- user shop.

These cheap guitars have a remarkably good sound when set up and this one comes with a pick-up.

I should get out more!!! 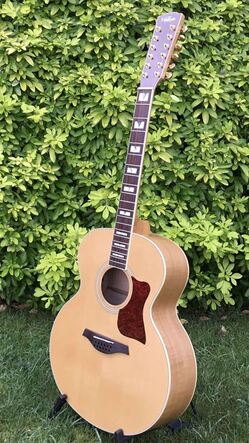 I’m delighted to report that this lovely and collectible Vintage 12 string has now been fixed and ready to go by Nathan Sharp at JHS. What a craftsman he is.

I shall report back next month once it arrives back here, probably brought by Carrie Martin who says she will kindly collect it for me bless her.

The reason I’m posting this is because our lovely bed settee is now surplus to requirements and is free to anyone who cares to get a large van and collected it. This piece of furniture is ironically a huge part of our history. I think our dear pal Carrie will have slept in it a few times! I have composed a few tunes on this old settee over the years!!