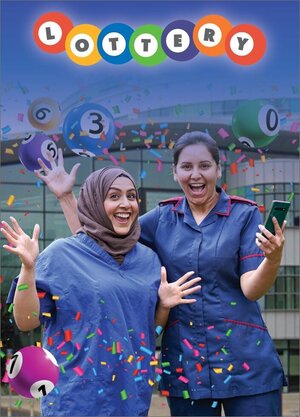 As many of you are aware I have worked with the University Hospitals Birmingham Charity on many occasions over the years.

The charity has just launched a vital new income stream which I would ask you to consider supporting – a charity lottery:

1) Can you afford £1 per week to support this very special local hospital charity?

3) Would you like to help a charity launch a new much needed income stream?

If the answers are yes, please visit www.hospitalcharity.org/lottery

This is so lovely of Pete to mention me and the Levin I gifted him.

He is truly one of the few legends who has truly invited me in to his life and world. All a great privilege.

One of the most profoundly joyful things I did recently was to do a private Zoom concert for a special lady called Deborah Ward. Debs wrote to me over a year ago with a message that truly moved me and humbled me to the depths of my being. The details of the letter were private and confidential but needless to say, my music has meant a lot to her over the years and it was a great opportunity on my part to give something back in the way of thanks to her for being so open about her life and how my music had helped her through really tough times.

Anyway it was great fun and it personally did me the power of good, to play for her and husband Tim on the evening. Nothing was written in stone and the whole thing just unfolded organically.

A huge thankyou to Debs and Tim for allowing me into their homes via this technology. It also convinced me that I could still perform in front of an audience albeit just two very appreciative and lovely people.

I plan to do more so watch this space. 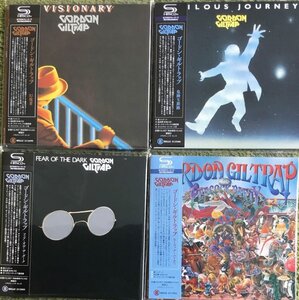 I mentioned last month about these re-releases. Well here they are and don’t they look fabulous!!!

Fascinating seeing all the credits in Japanese. I sent a copy of PP to our pals Mark and Jane Day. Mark said the clarity of the re-release was superb.

I must get around to listening to them sometime. It’s crazy because I never listen to my own albums, well, very rarely. I love listening to current material but rarely the old stuff. Bonkers really.

I mentioned in my March news page about playing on other people’s material and general collaborations with other writers, and the name of Nigel Bates came up and the work we have done together. We go under the name of Giltrap and Hat. Hat of course being Nigel and a connection with his other more way out stuff, Ha Ha Hats. 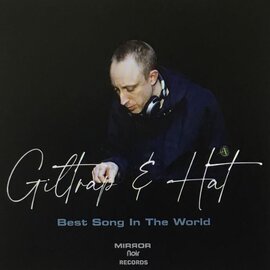 One of his earlier releases had me guesting on it and was picked up by Tom Robinson and played on his late night 6 Radio show. That was another one off the bucket list for Nigel who had always wanted to be on his show. My name I guess was a small door opener!

A new creation of Nigel’s entitled “The best song in the World” will be released on Mirror Noir records next month and I’m personally really pleased with it. Nigel plays all the keyboard parts, I of course handle guitar duties, Perry Bates is on bass and the whole thing was mixed by that genius of sound Paul Ward.

More info next month and a very heart warming and semi emotional connection with a family member will be highlighted so watch this space.

I didn’t mention this in last month’s news page because I didn’t want to inject negativity onto my News Page. The beautiful Vintage GG 2000 deluxe arrived damaged. These things happen! Fortunately the break was pretty clean and I managed to save all the bits. The guitar was returned to JHS and their head of service Nathan Sharp rose to the challenge and repaired it. You can see by the second picture that he has miraculously repaired it. 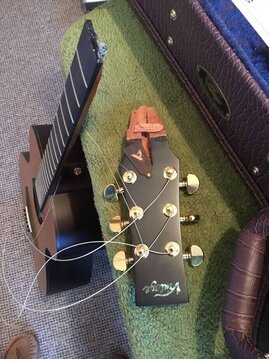 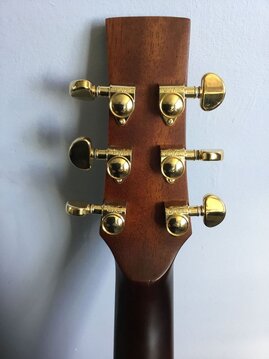 This lovely instrument is now restored to its original condition and sounds as lovely as ever. So all’s well that ends well and a big thumps up to Mr Sharp and that wonderful team at JHS. 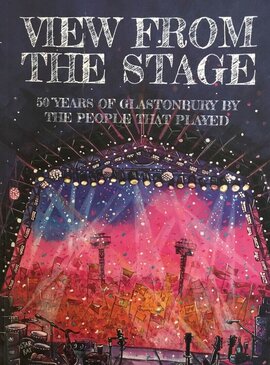 I feel very honoured to have played Glastonbury and be in the book.

The author’s contacts are in the accompanying letter for anyone interested in acquiring a copy. 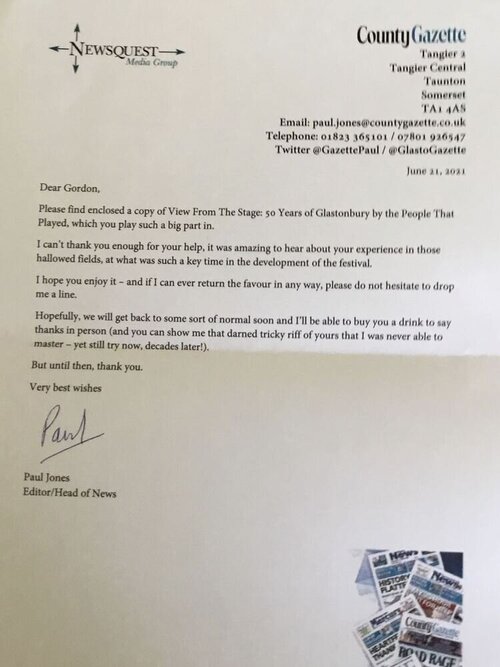 Many of you may remember this instrument that was gifted to me well over a year ago my friend Martin Green. This 1930’s KP guitar was built by craftsmen in Czechoslovakia and was in serious need of TLC. I wanted the great Steve Phillips to do the work on it but because of COVID things were put on hold. My friend Roy Coleman collected it from our home on a visit with his lovely Liz a few months back. As you can see by the photographs it has now been restored to its former glory. I have yet to visit Steve and Kate’s workshop near Robin Hood’s Bay to collect it, so am really looking forward to playing it and spending time with Steve and his lovely wife Kate who jointly worked on it. I’m enclosing some more pics, so you can see in detail the extensive work they both did to restore the poor old girl. 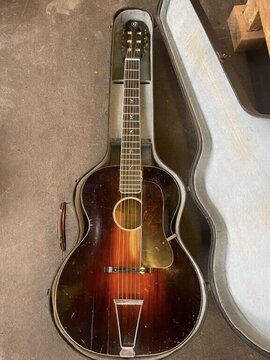 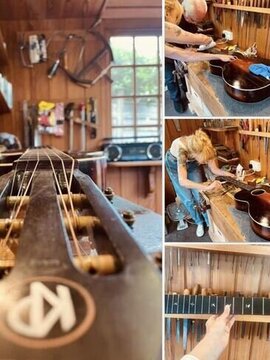 For those of you who don’t know who Steve is then I’m sure you will be familiar with the band he was in a few years back with a certain Mark Knopfler and The Notting Hillbillies. Also a National guitar that Steve sold to a young Mark Knopfler on which he wrote Romeo and Juliet and was featured on the cover of a certain album entitled Brothers in Arms!

Mr Phillips is a hugely gifted man and regarded as one of the finest blues players here in the UK. Apart from playing guitars, he makes and repairs them for a living. He is also a superb artist painting in the style of Atkinson Grimshaw.

Steve’s late father Harry was one time head of department at Leeds College of Art. There is a song on the first Dire Straits album called “In the Gallery” dedicated to Steve’s father who specialised in sculpture, mainly bronze. 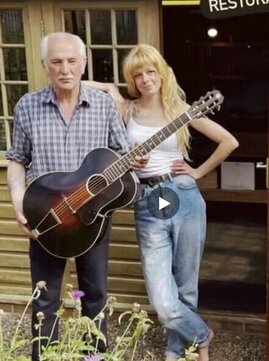 Going back to the early 70’s a young cub reporter was working for a local Leeds paper and was sent on an assignment to interview Steve. That reporter was…yes you guessed it Mark Knopfler! They became instant friends and formed a duo called I believe “The Duolian String Pickers” or something like that. Yes they have a long and distinguished history together.

Kate, before meeting, falling in love and marrying Steve was a guitar repairer for JHS working alongside none other than Chris Sharp who repaired the GG deluxe.

The story about this last photograph. It was taken from Facebook and the arrow was a link to me playing Heartsong.

Kate and Steve are two of my favourite people, and I can’t wait to see them again for a good old hug now that things are sort of opening up!!! Steve also cooks a mean Sunday roast!

This guitar is currently owned by Hilary’s nephew Jason Green. It was originally mine and bought shortly after meeting my Hilary 35 years ago. It is a Swedish made Hagstrom J45 E. It has a detachable neck and originally came with a sound hole pickup and volume and tone controls hence the two plugged holes on the front. I had it converted to a pin bridge model to improve the tone. It originally came with a tailpiece and tunomatic bridge. 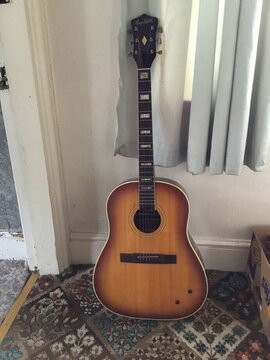 My first proper acoustic was a fixed neck version of this one sans pickup and controls. I used it on my very first album for Transatlantic so it served me well. It was based on a Gibson J160 E much favoured by The Beatles. Ironically that model had a laminated top but its Swedish cousin was all solid timber, mahogany back and side and a solid spruce top. I eventually ruined it by stripping off the original finish to give more volume and then later coating the inside with fibreglass to give more projection. This was suggested by Don Partridge as he did the same with all his guitars for busking! Oh yes I ruined a number of lovely guitars by getting the old Nitromores out stripping it back.

We were all doing it back in the day, Ralph, myself and John Martyn were all modifying perfectly lovely instruments in a quest for “more volume”. These days volume isn’t an issue with the invention of great sounding guitar transducers!