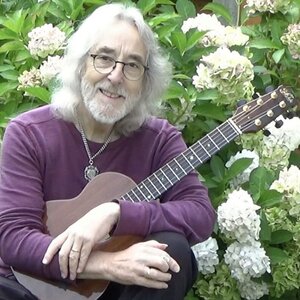 Ever since the great Roger Bucknall built this beautiful “Baby Fylde” so many months ago now I have been promising him some video footage of me playing this remarkable instrument. Obviously Covid has put a hold on so many things at the moment, but now things are easing off a tad I felt the time was right to try and get something special filmed that would truly do justice to this fine guitar.

On a Sunday last month our friends Mark and Jane Day drove down from Doncaster and spent the day filming with us. Mark and Jane are very special pals and have contributed greatly to many of my projects for The Queen Elizabeth Hospital Charity including “The Work of Angels” released via Mirror Noir and of course the choir project “You make me Believe” and other things too many to mention!

Many will know of their colourful creations and their company Fluid Fox. They do T shirts superbly tie dyed along with other items such as Tote bags and even socks! It seems their main customers at the moment are Psychotron Records and Carrie Martin.

Anyway back to that Sunday shoot! The couple turned up with film equipment and even lunch for Hilary and I (is that friendship above and beyond or what!) I had asked Mark to film me at some point because I just knew that his visual talents could extend in that direction. He rose to the challenge, purchased a superb quality camera and away we went. The weather on the day was pretty good, not blazing sunshine but clear and dry and more than good enough to film outside.

I had thought of filming it in our usual location of the conservatory but thought if the weather was good enough we could film outside. This we did and managed to get footage fit for purpose just before the rain came down.

The chosen piece to show off the sound of this world class instrument had to be “Loren” the piece I wrote a few years back in memory of the lovely Loren Jansch. I think I chose well. The footage has been placed on YOUTUBE for all to see. I hope that Loren’s family will be touched by the gesture, and that my pal Rog will be pleased with the end result. My goodness he has waited long enough!

My thanks go to Mark’s camera skills, and to them both for giving up their time and for Jane’s invaluable advice in helping to complete this special project.

I was so saddened to see the posting on my friend Paul Brett’s FB page about the passing of our old friend Michael Chapman. 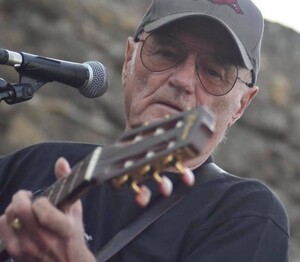 I had known Michael since the late 6o’s. I even bought a guitar from him a few years back and used it to record 'Prayer for Philippa' on my Shining Morn /Heartsongs album.

He was a great character and a great guitarist songwriter. Whenever I played in Hull back in the day I would stay over at his flat in the city.

I remember a few years back when he was on his way to a gig heading south travelling down from his home near Hadrian’s Wall where he dropped in to see us requesting a cup of tea, and asking if he watch the Grand Prix on our TV!

We weren’t close friends but had an abiding respect for our respective talents.

Rest in peace Michael. Like many of our musical generations we shall never see the likes of you again dear chap. We send our deepest condolences to your beloved lady. 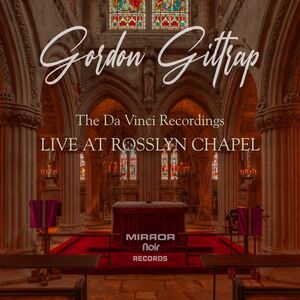 Since the Da Vinci Code was released to the film going public a few years back, Rosslyn Chapel has taken on a deep mystical and spiritual air about it, and quite rightly so.

I have vivid memories of our visit there those few years ago. The whole thing was a bit strange and unsettling at times but the organisers of the concert had gone that extra mile to make me feel valued as an artist and even hired a piper to pipe me to the stage on the evening.

On our arrival we were handed a postcard from our friend and fine musician Ray Mytton who had visited there a few days prior to us wishing us a great concert, so that was a lovely start to the evening.

The whole building is steeped in a magical beauty and maybe the events of the evening had a bearing on my performance but I don’t think it’s apparent on the recording so thank the Lord for that.

Maybe one day Hilary and I will return but in the meantime we have this recording to remind us of our visit to one of this islands historical treasures." 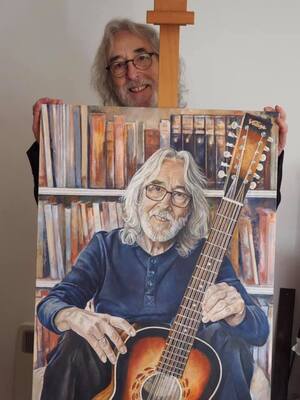 Here I am with the stunning portrait that Sue Martin did in oils.

We spent a fabulous five days with Sue last month along with her boyfriend Neil Hubbard the well-respected guitarist who has worked and recorded with some huge names in the business including Roxy Music, Brian Ferry, Robert Palmer, Joe Cocker, Andrew Lloyd Webber, Leo Sayer and many more.

Whilst there Sue organised an impromptu house concert and Neil joined me on a few tunes. It was an honour. 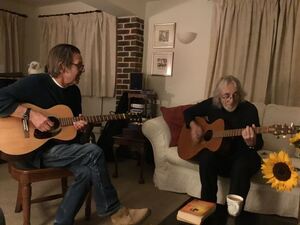 Here are a few pics of our time at Sue’s beautiful cottage in West Sussex.

One of Neil and I rehearsing for the gig. One of me with my portrait that Sue is still working on, and a pic of me with my beautiful Hilary. 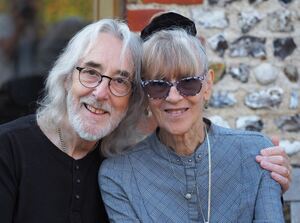 Thankyou Sue for having us and looking after us right royally. 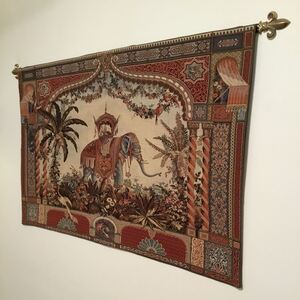 For some time now I have been thinking about putting up something on our office wall just behind our desk to take away the starkness of the plain wall when I do my Zoom lessons, and thought you all would like to see it.

Bought from EBay and skilfully hung by yours truly. I think it’s stunning.

Always loved elephants and all things related to India, having Indian blood in my veins!!

Yep, gone and done it again. Bought another guitar, this time off Facebook Market place, a fatal mistake when browsing. But the thing is that I’m currently without a 12 string since returning the last one to the distributors because of a problem with the table, which is a shame because it sounded great and whilst in my possession I did record with it which was nice.

Anyway back to this beauty. A Vintage V 700 all solid maple construction no longer made and therefore quite rare. You will notice in the photograph that it has no strings or bridge pins. That’s because it needs some expert attention to the bridge and I really don’t have the skills to do the job, but that’s not a problem because I bought it for a good price and therefore can afford to spend bit of cash bringing it back to hopefully perfect playing condition by that amazing repair man at JHS Nathan Sharp. 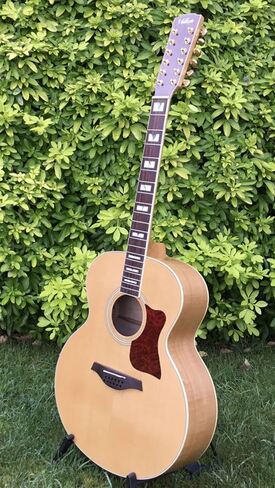 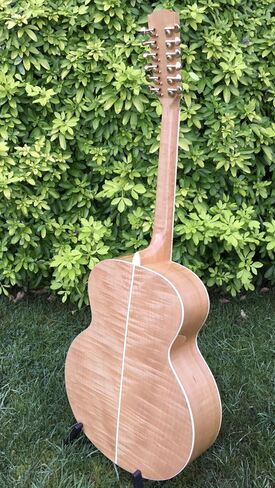 The chap I bought it from had looked after it really well bless him but not everyone is as fussy as I am to my shame when it comes to demanding perfect playability and really low action. Guitars are hard enough to play especially 12 strings and I don’t want to have to fight the thing to play it.

I shall report back in future news pages on its progress. As you can see from the photographs how lovely looking the thing is and that flame maple is just beautiful.

The V 700 is probably one of the largest size guitars you can get these days and the size is very similar to my J200 and very like a lovely Guild 12 string owned by my friend Rob Aitchison he is the person who invented the HClamp.

Fingers crossed it can be set up the way I like it I’m sure it will. 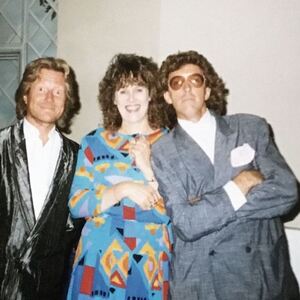 I have always liked this photograph of Hilary taken at a birthday party of a celebratory years ago.

The chap on the left I believe was the drummer with the group Marmalade, and on the right is that incredibly gifted B A Robertson who had many hits in the 1980’s and wrote that wonderful song 'The Living Years' that was a huge hit for Mike and the Mechanics. A truly stunning and timeless masterpiece of a song. He was a nice chap if I remember right. 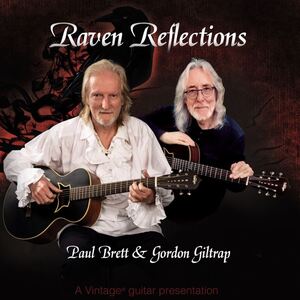 Many of you will remember the news item about the release of the CD project Ravens Reflections with Paul Brett. Here is a nice review of the album.

It was a nice little project to do. I enjoyed borrowing the guitar for the recording and it’s always nice to support a friend and endorse yet another great value instrument designed by Paul that JHS have released onto the market. I still use and enjoy the Paul Brett Viator travel guitar used to record 'The Anna Fantasia'

You can read the review HERE 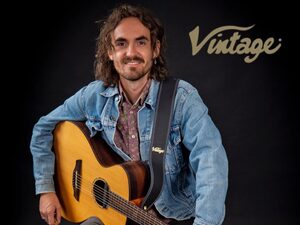 I’m so pleased to have been able to open a door between Blair Dunlop and JHS and for him to be playing my signature deluxe Vintage guitar.

Blair is up there with the best and ticks all the creative boxes in my opinion.

You can find out more via the links below. 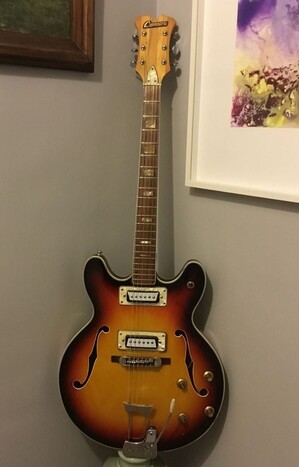 By now folk will know how much I enjoy fiddling around with guitars in a quest to “make them better.”

This lovely old 1970 Commodore semi was gifted to me and will eventually play as well as the day it was made.

I have a mind to return it to its original owner as a fond childhood memory.

These early Japan made instruments weren’t at all bad.

Once again I find that I have acquired too many guitars. I have always felt guilty when I have instruments that aren’t being used so to that end I have decided to part with a few.

I have a handmade road worn Warren acoustic, a Paul Brett Viator, a 70’s Maya Les Paul, a custom Paul White Strat, a Victorian banjo superbly restored, a Romanian classical used on the Brush and Stone album, and a Roger Williams cross over classical used for recording.

I can provide prices and photos of each item if interested, just email using the Contact form.