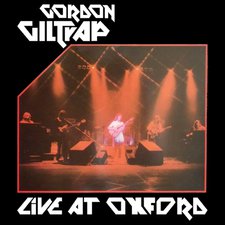 Esoteric Recordings are pleased to announce the release of a newly remastered and expanded edition of the classic album "LIVE AT OXFORD” by GORDON GILTRAP.


This is Gordon's first ever live album and was recorded at Oxford Polytechnic on 9th March 1979,by the RAK Mobile. Band members include the legendary John Gustafson on bass, whose past bands include The Mersey Beats,The Big Three and Roxy Music, also on drums was Ian Mosley who went on to join Marillion. The others players include Rob Edwards, Eddy Spence and the lovely Shirley Roden who's voice is beautiful and smooth. It's the gifted playing of Gordon that shines through the brightest, the best example can be found on Catwalk Blues.

A guitaring experience from those exciting days of the seventies with the exceptional talent of Gordon Giltrap.

This Esoteric Recordings edition is newly remastered from the original tapes and also features a lavishly illustrated booklet with new essay and interview with Gordon Giltrap.