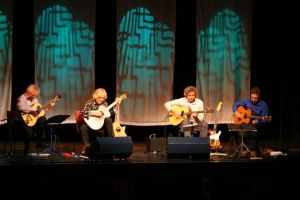 Well, the first of the ‘4 Parts Guitar’ didn’t disappoint. What a pleasure it was to see four brilliant guitarists having such a great time as they played, entertained and amazed us. Gordon, Ray and John were joined by Clive who brought his own unique style to the evening.


The first half consisted of each guitarist playing a few solo pieces in their own style. Gordon started the proceedings with favourites Shining Morn and Heartsong followed by Ray who played three beautiful classical pieces (one Brazilian I think) but by this time I was too into the music to even notice the titles. John then played Stormy Weather and a South African piece on electric guitar (the latter giving the effect of steel drums on guitar – amazing!). Clive was the final guitarist, starting with a Celtic guitar medley and then a piece on a loop station using the percussive guitar technique.

The second half started with all four musicians playing a new version of ‘The Dodo’s Dream’ arranged by Ray. What a great job he did of it too! As most of you know this is a particular favourite of mine and to arrange for 4 guitarists must have caused Ray a few headaches. He left a couple of places for improvisation which means that even with the four of them playing this piece, it will still evolve and change on each playing. Nice one Ray! Each guitarist then played pieces of their own with one other guitarist supporting them. Sometimes all four played a Gordon piece and this gave a whole new dimension to Gordon’s composing as some of his pieces lend themselves to improvisation. What guitarist doesn’t enjoy improvising? This showed the skill of these guitarists – all of them able to just fit in with each other, sometimes sight reading, sometimes not, but always with a passion and love that shone through. Several acoustic styles were covered in some way during the night and the friendship of these four was apparent as I don’t think any of them stopped smiling all evening. From the beginning to the encore a very enjoyable first concert by ‘Four Parts Guitar’.  (N.B.  Just before the encore Clive played the first few notes of ‘Layla’.  Gordon, I promise it wasn’t Eddie or me that put him up to it – but it might be next time! ).

Very hard to pick out a special part of the evening (apart from ‘The Dodo’s Dream’), but as the new boy, I do think the extra dimension of Clive’s playing added to this unique quartet and his ‘Renaissance Piece’ played with Ray was beautiful.

All too soon the evening was over and it was time to head home. Good to catch up with Gordon, Hilary, Ray, Sian, and John and to meet Clive. Also, a nice surprise to catch up with our own Sue Holton again (minus Mike this time), Eddie and Serena, and to meet Steve (the GG signature guitar winner) who kindly offered me a chance to play on the said guitar. Sorry about ripping your arm off Steve!  I have to say that the guitar is great to play, with a fantastic action from the factory. Everything you would expect from a GG signature model. Check out the Vintage website for details. I think I may start saving for yet another guitar but don’t tell the wife!