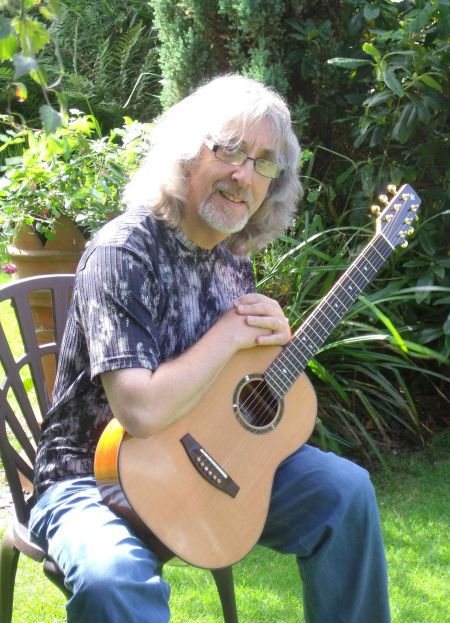 Roger says : "In 2008 I made a "Modern-Baroque" style guitar for Raymond Burley see

Both Raymond and Gordon were so taken with the sound that a little while later Gordon asked if I could make him a replacement for his famous "car-boot" guitar which he has used for many recordings and performances.  Fortunately I had worked on this guitar a few times in order to correct a number of intonation issues mainly brought about by the high open, octave tuning and the use of a capo at the 5th fret together with a single-string capo at the 10th fret; it was this very high pitch and open high tuning that gave both the instrument and the music Gordon played on it such a ringing and characteristic sound, and also gave the luthier nightmares about intonation and pitch!

So I came up with a shape and style of guitar based on a classical Requinto guitar, which as you may know is pitched five frets above concert tuning, which was somewhat similar to what Gordon was using. The scale length was chosen as 590mm, about the same as the car-boot-guitar, this allowed the use of lighter strings, a lower tension and, together with a 14 fret body join an improved reach to the higher frets.
The intonation problems that plagued the car-boot-guitar were mainly overcome by employing a very wide saddle and providing a choice of bone saddle for each type of tuning employed. This has proved to be remarkably successful, the guitar playing consistently in tune across a range of tunings and harmonics and with more scope for the future".